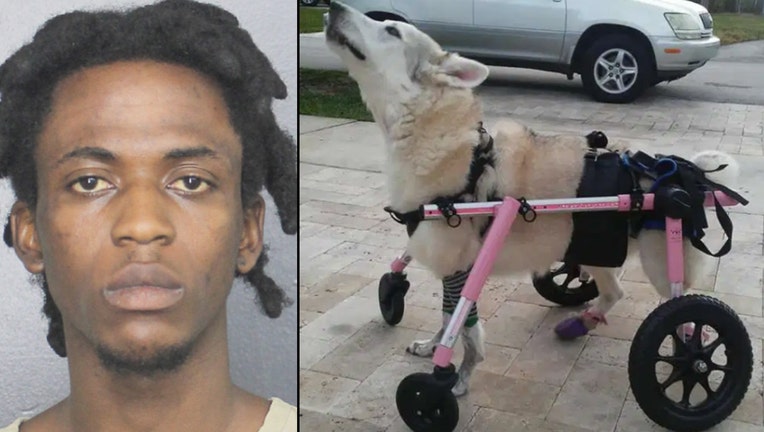 OAKLAND PARK, Fla. - Police have arrested a man in the case of a disabled dog that was found dead after the car it was in was stolen.

Investigators say Francois stole a vehicle in Oakland Park. Zorra, a 13-year-old disabled husky mix, was resting in the back seat. The station wagon was found days later at an apartment complex in Sunrise with Zorra's body was reportedly found inside.

"Zorra is gone, she is dead," Amy Roman, the founder of the group 100+ Abandoned Dogs of Everglades Florida, said in a Facebook video. "I hope that they find this piece of s--- and he pays for what he did."

The dog's owner, Wanda Ferrari, had left Zorra in an air-conditioned 2005 blue Volvo station wagon on Thursday while she ran into a Dollar Tree in Oakland Park. The dog, who typically used a pink wheelchair to get around, was lying on a pillow in the backseat, not in her wheelchair.

When Ferrari returned to her car, it was gone — and so was Zorra.

Rescue groups immediately pleaded for the dog's return. A pet detective was hired, and a $3,000 reward offered.

Ferrari said the dog was her constant companion as she deals with a breast cancer recurrence.

NOTE: Previously reported that the stolen car was located in a pond in Lauderdale Lakes. The vehicle was actually found at an apartment complex in Sunrise.