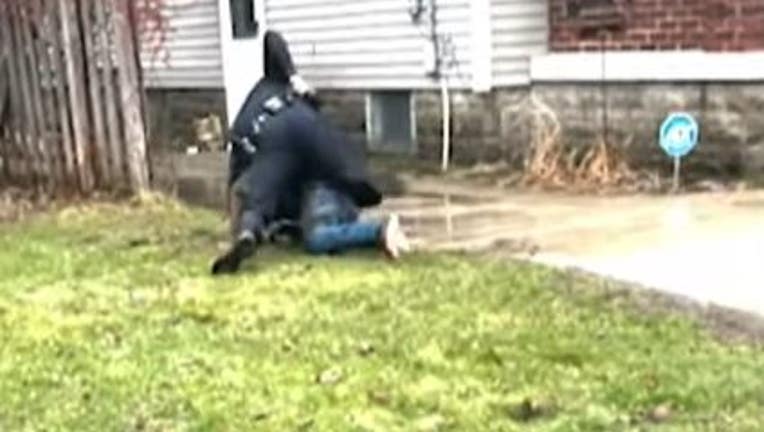 (AP) - A Michigan police officer who fatally shot Patrick Lyoya in the back of the head had no complaints of excessive force against him but much praise for traffic stops that turned up drugs, guns and people wanted for crimes, according to his personnel file.

Records released Friday by Grand Rapids police show Christopher Schurr received more than a dozen letters of recognition since becoming an officer in 2015. The incidents sometimes began with a stop because of a missing brake light or a driver’s sudden swift turn.

"Your quick and professional actions resulted in another firearm being removed from the streets and two parolees taken into custody," then-Chief David Rahinsky wrote in 2017.

It’s possible that complaints against Schurr are no longer in his file. The contract between Grand Rapids and the police union allows expungement of older records if officers complete two years without a disciplinary action.

A few past incidents that brought Schurr positive recognition turned into foot chases. A foot chase is what happened on April 4 when he stopped a car driven by Lyoya, a Black man, and said the license plate didn’t match the vehicle.

Schurr, who is white, and Lyoya physically struggled across a front lawn while Lyoya’s passenger recorded the scene on his phone.

Lyoya, 26, was on the ground when Schurr shot him after demanding that he take his hand off the officer’s Taser, according to video.

State police investigating the shooting submitted a report Thursday to the Kent County prosecutor, who will consider if any charges are warranted. Chris Becker said he still needs reports about Schurr’s Taser and body-worn camera.

A witness to the confrontation told Grand Rapids police that Schurr "did everything he could to de-escalate the situation," according to an incident report released Friday, though some experts, civil rights groups and Lyoya’s family vigorously disagree.

Schurr’s personnel file, released to The Associated Press under a public records request, reveals only a few warts. He was ordered to drive safely after causing a crash while backing up his patrol car in 2021.

That same year Schurr said he stopped a car because an air freshener dangling from a mirror could obstruct the driver’s vision. A search turned up a small safe that was subsequently broken open by a tow-truck driver at the request of another officer. A portion of a stolen gun was inside.

The search was deemed OK by internal affairs investigators, but Schurr was criticized for not reporting the broken safe, records show.

Schurr’s file shows he was assigned early in his career to the south side of Grand Rapids, where a night-shift team of seven to 11 officers was given a performance award for 2016.