(FOX 2) - Pandemic or not, Jimmy from Grosse Pointe Woods and Charlotte were getting married. Long ago they settled on a date -- April 11 -- and they were sticking to it.

“We just both said - we’re not going to let this win. We want to be married. Let’s do it,” Jimmy said.

Love over everything: Couple says ‘I do’ in virtual wedding at home

Refusing to let COVID-19 win, a couple kept their April 11 wedding date by holding a virtual wedding with family and friends that felt as loving and happy as an in-person wedding.

The first stage was a bit of denial.

“At least a couple weeks ago we were definitely still like, things will turn around, it’ll be fine -- and then it became pretty clear that it was not going to be possible to do the wedding that we had planned,” Charlotte said.

With an in-person celebration planned for August, they decided COVID-19 wasn’t going to take their anniversary date away from them. So they planned a virtual wedding.

While many of the younger attendees had adapted to the new Zoom way of life, with everything from virtual happy hours to game nights these days, other relatives were a little new to the technology.

“Older family members were kind of like, what is this? But everyone was a good sport,” Charlotte said.

“They were like, can we do it on my flip phone?” Jimmy joked.

“Right - we were like, probably not on the flip phone,” Charlotte said.

The couple beautified the house with some flowers from Trader Joe’s, and Charlotte even baked a homemade wedding cake.

Friends and family made a video full of well-wishes for the couple ahead of the big day.

“The dress that I thought I would want to wear for your special day, I’m wearing it,” said Jimmy’s mom, Maureen, tilting the camera down to show a gorgeous gray and black, sparkly dress.

“They say it’s good luck if it rains on your wedding day, and getting married during a global pandemic -- that’s gotta be superb luck,” said Jimmy’s brother, Kevin.

The big day arrived. Though it was hard for the bride and groom to stay apart before the wedding as they traditionally do, they separated for at least a few hours. Despite being in the comfort of their home, there were still some pre-wedding jitters.

“I could hear him in the living room, trying to get everybody -- trying to make sure it was going to start on time, and I was like oh, he’s nervous. But I was a little nervous too for him to see me in the dress,’ Charlotte said.

While groomsmen and bridesmaids weren’t able to walk down the aisle, there was one very, very special participant who may have made up for it -- their 1 and 1/2-year-old yellow lab.

“He steals the show at any opportunity -- he’s such a ham. We had him walk down the aisle with Jimmy -- the aisle being our hallway,” Charlotte said.

And then it was time for the big moment. As he watched Charlotte walk down the aisle toward him, Jimmy said everything felt just like he thought it would.

“First there was just a bunch of -- the tingle down the spine, a little nervous. Then it was just like a way of -- this is perfect, this is great. Seeing her come down ... that was just the moment,” he said.

“Even if we were to have everybody there, it felt like it was just her and I in the room.”

“I was worried it wouldn’t feel like our wedding day but it really did, in the moment, it was so very touching,” Charlotte said.

Though they were focused on each other, they did notice their loved ones were also feeling a few things too.

“There were definitely some tears I think from family members and friends and we have a couple screenshots that show people that look like they’re definitely getting emotional. I think we were certainly feeling emotional too. It felt very normal, legitimate, a lot of feelings,” Charlotte said. 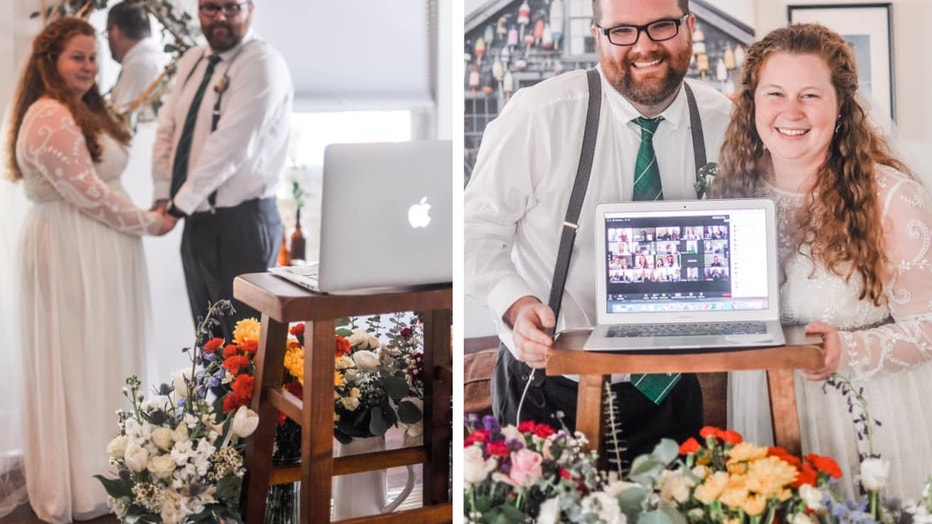 “I now invite everyone to unmute their mics .... and now what we’ve all been waiting for -- James and Charlotte, I now pronounce you husband and wife,” their officiant said.

Everything went off without a hitch - they became The Bennets, and they wouldn’t change a thing.

“During these times it was nice to have something so great and happy in our lives and I would encourage anybody who is in our position to do something like we did because it was worth it,” Charlotte said.

Until their August celebration, they’ll celebrate at home -- but they’ll do so as husband and wife.