This is a tight race in Michigan and Sanders told FOX 2 his plan on how to pay for healthcare and education for all -as well as his message to those who voted for Trump in 2016.

Sen. Bernie Sanders talks about his ambitious plans and how to pay for them with Roop Raj.

"As a member of the House, I worked as hard as I could to defeat these disastrous trade agreements," Sanders said. "Joe Biden on the other hand, supported these trade agreements. In fact, in the last year, he still does not think voting for them was a mistake.

FOX 2: "What do you tell President Donald Trump about what he did when he scraped NAFTA and came up with a new deal?"

Sanders: "I voted against it because it does virtually nothing. It has minimal impact, even owns its strongest defenders say, maybe it's a little better."

FOX 2: "What is it you wish you could tell some of those Trump supporters out there if you could?"

Sanders: "Trump supporters and not Trump himself? Trump is a pathological liar. So it doesn't matter sitting down with Trump, because no matter what you say or agree with, tomorrow his views will change. But to his supporters, that is something else.

"This is what I want to say, many people voted for Trump because they were disgusted with establishment politics. They felt that the Democratic leadership, Republican leadership, had turned their backs on the Midwest, on working people. What I would say is I can understand why you would reject establishment politics and go to Trump, but take a look at his record. I have spent my life fighting for the working class in this country. I'm not a billionaire real estate developer - I come from the working class."

>>WATCH the full interview below

Roop Raj 1-on-1 with Bernie Sanders

Roop Raj of FOX 2 sat down with Bernie Sanders for an interview ahead of the presidential candidate's rally in Detroit.

FOX 2: "What do you tell a Trump supporter who is a UAW worker and weary about their healthcare being taken away and replaced with universal healthcare?

FOX 2: "How will you pay for this when we have a more than $20 trillion National Debt?"

Sanders: "Okay, we are wasting hundreds of billions of dollars administering thousands of separate health insurance plans. Medicare for all is comprehensive healthcare. You go to any doctor; any hospital you want. we cut back on administrative cost and put that money into healthcare rather than the profits of the insurance industry." 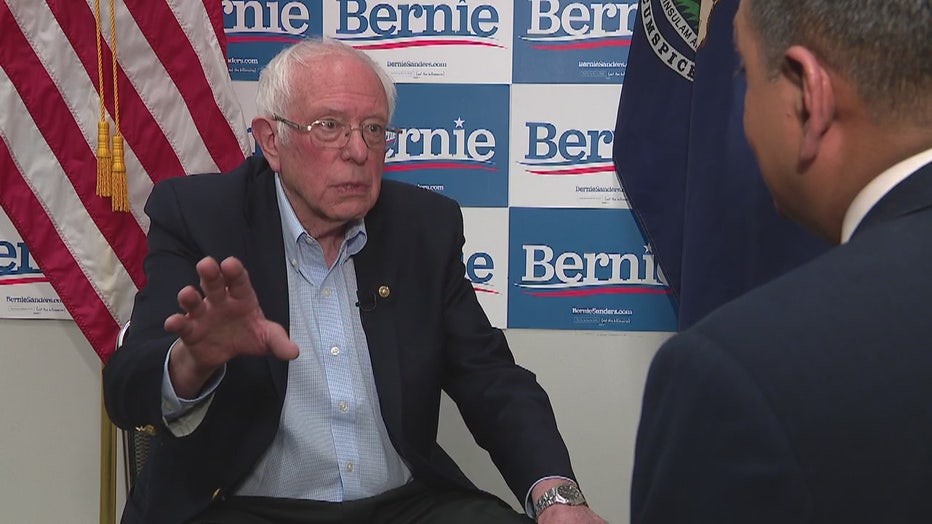