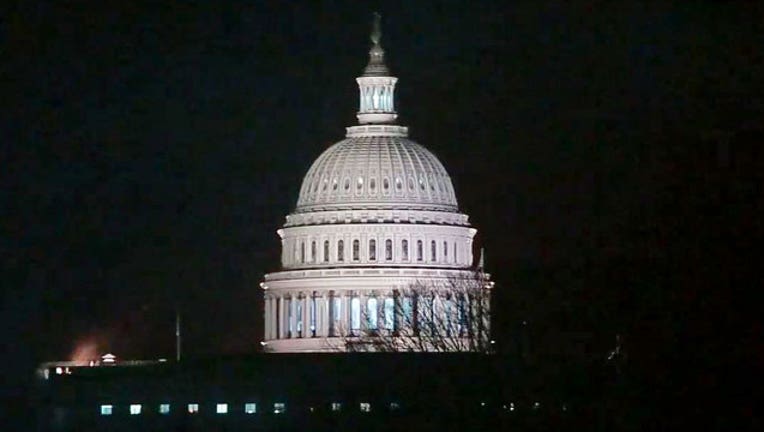 WASHINGTON D.C. (AP)- - WASHINGTON (AP) - The federal government has shut down at the stroke of midnight Friday. That has halted all but the most essential operations and marred the one-year anniversary of President Donald Trump’s inauguration in a striking display of Washington dysfunction.

Last-minute negotiations crumbled as Senate Democrats blocked a four-week stopgap extension in a late-night vote, causing the fourth government shutdown in a quarter century. Behind the scenes, however, leading Republicans and Democrats were trying to work out a compromise to avert a lengthy shutdown.

The final Senate vote on a Republican bill aimed at preventing a federal shutdown is in, and it's 10 votes short.

Friday's late-night vote means a government closure is under way. There have been no clear public signs that the two parties have significantly narrowed their disputes over immigration and the budget.

The House approved the measure Thursday over Democratic opposition. It would have kept agencies afloat through Feb. 16, but Democrats wanted a package lasting just days in hopes of intensifying pressure on the GOP to compromise.

Five Democrats voted in favor of the measure. Five Republicans voted against it.

The White House says it will not negotiate with the Democrats on immigration until the end of the federal government shutdown.

White House Press Secretary Sarah Huckabee Sanders says in a statement that, "We will not negotiate the status of unlawful immigrants while Democrats hold our lawful citizens hostage over their reckless demands."

She adds, "When Democrats start paying our armed forces and first responders we will reopen negotiations on immigration reform."

The government shut down at midnight after Congress failed to pass a spending deal.

Sanders says, "Senate Democrats own the Schumer Shutdown," adding, "This is the behavior of obstructionist losers, not legislators."

The shutdown is only the fourth government closure in a quarter-century. It will only partially curb government operations. Uniformed service members, health inspectors, and law enforcement officers are set to work without pay.