The two suspects inside were arrested by police - although no official update has been given by authorities.

ST. CLAIR SHORES, Mich. (FOX 2) - Saralina Smith's car was stolen from a gas station - and before she knew it, the thieves crashed into a utility van a couple miles away, Friday night.

"I was like, um where’s my car," Smith said. "I know I parked right by the door. We came out and it was gone and the lady’s like, 'I saw what happened - two guys just hopped in and took off.'"

"And then before I could report it to the police, they said 'Oh we’re already chasing it down and he won’t stop,'" Smith said.

About two miles away, witness Gary Whinthrop was inside the 7/Eleven at Little Mack and Eleven Mile buying something to drink.

"I see a car flying by and out of nowhere I hear a loud crash and everything," he said. "I look out there and I see the car just completely smashed up, and I see a bunch of cops just surrounding them."

The car thieves had crashed into the van. The two suspects inside were arrested by police - although no official update has been given by authorities.

The driver, a 22-year-old, was taken to the hospital but is expected to be okay.

Saralina Smith found out what happened - at the same time FOX 2 did.

"I just got here like you guys are, I stumbled across this," she said. "I'm trying to piece together the story - the whole thing doesn’t even seem real.

"But it’s real and it’s happening right in front of us. I’m just outdone, shaken, I don’t know what’s going on."

Smith's son able to get their belongings out of the car before police had it towed, now evidence in a crime.

"It happened so fast and then (I) was like talking to the insurance company and they're like what are the damages and I said - what part of it just happened don't you understand," she said. 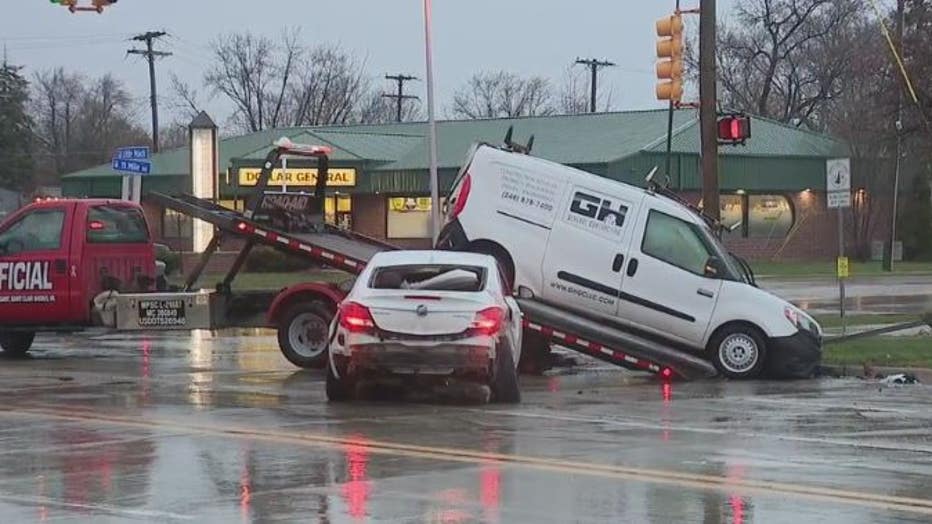