The Arctic may now be accelerating global warming due to melting permafrost, NOAA report finds

The NOAA's 2019 Arctic Report Card found that permafrost region ecosystems could be releasing as much as 1.1 billion to 2.2. billion tons of carbon dioxide annually.

LOS ANGELES - The Arctic is undergoing widespread changes as a result of global warming that are restructuring the entire ecosystem, and a new federal report found that the Arctic region may have already passed the tipping point into a climate feedback loop that scientists have long been dreading.

The National Oceanic and Atmospheric Administration released its 14th Arctic Report Card Tuesday, and the findings across the board reveal deeply troubling changes across the Arctic region, but especially in the context of how quickly permafrost is melting and releasing carbon into the atmosphere.

ARC 2019 found that permafrost region ecosystems are releasing net carbon to the atmosphere in levels high enough that the Arctic region may already have become a global warming accelerator, as scientists have feared and predicted for years. 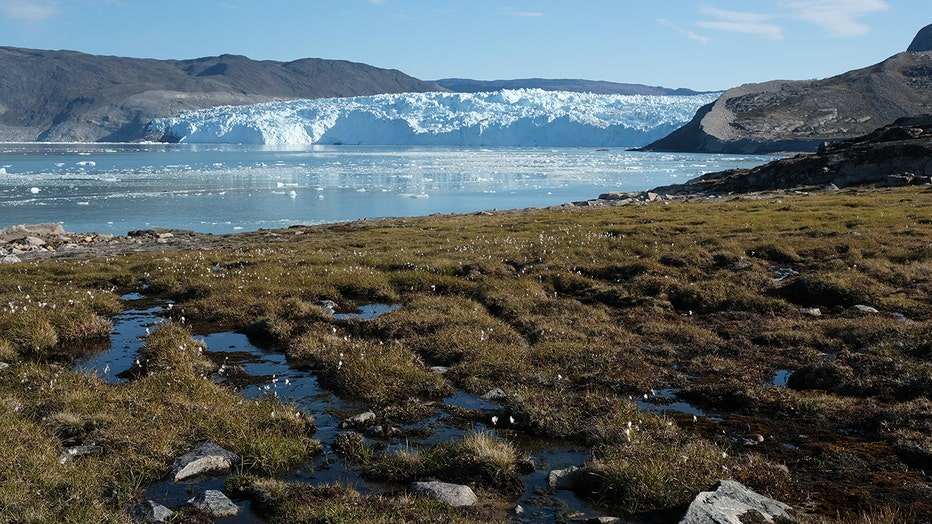 EQIP SERMIA, GREENLAND - Water from the Greenland ice sheet flows through heather and peat as the Eqip Sermia Glacier stands behind during unseasonably warm weather on August 01, 2019. The nearby Eqip Sermia glacier is located approximately 350km nor (Sean Gallup/Getty Images)

Permafrost is carbon-rich frozen soil that typically remains at or below freezing (0-degrees Celsius or 32-degrees Fahrenheit) for at least two years, and it covers approximately 8.8 million square miles of the Northern Hemisphere’s land mass.

Permafrost is currently estimated to contain about 1,440-1,600 billion metric tons of carbon — this is about double the amount currently present in the Earth’s atmosphere. As air and ocean temperatures rise, the permafrost melts and releases its carbon stores. Microbes in the soil then decompose the carbon, which releases two greenhouse gasses — carbon dioxide and methane — that are then released into the atmosphere and contribute further to global warming. 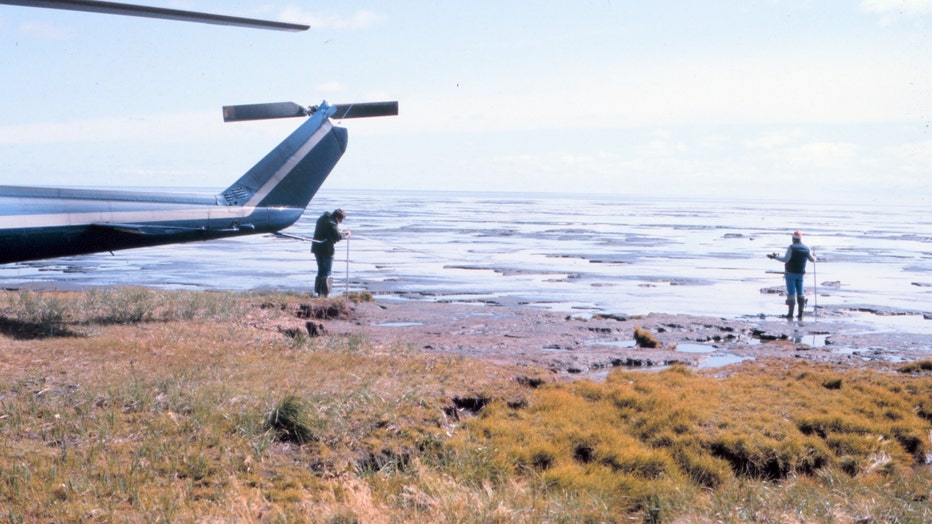 Utilizing new studies that measured regional carbon emissions from permafrost in Alaska during the warm season as well as the ecosystem-atmosphere carbon exchange of the region (i.e. how much carbon is released versus how much is absorbed by vegetation), the report was able to determine that permafrost ecosystems could be releasing as much as 1.1 billion to 2.2 billion tons of carbon dioxide annually.

“These observations signify that the feedback to accelerating climate change may already be underway,” the permafrost chapter of the report warns.

Melting permafrost is only one of the dramatic findings of the report.

The average annual land surface air temperature in the Arctic for Oct. 2018 to Aug. 2019 was the second warmest since 1900. 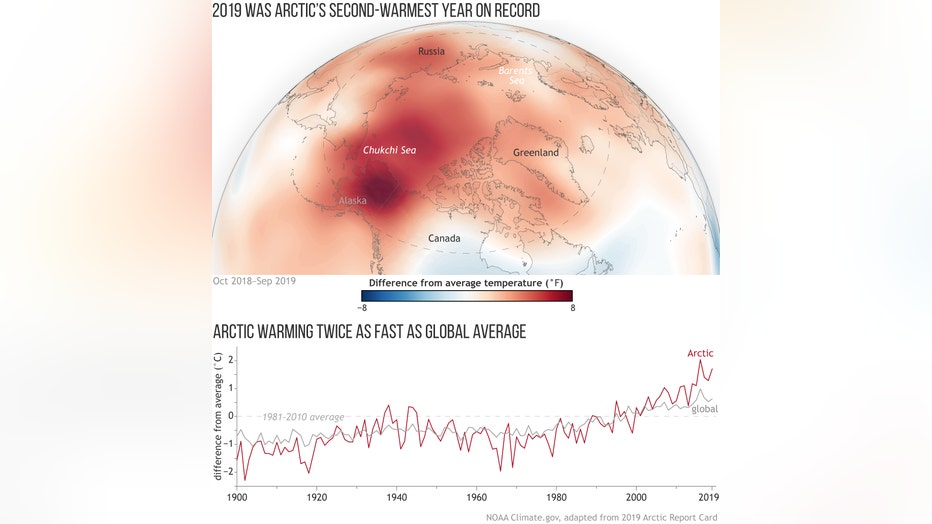 This map shows air temperature from October 2018 to September 2019 compared to the 1981-2010 average (the meteorological year in the Arctic doesn’t follow the calendar year to avoid splitting the winter season). The graph shows Arctic (red) versus gl (NOAA Climate.gov adapted from ARC 2019)

As a result of melting permafrost, Arctic summers are now warmer, which has changed the vegetation of the ecosystem, leading to a greening of the tundra on the North Slope of Alaska, mainland Canada and the Russian Far East. 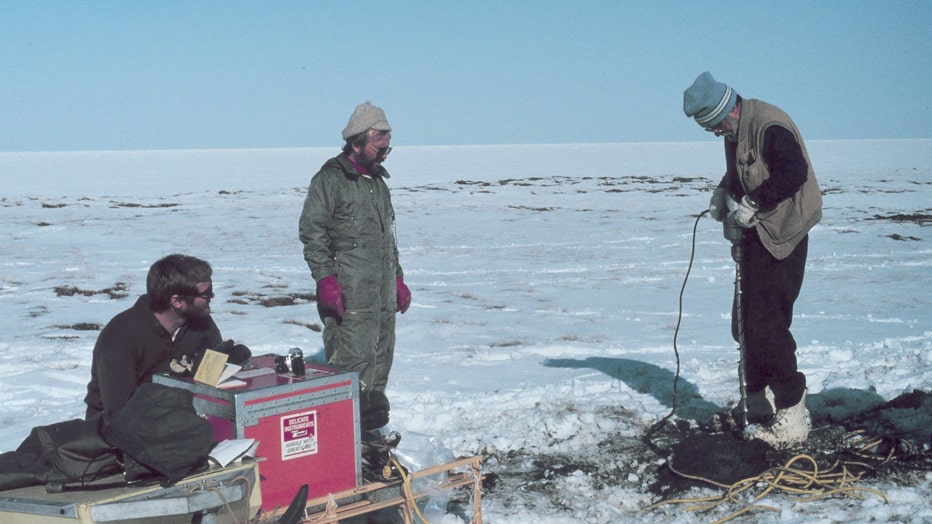 This year, North American snow cover in May was the fifth-lowest in 53 years of record, and June snow cover was the third lowest.

The Greenland Ice Sheet is shrinking dramatically, losing nearly 267 billion metric tons of ice each year, and this contributes to rising sea levels and will contribute to widespread coastal flooding in the years to come. The extent and magnitude of ice loss from 2019 rivaled 2012 for the year with highest record ice loss. 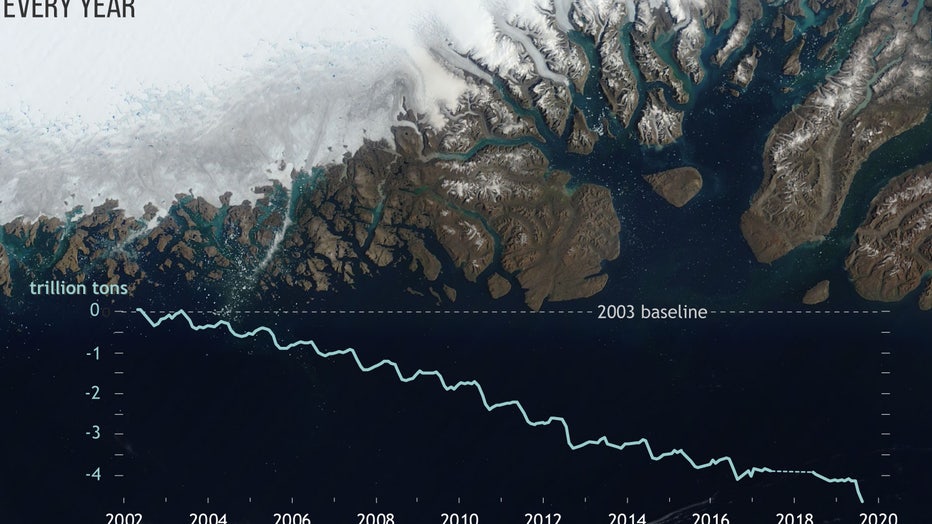 The satellite image shows blue melt ponds and streams (in sapphire blue) along the low elevations of the ice sheet. Grey areas show where snow has melted and dirty ice is exposed. The graph shows month-to-month changes in Greenland’s ice mass from Ap (NOAA Climate.gov adapted from ARC 2019)

These are just the effects occurring on land.

In August 2019, average surface temperatures recorded in the Beaufort and Chukchi Seas, the Laptev Sea and Baffin Bay were 1-7 degrees Celsius warmer than 1982-2010 August averages. 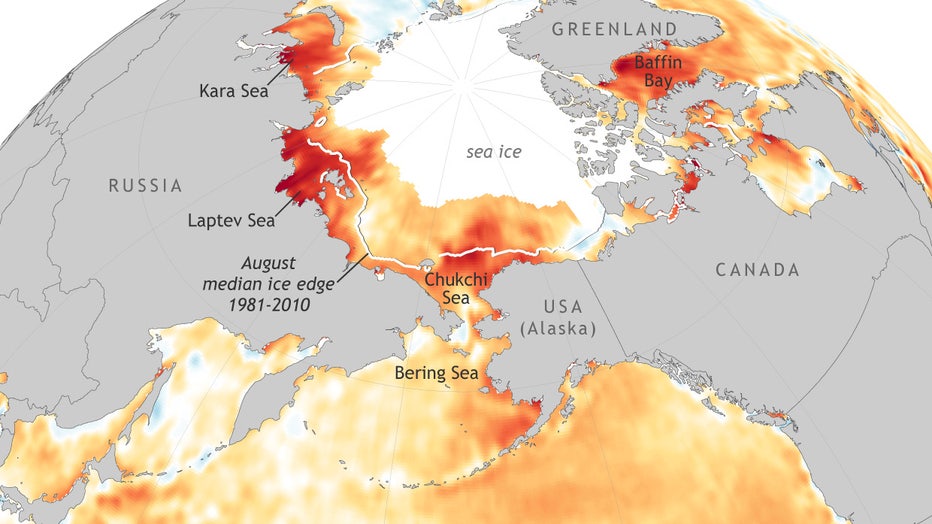 This map shows the sea surface temperatures across the Arctic in Aug. 2019 compared to the 1981-2010 average. The solid white region is covered by at least 15 percent sea ice, and the white line represents the 1981-2010 average ice extent. (NOAA Climate.gov adapted from ARC 2019)

The report found that Arctic sea ice at the end of this summer was the second-lowest in 53 years or recording, since satellite observation was initiated in 1979. The thickness of the sea ice is also decreasing, which, in turn, makes the ice cover much more vulnerable to warming temperatures.

Bering Sea ice extent hit a record low in 2018, and 2019 missed breaking this record by a very narrow margin. The report found that the ice level is 70-80 percent below normal, and the NOAA noted that the region has been “nearly ice free for two years.” 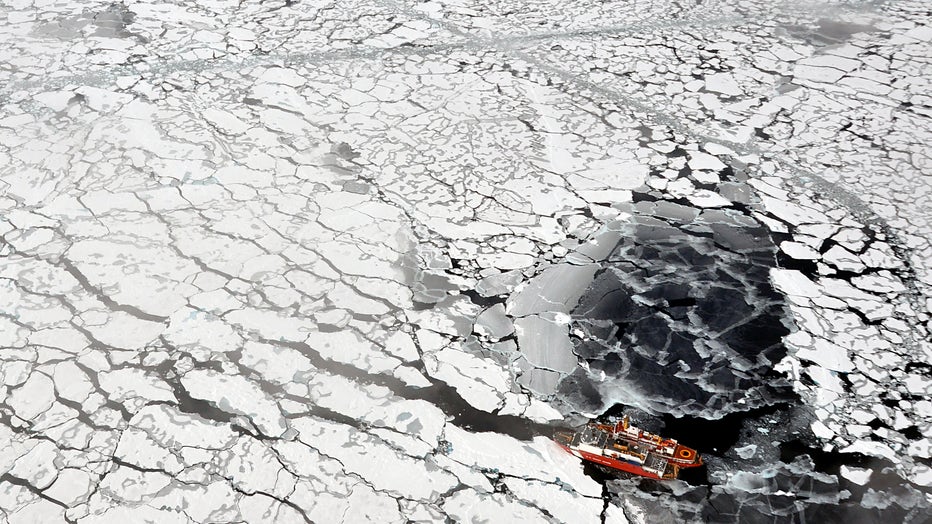 These changes in sea ice and ocean temperatures are impacting the entire ecosystem, causing certain wildlife populations to become stressed and forcing them to change their habits.

The breeding population of the ivory gull in the Canadian Arctic, for example, has declined by 70 percent since the 1980s.

Arctic fish species have been shifting to more northern waters, where it’s colder, and commercially valuable southern species are also moving north to take advantage of changing conditions. This is affecting the fishing industry in the Bering Sea, which the NOAA refers to as “the world’s most productive fishery.”

Indigenous Elders from the Bering Sea region shared their experiences of living on the forefront of climate change in both a letter included in the ACR 2019, as well as in a video produced by the NOAA on the report. The Bering Sea Elders are a group that represents 70 indigenous communities across the region. 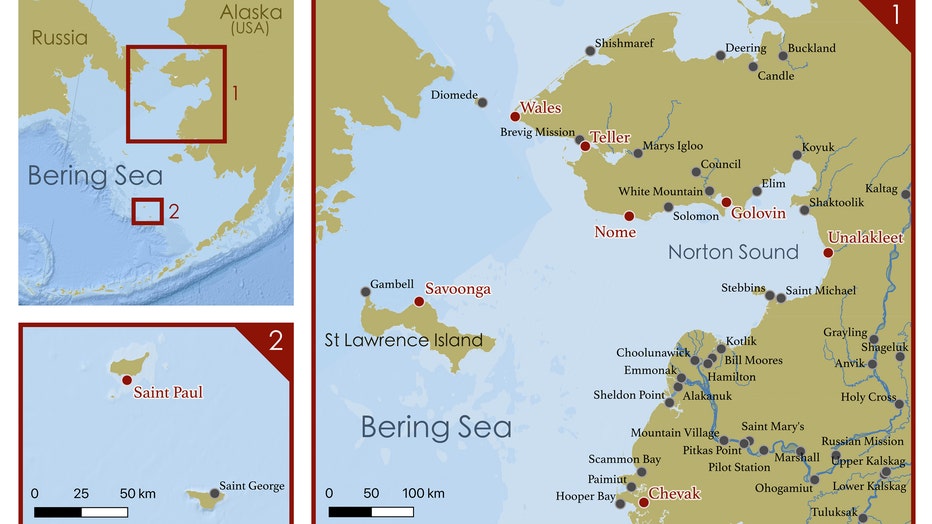 This map shows Alaska communities throughout the Bering Sea region. The Indigenous Elders who authored the letter for ARC 2019 came from the area marked with red dots. (NOAA Climate.gov adapted from ARC 2019)

“We are peoples of the world's richest sea. We study the ocean and weather as a way of life, as a means for survival,” the Bering Sea Elders wrote. “The Bering Sea is undergoing changes that have never been observed in our lifetimes, but were foreseen by our elders decades ago. Global climate change is one of many forces beyond our control that are threatening the entire Bering Sea food chain, of which we are a part... The evidence exists along our coastlines, in our waters, and is revealed through the hardships we face in bringing harvests home to our families and communities.”

“The speed and trajectory of the changes sweeping the Arctic, many occurring faster than anticipated, makes NOAA’s continued investment in Arctic research and activities all the more important,” said retired Navy Rear Adm. Timothy Gallaudet, Ph.D., deputy undersecretary of commerce for oceans and atmosphere at NOAA, who led the news conference where the report card was released. “We need the best scientific information to support NOAA’s efforts to better understand how environmental change is affecting the Arctic and weather around the globe, to support adaptation and economic opportunities in the region, and to sustain our ocean-based Blue Economy."