It's been 33 years since Huel Perkins first arrived in Detroit and he never left. Now he's saying goodbye after an incredible career at FOX 2.

SOUTHFIELD, Mich. (FOX 2) - The name Huel Perkins immediately conjures integrity and compassion as the adopted Detroiter made this city proud. As he steps away, he'll never be forgotten.

Think back to 1989. Do you remember what you were doing? Where you were? That's the year Detroit met its newest TV anchor in Huel Perkins on TV 2. Huel quickly became a friend of the city when he joined Sherri Margolis on the 12 p.m. and 4 p.m. news.

"From the moment we met, we just clicked," Sherri said.

While he became a Detroit favorite quickly, his story started in the south. The native Louisianian was in law school and worked as an anchor in Baton Rouge. It took a phone call from Steve Antoniotti to get him into news permanently. But Antoniotti doesn't remember too much about their first dinner together, except for this funny bit:

"The main thing was I explained what we were trying to do, but he said he didn’t eat chicken, because his grandfather, had choked on a chicken bone or something like that. So when we were ordering, it’s strange, but that's one thing I remember from the dinner other than having a good discussion with him about possibly coming to St. Louis," he said.

As for Huel, he was given an offer he couldn't refuse.

"Literally wrote a figure on a napkin, which was more money than I’ve ever seen in my life, and pushed it my way," Huel said. "And I said, well, I think I may try it."

That landed him the job in St. Louis but Antoniotti soon left for Detroit.

"I went up there, it worked out, the audience responded to me, and then Steve became the general manager in Detroit. He knew when my contract was up, and he said ‘Huel, it’s time to move again,'" Huel said. 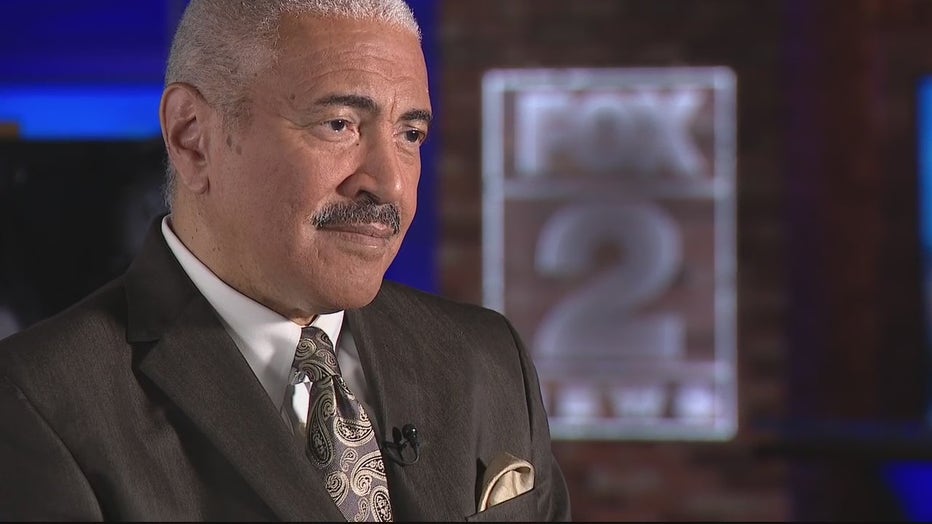 Once in the Motor City, he never made the stories about him. He made it a point to turn that bright spotlight away from him and onto the world he saw. From Nelson Mandela to Rosa Parks, Perkins has interviewed countless high-profile leaders from across the globe. But it's his connection to everyday Detroiters that cemented his legacy in our city.

"He would just go in and not try to do what others would do.  He just tried to do Huel," former FOX 2 Anchor Murray Feldman said.

Huel's wife, Priscilla Perkins, says humility and authenticity are two qualities that people can actually feel when they watch him.

"In terms of what space there is between who you see on TV and I see at home, there is little. What you see with him, is what you get. And that’s the integrity part of it, I have been with Huel 40 years, almost as long as he’s been a newscaster, and what I’ve always admired about him, and I’ve always told him, even if we weren’t a couple anymore, he would still be the first person I would call if I had a problem, if I wanted to resolve an issue, if I wanted money advice. Because he’s just that kind of guy," Priscilla said.

Eight years after he arrived, he met his co-host in Monica Gayle. It was 1997 and a new chapter of TV was starting in Detroit. It lasted 25 years.

"Monica Gayle and I gelled immediately," Huel said. "Even though we come from different places, I’m from Louisiana, she’s from the state of Washington. She has had network experience, most of my experience has been local news. As soon as we sat together on that desk, a team was born. It was immediate. It was, I will say internal, it was something that was miraculous."

'It's been a great run': reflecting Monica Gayle's 25 years at FOX 2

"It was very easy, it’s always been really easy, and I think there’s something, really special about that, that it wasn’t work," Monica said. "To sit on the set together, we could anticipate each other’s moves, and we’ve always had each other’s backs. It just has been a very easy on our relationship and a beautiful friendship."

The friendship soared, as did the ratings, as viewers made FOX 2 News appointment TV.

Years later, Huel brought the heat with the heaviest hitting topics on Let it Rip. From racial unrest to the onslaught of COVID-19 that brought with it sadness and loss, Huel always says "The best is yet to come."

Perhaps it's that contagious optimism blended with his no-nonsense style that everyone saw when Huel first got here. The people of Detroit embraced him even when the newspapers didn't.

Mort Meisner was Huel's boss in St. Louis and Detroit and remembers a phone call from a TV critic.

"(The critic said) ‘Do you know that long tall drink of water you brought in from St. Louis?’ I said Huel Perkins? He said ‘Yeah, he may be a nice guy, but I’m gonna write, in my lead item in the Free Press, my next column is going to be, Huel Perkins isn’t going to last 18 months in Detroit,’" Meisner recalled. "So I think back and he was right. Huel Perkins didn’t last 18 months, darn it, he lasted 31 years, never has anyone been more wrong."

As Huel signs off from the desk, what's next?

And he means it, mostly.

"I want to make sure that more people than ever before, earn money. I think money is far more important than people admit or realize, and I want to be sure that everybody has access to increasing their earning potential in life, I don’t know what that is," he said.

He looks forward to the future filled with filling other people's days with light and something else.

But what will certainly be music to Huel's ears will not be praise, a reminder of his awards, or the ratings he racked up. Instead, it will be a nod to the love Detroit has given him.

"Besides the great ties, pocket squares, and the tailored suits? I think it’s because he brings a certain sincerity, and skillset and knowledge, he is the ultimate preparer. Whether he's going to interview a grandmother who turned 100 or a diplomat or governor, the same amount of preparation. I’ve seen my husband work," Priscilla said.

Through TV, we've all seen the end result of his hard work. That includes his proud mother, Mrs. Thelma Perkins.

"It was very wonderful, I really did enjoy seeing him on TV, and doing a tremendous job. Because I know how television is, if you’re not doing good job, you don’t stay there," she said.

Through his time here, we've heard many stories about how Huel has helped their families or helped them personally. That's what Detroit will remember about Huel Perkins.

"I don’t know what to say, I do it out of a sense of gratitude, the gifts that I have been given are so tremendous, I must share them with the world, when I can, and that's what I try to do," Huel said.

For the past three decades, he's done exactly that. And the city is better because of those gifts - and because of Huel Perkins.