"What (are) you talking about man?"

Some clothing donation bins for charity only give to themselves

Rob Wolchek investigates a clothing donation company that according to stickers on their bins, gives to charity. One problem. They don't.

Rob Wolchek is talking about Khaled's company, a business that collects clothes that generous people donate at bins around metro Detroit.

Khaled: "Please man. The news every time is bad. Looking for something bad."

Wolchek: "I think you're doing something bad."

Some of the donation boxes say the clothes are going to help a non-profit group that helps lost children.

"It's actually fraud because the public thinks the money is helping our charity and not one penny is going to our charity," said Mark Miller, the president of American Association for Lost Children.

But Wolchek caught them emptying bin after bin for days.

Wolchek: "I think you are taking clothes from people who think they're donating to charity and instead the clothes are being donated to you  ..."

Wolchek: "They're going to you."

And this is not the first time Khaled and his wife Mysa's company has been accused of being charity cheats. 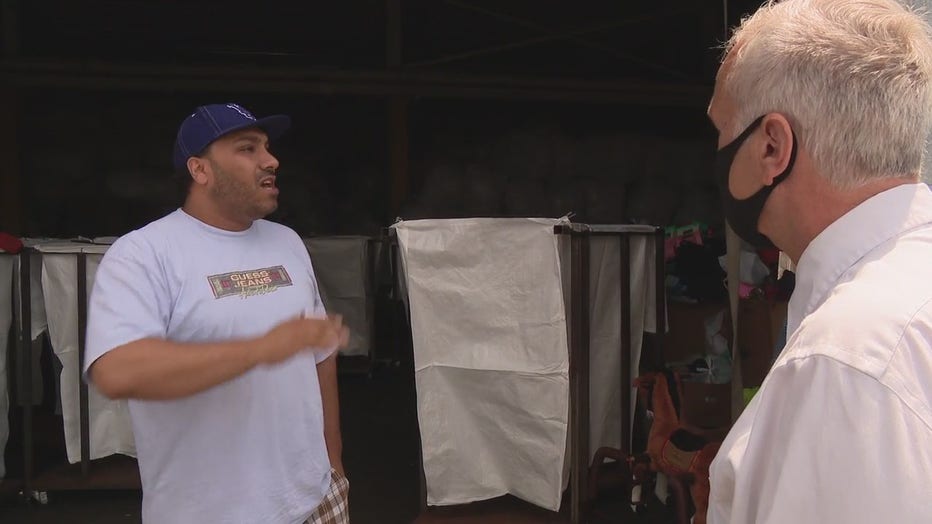 Wolchek: "Didn't you getting in trouble with the attorney general kind of teach you a lesson?"

Mark Miller has run a small charity from his Pennsylvania office for 30 years, the American Association for Lost Children.

"We're a one of a kind charity," he said. "We find and rescue lost children at no cost to the parents. It operates strictly on donations."

In 2017, Mark signed a contract with a Michigan company called Golden Recyclers. He says Mysa Eskander, the director and co-owner of Golden Recyclers, contacted his organization offering to help him raise money by putting up clothing collection bins using their charity's name.

But once the bins went out, the complaints rolled in. Mark said he started getting calls almost daily from mad management companies saying the bins were put up in their shopping centers were without authorization. Mark stared calling Golden Recyclers every week.

"(I said) 'Please don't place your bins without getting permission, because we keep getting calls and it's a bad reflection on the charity,'" Miller said.

But the complaints kept coming. It was a nightmare for a measly $500 a month. When the contract expired on February 1, 2019, Miller's decision was a no brainer.

"(I said) 'We're not renewing this agreement with you. We're done. It's just too much of a hassle,'" Miller said.

"She won't answer my text messages or my calls right now," Christina said. "She hasn't for a long time now." 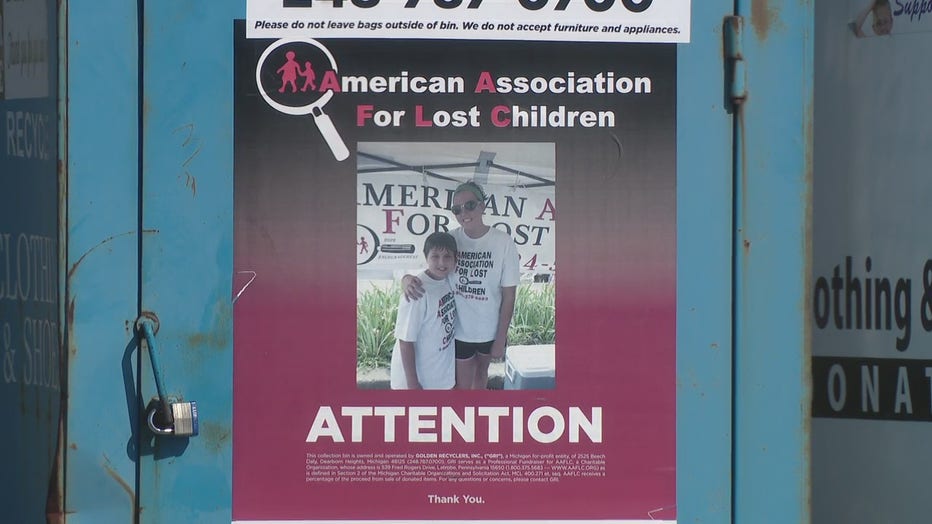 But Wolchek answered her call, and agreed to check out these bins. And oh yes, they are still up and people are still donating clothes to them. Clothes the charity now, is not making a penny on.

We found the bins all over, from Livingston County to Wayne County to Oakland County.

The trucks that pick up  the clothes leave the Golden Recyclers warehouse every morning and we watched as day after day they went from box to box and emptied the donations into the back of their trucks.

Some of the trucks and vans even had the American Association for Lost Children logos on them.

Like one we saw, whose driver didn't let a flat tire keep him from his desire to get those clothes and get them back to the warehouse.

"It's a bad reflection on us the whole way around," Miller said.

There the trucks unload bags into the warehouse where they are packaged up and according to Khaled's website, "We export goods to a diverse customer base throughout the world. Africa, Asia, North America and South America."

In other words, they sell the clothes. How much do they make? A few years ago, they earned gross receipts of $223,000 over a six-month period.

Then-AG Bill Schuette says Golden Recyclers had a contract with a charity, and distributed bins with that charity's name on them. But they also distributed a completely different group of clothing bins, with the name "Mercy" on them, even though that name was not associated with that charity.

The attorney general's office fined Golden $35,000 and did not renew their fundraising license with the state.

Wolchek sent an undercover camera operator outside the Golden Recyclers warehouse to find out whom they are collecting the clothes for.

"We represent American Association of Lost Children," says a worker unloading a box.

And when Wolchek calls the number on the boxes in fine print for Golden Recycling, he got this message: "Hello. You have reached Golden Recyclers and American Association for Lost Children." 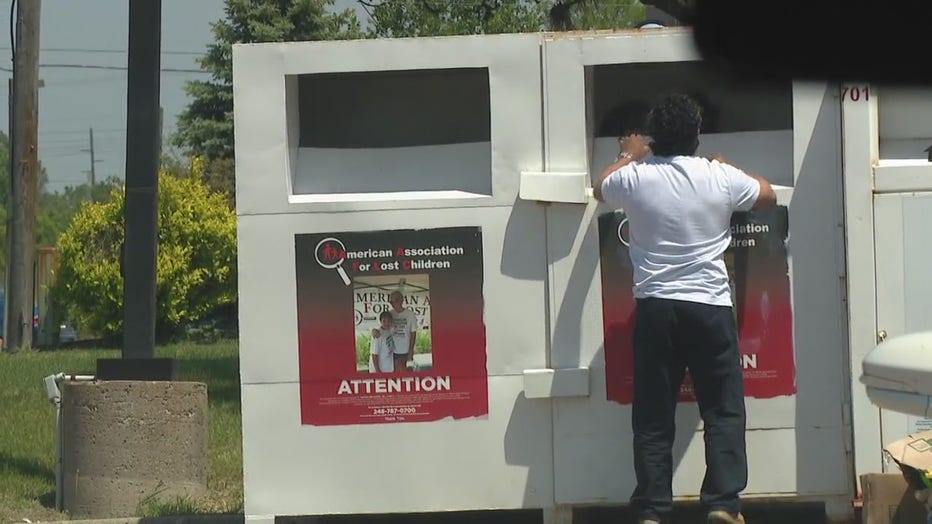 Time for Wolchek to bust the bin boss.

Wolchek: "I'm trying to find out what charities you guys represent here?"

Wolchek: "You don't represent any charities?"

Khaled admits his contract with American Association for Lost Children expired in February of 2019, but that he's got stickers to cover the name on the collection boxes.

Wolchek: "I've been following some of your drivers around. They empty the bins. They don't make any effort to peel the stickers or place another sticker on there."

Wolchek: "You don't think that is ripping off a charity?"

Khaled: "No. I can bring out the sticker right now."

Khaled comes back with a sticker Rob has never seen on any box that says he's a for profit company now, with a new name "Green Recycling of Michigan."

Wolchek: "Okay. Let me try calling this number. Who's going to answer it?"

Wolchek "Now I can't see it. I want to call the number."

Khaled walks away saying "You have the number."

Khaled goes in and out of the office several times. A worker told me Maysa was in there but we never see her.

Wolchek: "You already got in trouble with the attorney general's office once, right, Golden Recyclers, that's you, and Mysa."

Khaled: "It's none of your business where Mysa is. She's not here."

Wolchek: "Well Maysa has talked to the charity. She's gotten a bunch of calls and texts from the charity asking you to take their name off your bins."

But Rob is not going to stop, until he stops using the AAFLC logo on his bins.

Wolchek: "You're profiting off it right?"

Wolchek: "So aren't you kind of stealing money from charity then?"

Khaled: "No no no. I told you we stop work with them. We put the new stickers on the boxes. It takes some time."

Wolchek: "It doesn't take a year and a half to take all the stickers off."

Khaled: "We have a lot of boxes, we change it. You cannot make it in the winter. In the wintertime, you cannot put the sticker (on) you know.  And right now we have four or five months with the corona, with the coronavirus, everything is shut down."

Wolchek: "Khaled, you're lying to me. It's the summertime now. It's July, you can put the stickers on."

Khaled: "How you want to sell it when all the country is closed because of the corona.  What are you talking about man?"

Khaled: "When you talk with me be real. Be real."

Wolchek: "I'm being real; you should be going out today taking those bins down."

Wolchek: "It is real. It's summer right now. You could be sticking the stickers on right now."

Khaled: "If you go out on the street you see a lot of boxes without, without lost children."

Wolchek: "Okay you tell me where?"

Khaled does not tell me.

But get this, Rob looks up Khaled's company's new name on the stickers he promises he's putting up over AAFLC stickers and finds the website for his newly named for profit only company - and there's Khaled's photos.

And there is the American Association for Lost Children charity name - and photos. It also claims they are collecting clothes for the charity. And it says they are sending checks to them.

Khaled: "I don't need to be on the news please."

Wolchek: "Well you're going to go on the news."

"Khaled, only a chump would cheat a charity.  You're in the Hhhhhall of Shame!

Mysa Eskander did call, and says that Golden Recycling is working on removing the American Association for Lost Children name of the charity from all the bins.

But, she says, it has taken a year and a half because they do not know where all the bins are. And when asked about using the charity name when they don't have permission, Maysa said, "We never intended to mislead, it was just an oversight."

The charity got another complaint just last week that one of the bins was put in a parking lot in Southfield without permission. 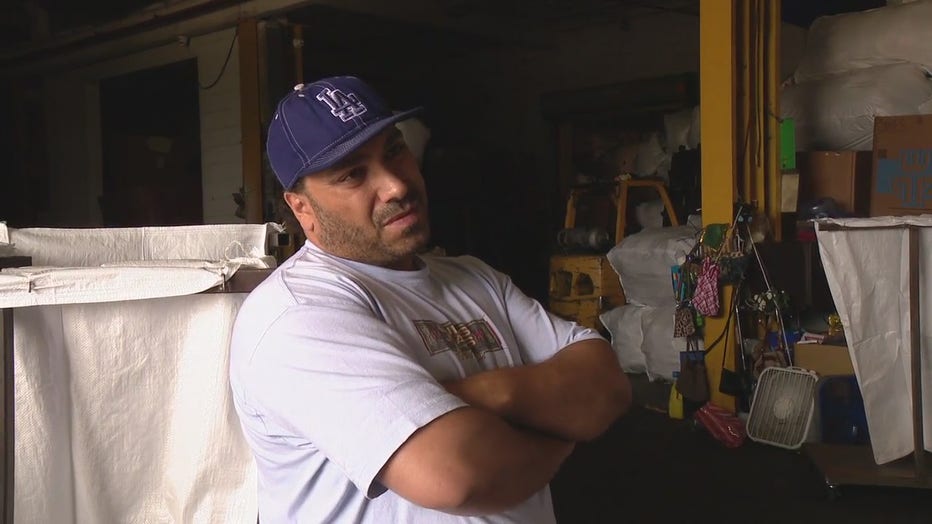