HIGHLAND, Mich. (FOX 2) - A 9-year-old Highland girl is saving pigs unwanted by owners who were promised they would stay small with her very own organization.

"I have just fallen in love with animals but one of the most I love is pigs - pigs are kind of like my passion," said Alaina Holdread.

Third grader runs Pink for Pigs to save unwanted pigs

A nine-year-old Highland girl is saving pigs unwanted by owners who were promised they would stay small with her very own organization.

So much so that the 9-year-old of Highland is doing whatever she can to rescue, support and save. A few years ago, Alaina and her parents learned the truth about fraudulent pig breeders looking to make a buck when they bought Daisy.

"We started learning about all of the lies that are told to people - that they are going to stay teacup size, that they make good apartment pets and whatnot. We would actually scour Facebook and find ads on CraigsList where people were getting rid of a potbelly pig and hunters would pick them up and use them as bait training for their dogs or people would pick them up and use them for slaughter," said Alaina's mother.

So Alaina started Pink for Pigs.

"It's an organization that I created to try and save pigs lives," she said.

With her own Facebook page, they hold fundraisers and auctions selling jewelry, merchandise and even a pig calendar filled with pictures of swine they rescued to raise money for other pig rescues like Smiggy's Safe Haven and Sanctuary in Cass County.

Christy Guipe with the resue says they currently have 52 pigs and get requests each week to take in more. She says the issue is that breeders sell pigs that people think will remain small but they get too large and owners can't care for them.

"Rescues right now - we're busting at the seams. Everybody's looking for donations and funds," she said.

That's where Alaina comes in. So far this precocious pig loving child has raised $5,000  to help provide food, straw and vet care for the rescues. Through her organization, Alaina is also working to educate people about fake breeders and eventually shut them down. Not bad for a third grader. 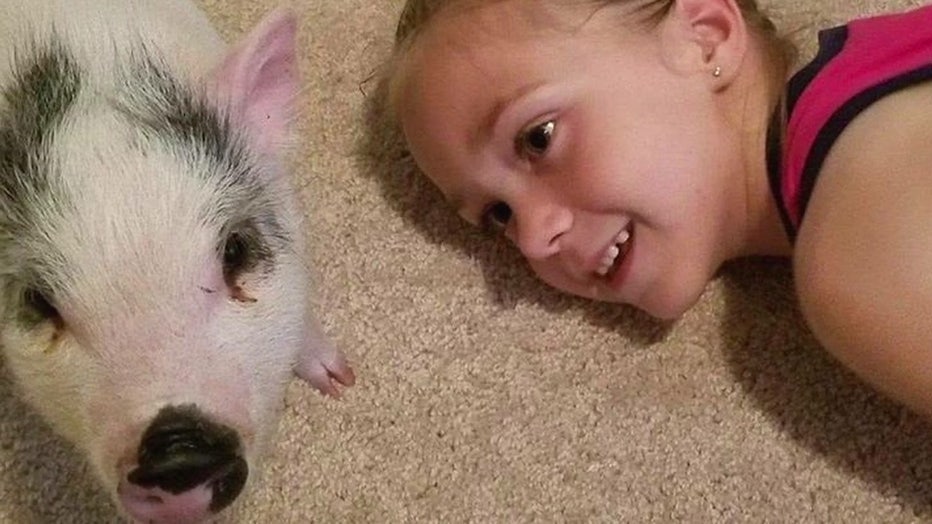 "She's my inspiration," her mom said.

Thanks to organizations like Pink for Pigs, many pigs are finding good homes and are able to help others. Just ask the expert.

"They do really good with people and kids with ADHD and other disabilities and they are really smart also. Some people think pics are dirty but they roll in because it's like their sunscreen and it helps them keep cool," Alaina said.

Click here to learn more about Pink for Pigs.