Fire officials tell FOX 2 the maximum capacity of the venue is 5,800. They say once they hit that number, everyone else will be watching the rally outside on jumbotrons.

Mike Boatman and his friends call themselves the Front Row Joes.

Boatman and his friends travel from state to state camping out, often in their cars —  so they can be in the front row at Trump rallies. Saturday night will be Trump's latest stop on his Save America tour.

Amy Lee and her husband traveled all the way from California for the event as part of the Front Row Joes.

FOX 2: "How many trump rallies have you been to?"

Thousands are expected to show up to the Michigan Stars Sports Center on Powell Road.

Fire officials tell FOX 2 the maximum capacity of the venue is 5,800. They say once they hit that number, everyone else will be watching the rally outside on jumbotrons.

Cheryl and Cindy — sisters from Ohio — hope they’ll be inside. And while they’re excited to see Donald Trump, they’re also hoping to see someone else.

"Negative 48," Cheryl said. "Michael Protzman. He’s a truther, he talks about what’s going on in the world."

And it wouldn’t be a Trump rally without the infamous Trump Unity Bridge. Originally from Michigan — it has made stops in every state except Hawaii and Alaska.

And if only the bridge could talk— the stories it would tell.

"Times Square someone getting on the float and singing the National Anthem, that was beautiful," said owner Rob Cortis. "In Tulsa, Oklahoma, we were getting the luggage out of the back and someone jumped in the truck, stole it and sped off. A high-speed chase, $30,000 in damage."

County and township officials say they are prepared for anything. Their goal, above all else, is to have a safe event. 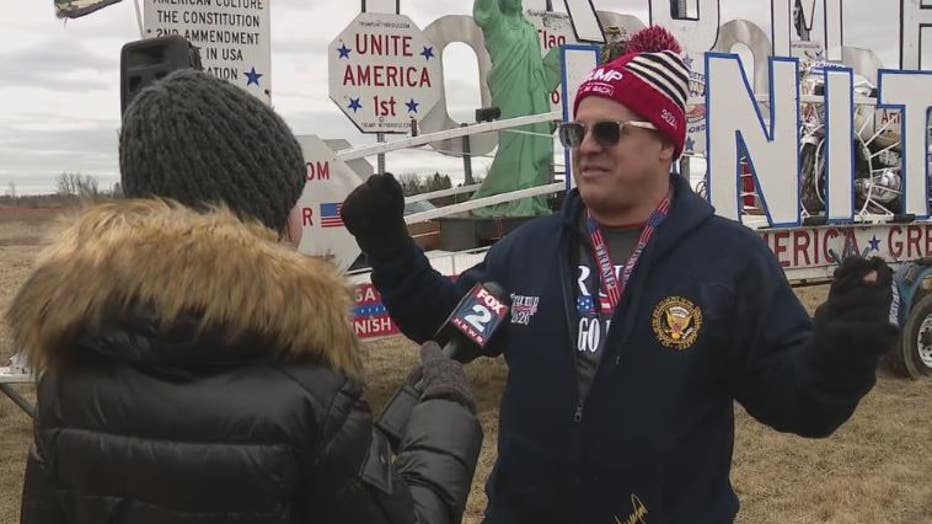