They parked in the Big Blue Deck at the Evans Terminal in Romulus and found their brand new Jeep Wagoneer missing its wheels and tires, sitting on cement blocks.

ROMULUS, Mich. (FOX 2) - A family says they came home from a trip to find all four wheels stolen off of their SUV in the Detroit Metropolitan Airport's main parking garage.

The family says they parked in the Big Blue Deck at the Evans Terminal in Romulus and found their brand-new Jeep Wagoneer missing its wheels and tires, sitting on cement blocks.

Late last month Hebeka and his daughter were returning home to Michigan from Florida. They left on a Wednesday and returned on a Monday -  and made the discovery.

"To see your car on blocks in a parking garage with vehicles everywhere on the second floor is a huge concern," said Joe Hebeka. "My daughter and I landed around 1 p.m. in the afternoon, hopped off the elevator, opened up the doors after I remote started my car. (We) walked around the corner and noticed it was just sitting on blocks in the middle of the garage with cars parked around it everywhere."

Fast-forward to now and it’s been over a week since his truck was vandalized in one of the lots owned and operated by SP Plus Parking, managed by Metro Airport.

"It actually took me a couple of seconds to even understand that that was actually our truck," he said. "I mean I thought was it possible that it’s not ours, that I randomly started somebody else’s truck?"

He says so far, the detectives have no leads. As for additional damage done? Hebeka says that’s still unclear.

"I had not known what had even been done to the vehicle," he said. "I had never seen anything like that before. My daughter started to panic and I wanted to get her to school, so we left the vehicle and we took an Uber to get home real quick."

Hebeka says he later returned and filed a report with airport police.

Between the wheels and the tires, Joe says the dealership estimates anywhere between $7,000 to $9,000 worth of materials were stolen.

Hebeka says he wonders if there was any security footage or surveillance video.

"It doesn’t seem to me that there’s any other footage for them to look through because there’s really no cameras inside the garage - only at the point of payment where you get your ticket to park," he said.

The Hebeka family says they notices little to no cameras short of the check-out line, which is why they’re sharing their story

"We’re fortunate enough this stuff is going to get replaced," he said. "I’m sure you know insurance is going to take care of things. I just wouldn’t want to see this happen to anyone else that is less fortunate or a person getting hurt."

FOX 2 reached out to Metro Airport for comment and learned the incident is still under investigation.

"We’re exploring increasing camera coverage and adding additional technology at the Big Blue Deck and the McNamara Terminal Parking Deck. Furthermore, our police department is working in cooperation with several law enforcement agencies to address stolen vehicles not only at DTW, but across southeast Michigan."

"When you look at that parking garage when you first pull up, their sign is pretty much telling you that you’re completely on your own here, you’re completely at risk," Joe said. "It doesn’t say you’re unsafe but it does say that your belongings are at risk." 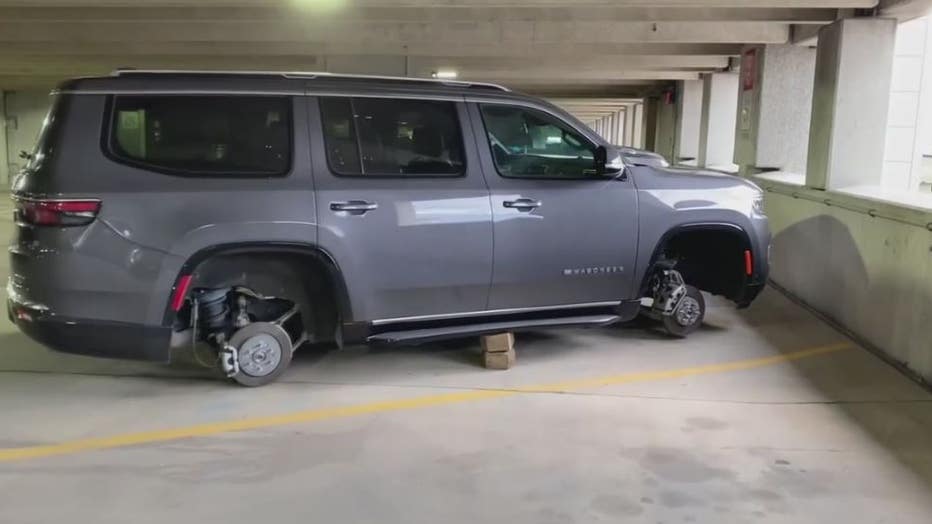