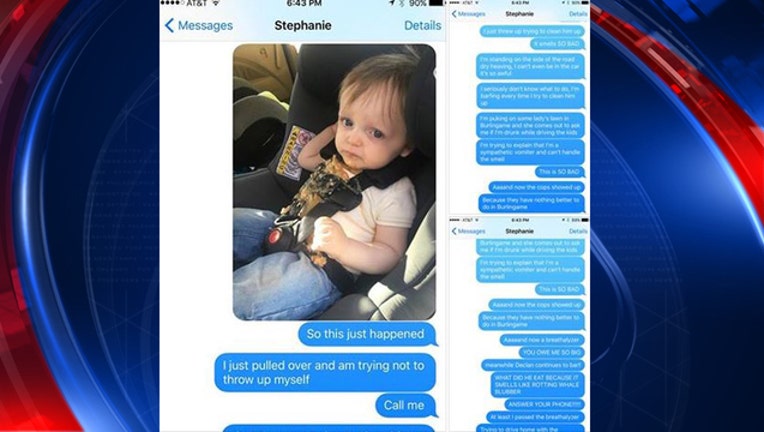 Moms and dads everywhere have their stories of young children getting incredibly sick - and it's up to you to clean it up. But one father's hilarious and unfortunate story is everywhere - because he posted it.

Ben Patterson was driving with his young son when the young boy vomited in their car. That was unfortunately just the beginning. His story involves him throwing up in a woman's yard, the cops being called, and the boy throwing up again.

Ben was watching the kids so his wife could get a night out with friends. They swapped cars and their son, Declan, lost it on the way home. Ben sent his wife a picture of the mess and a few follow up text messages:

So this just happened

I just threw up trying to clean him up

It smells SO BAD

So, with his wife not calling him back, Ben went to work cleaning the boy up. Then he lost it, himself.

He said he would throw up every time he tried to clean up the vomit. He got sick in a lady's yard, she asked if he was drunk with kids in the car - so she called the cops.

I seriously don’t know what to do, I’m barfing every time I try to clean him up

This is so bad

Aaaaand now the cops showed up

YOU OWE ME SO BIG

Patterson - not being drunk - passed that Breathalyzer. He and his still-vomiting son went home while Ben demanded to know what his wife had fed Declan:

WHAT DID HE EAT BECAUSE IT SMELLS LIKE ROTTING WHALE BLUBBER

At least I passed the breathalyzer

For what it's worth, Ben recognizes the hilarity in his own misfortune and was brave enough to post the entire thing on Facebook. It's been shared over 130,000 times since Friday: