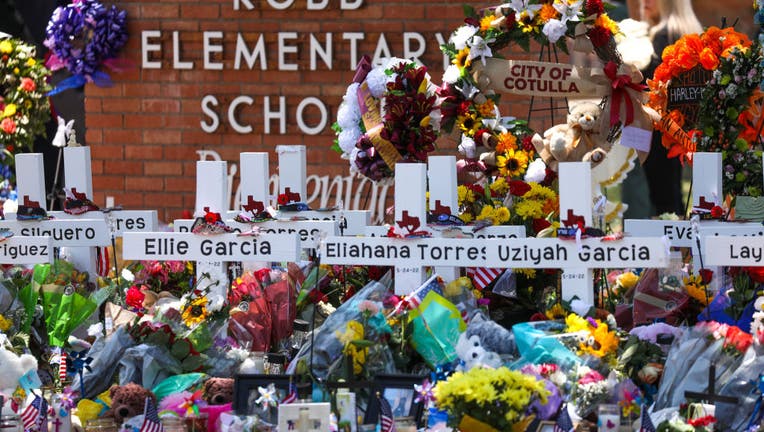 TEXAS - UVALDE - MAY 28: People visit a memorial for the victims of the mass shooting at Robb Elementary School on May 28, 2022 in Uvalde, Texas, United States. (Photo by Yasin Ozturk/Anadolu Agency via Getty Images)

In the statement, Harrell said,

"From the beginning of this horrible event, I shared that the district would wait until the investigation was complete before making personnel decisions. Today, I am still without details of the investigations being conducted by various agencies.

Because of the lack of clarity that remains and the unknown timing of when I will receive the results of the investigations, I have made the decision to place Chief Arredondo on administrative leave effective on this date.

Lieutenant Mike Hernandez will assume the duties of the UCISD Chief of Police. We will continue to seek qualified candidates to join our police department as we prepare for the new school year.

There will be no further information released regarding this personnel matter."

The decision was made as hearings are underway in Austin this week to discuss the deadly massacre that left 19 children and two teachers dead.

On Tuesday, the head of the Texas state police pronounced the law enforcement response to the Uvalde school shooting an "abject failure," telling lawmakers that there were enough officers and firepower on the scene to have stopped the gunman three minutes after he entered the building.

The Texas Department of Public Safety has released a timeline of events around the Robb Elementary School shooting in Uvalde.

The timeline showed it took 74 minutes from when police went into the school to the time they confronted and killed the gunman.

As the hearings continue, legislators are one step closer to passing a bipartisan gun violence bill, a lead negotiator for Democrats said on Tuesday.

The legislation lawmakers have been working toward would toughen background checks for the youngest firearms buyers, require more sellers to conduct background checks and beef up penalties on gun traffickers. It also would disburse money to states and communities aimed at improving school safety and mental health initiatives.

Sen. John Cornyn, R-Texas, the chief Republican bargainer, spoke on the Senate floor moments later and said he, Murphy, and the other two top Senate bargainers had "reached agreement."

The senators did not initially say how they’d resolved the two major stumbling blocks that had delayed agreement on the plan’s legislative language.

The hearings and the investigation into the shooting are ongoing.