A vigil was held Wednesday night for those killed at Robb Elementary in Uvalde.

DALLAS - Only days before the end of school, a mass shooting has devastated the community of Uvalde in south Texas. A total of 21 people were killed including 19 children and two teachers.

The Texas Department of Public Safety said 18-year-old Salvador Ramos first shot his grandmother, who remains hospitalized in serious condition. He later crashed his truck outside Robb Elementary School in Uvalde before entering the school in body armor and opening fire with a rifle.

Investigators have not revealed a motive but said the gunman barricaded himself in a classroom, shooting anyone in his way. He died in a shootout with police.

Police have not formally identified the victims from the mass shooting, but some family members are sharing names and pictures. 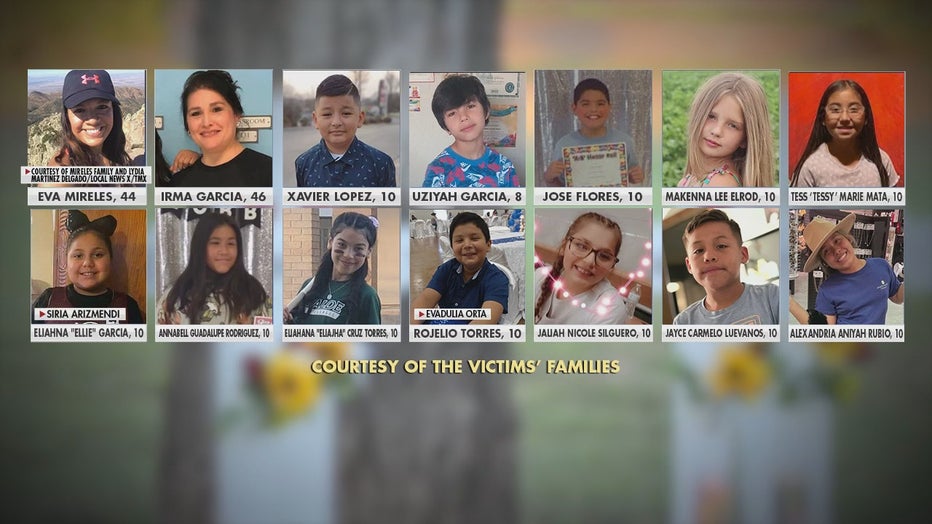 Authorities said 17 people are also still being treated for injuries related to the shooting. 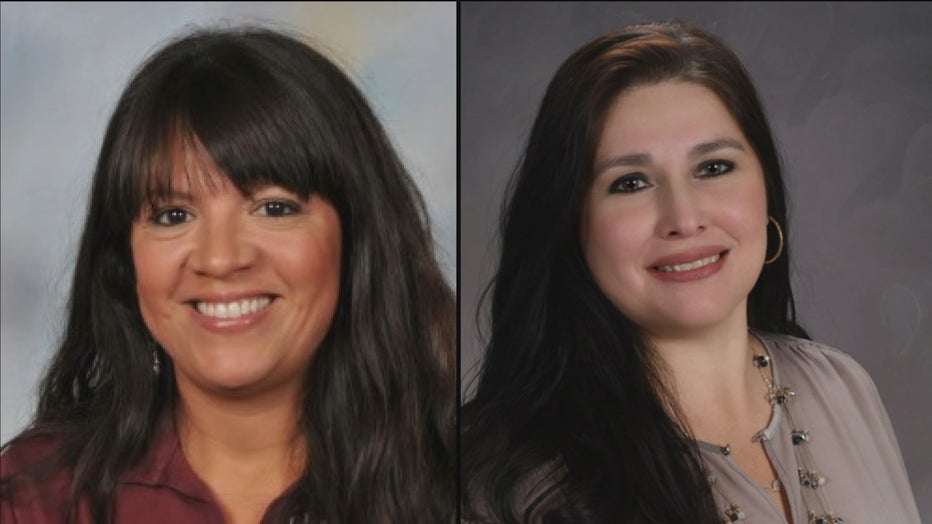 Mireles was an educator for 17 years. She is being remembered as a loving mother and wife.

"She was adventurous. I would definitely say those wonderful things about her. She is definitely going to be very missed," said 34-year-old relative Amber Ybarra, of San Antonio.

Garcia taught for 23 years. On her bio on the school's website states she was the mother of four children, loved to listen to music and loved to BBQ with her husband of 24 years.

Nevaeh Bravo's death was confirmed by her cousin's social media, according to local reports.

"Unfortunately my beautiful Nevaeh was one of the many victims from today’s tragedy… Rest in peace my sweet girl, you didn’t deserve this," the post read.

Javier Cazares said he found out Tuesday afternoon that his 9-year-old daughter Jacklyn Cazares was killed in her classroom. She was with a group of five girls, including her second cousin, Annabelle Rodriguez, who formed a tight group of friends.

"They are all gone now," Cazares said.

The extended families of the slain cousins gathered Wednesday to mourn and comfort each other over barbecue.

How to talk to your children about the Texas school shooting

Thursday was supposed to be the last day of school and the start of the summer for students at Robb Elementary School in Uvalde, Texas -- the site of the deadliest school shooting in Texas. Good Day FOX 4 got advice on talking to kids about that horrendous crime, what to say and how to ease their fears.

Makenna Elrod, a 10-year-old student, died in the shooting, according to her family on social media.

A post from Elrod's sister on Twitter read, "My baby sister has finally been found in a classroom… thank you for everyone sending their love to my family and I. All I ask is that you hug your loved ones tonight and tell them you love them, you never know when you won't have the chance to anymore."

She said Elrod had a big heart and loved her family and friends, according to a GoFundMe page raising money to pay for funeral expenses.

"Her smile would light up a room. We will carry her in our hearts and we know she is with our Lord and Savior," McCullough wrote.

Jose Flores Jr., a 10-year-old student, died in the attack, according to his uncle.

Christopher Salazar described his nephew to the Washington Post as a "very happy little boy" who loved his parents and loved to laugh.

He told the outlet that Flores Jr has just been rewarded for making the honor roll.

"He was very smart," Salazar said. "He wasn’t a kid who would look for trouble."

Angel Garza, a medical assistant with a step daughter at the school, arrived soon after the shooting and found himself aiding students streaming out injured and shaken up.

One girl was covered in blood and he asked if she had been shot.

"I’m not hurt. He shot my best friend," the girl said. "She’s not breathing. She was just trying to call the cops."

And then she named the friend, Amerie Jo Garza, his stepdaughter.

Amerie was happy child who had just gotten her first cell phone for turning 10 and had just gotten a certificate the morning of the shooting for making the honor roll. She also loved to paint and draw and work in clay.

Garza said that in his grief he wonders what happened in those brief moments before Amerie was killed, if she said anything to the shooter, if he had seen her reach for her phone. And then he remembered the moment she got the phone for her birthday, and her face.

"It just lit up with the happiest expression," said Garza. "She was so sweet."

Relatives of 10-year-old Eliahna Garcia recalled her love of family.

"She was very happy and very outgoing," said Eliahna’s aunt, Siria Arizmendi, a fifth-grade teacher at Flores Elementary School in the same district. "She loved to dance and play sports. She was big into family, enjoyed being with the family."

Manny Renfro said he got word Tuesday that his grandson, 8-year-old Uziyah Garcia, was among those killed.

"The sweetest little boy that I’ve ever known," Renfro said. "I’m not just saying that because he was my grandkid."

"We started throwing the football together and I was teaching him pass patterns. Such a fast little boy and he could catch a ball so good," Renfro said. "There were certain plays that I would call that he would remember and he would do it exactly like we practiced." 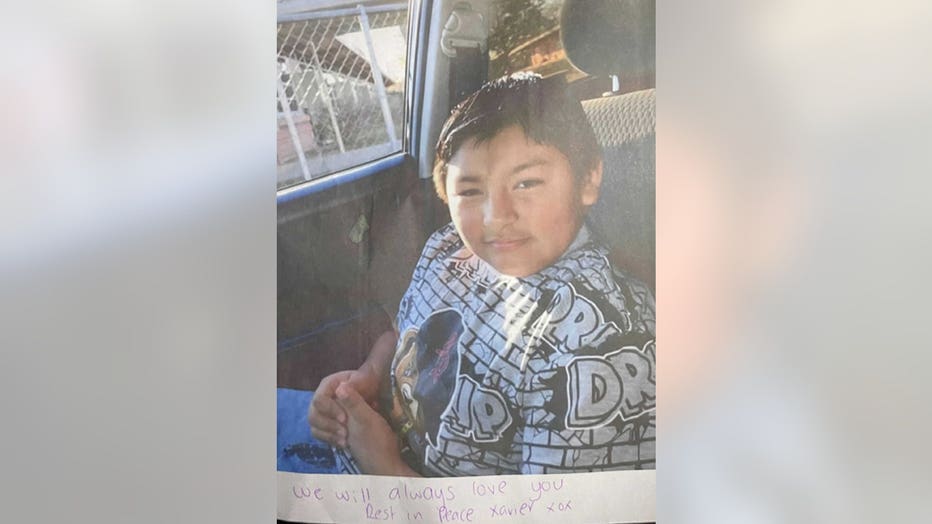 Family members identified 10-year-old Xavier Lopez as one of the victims in the Uvalde, Texas school shooting. (Courtesy of the family)

Lisa Garza mourned the death of her 10-year-old cousin, Xavier Javier Lopez, who had been eagerly awaiting a summer of swimming.

"He was just a loving ... little boy, just enjoying life, not knowing that this tragedy was going to happen," she said. "He was very bubbly, loved to dance with his brothers, his mom. This has just taken a toll on all of us."

She lamented what she described as lax gun laws.

"We should have more restrictions, especially if these kids are not in their right state of mind and all they want to do is just hurt people, especially innocent children going to the schools," Garza said.

Jayce Carmelo Luevanos reportedly did not want to go to school Tuesday.

According to FOX News, Tess Mata, who went by Tessy, was a fourth-grader who loved TikTok dance videos, Ariana Grande and the Houston Astros, the Washington Post reported.

Loved ones initially thought the lockdown at the elementary school was because of people possibly trying to flee police after crossing the southern border, her sister told the newspaper.

"Sissy I miss you so much," Mata's sister, Faith wrote on Facebook. Alithia Ramirez.

Alithea was one of the 19 fourth-grade students killed, her father, Ryan Ramirez, told KSAT-TV.

Her father said she loved to draw and aspired to be an artist, having set out to fulfill her dream when she recently sent in a drawing for a Google Doodle contest. 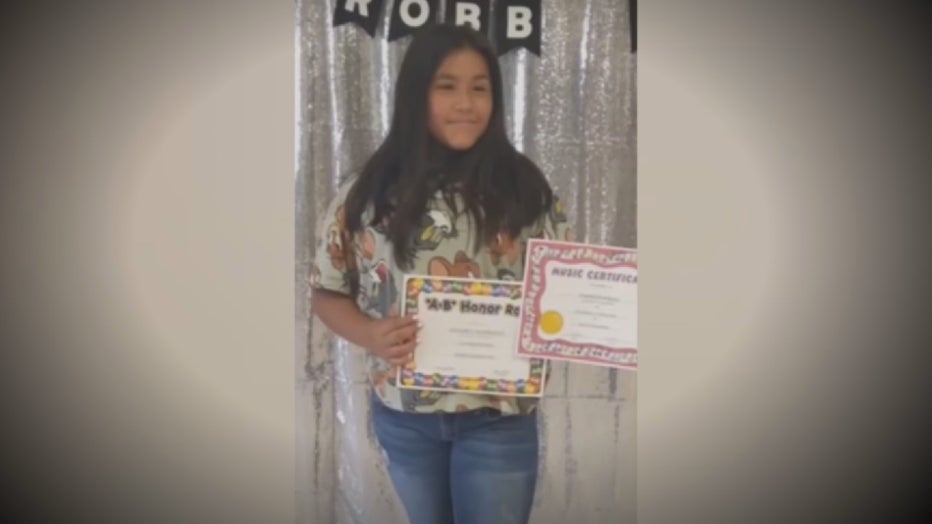 Hours after the attack, many families were still waiting for answers.

"I was working, and I got info that my daughter was at the school where they were shooting, and I waited for more details. Now I’ve come back looking for my daughter and I can’t find her now," said Jesse Rodriguez.

Rodriguez later found out his daughter was among those killed. He shared photos of 10-year-old Annabelle Guadalupe Rodriguez and said her cousin in the same third grade class also died.

Lexi Rubio’s parents were there to see her receive a Good Citizen Award and a certificate for being part of the All-A Honor Roll at Robb Elementary Tuesday morning.

During a news conference, Texas Gov. Greg Abbott confirmed she was the 10-year-old daughter of Felix Rubio, one of the Uvalde County sheriff’s deputies who responded to the shooting just 30 minutes later.

Vincent Salazar said his 10-year-old daughter, Layla, loved to swim and dance to Tik Tok videos. She was fast — she won six races at the school’s field day, and Salazar proudly posted a photo of Layla showing off two of her ribbons on Facebook.

Each morning as he drove her to school in his pickup, Salazar would play "Sweet Child O’ Mine," by Guns ‘n’ Roses and they’d sing along, he said.

Veronica Luevanos, whose 10-year-old daughter, Jailah Nicole Silguero, was among the victims, tearfully told Univision that her daughter did not want to go to school Tuesday and seemed to sense something bad was going to happen. Jailah’s cousin, Jayce, also died in the shooting. 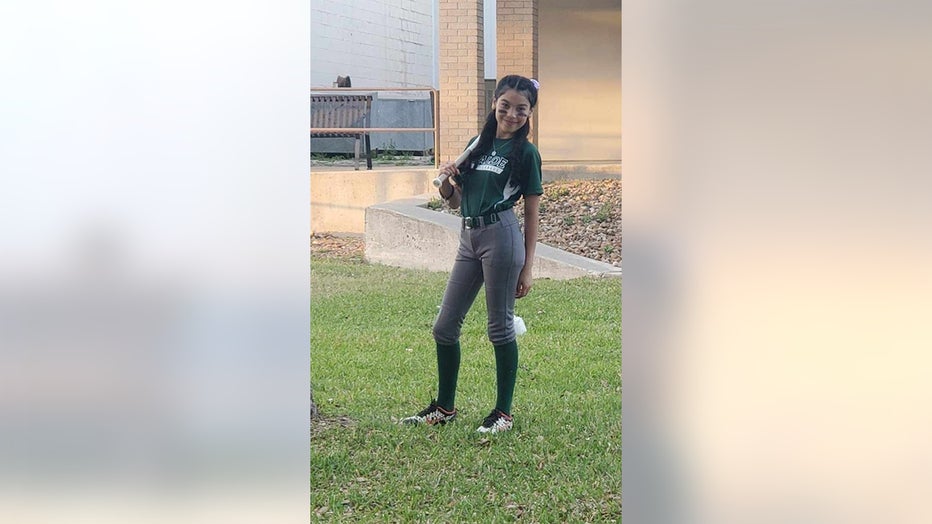 Elijah Cruz Torres, a 10-year-old student at Robb Elementary School, was among the students killed in the school shooting on May 24, 2022. (Courtesy of the family)

Elijah Cruz Torres, 10, was also unaccounted for in the hours following the shooting spree. The 4th-grade student’s grandfather told Fox News on Tuesday the family is worried she is dead.

Rojelio Torres, a 10-year-old student, was killed in the shooting, according to his cousin on social media.

Torres' father was initially desperately searching for him, according to KHOU-TV.

His father told the station that he was at work when he learned about the shooting and immediately rushed to the school to look for his son.

FOX News and the Associated Press contributed to this report.