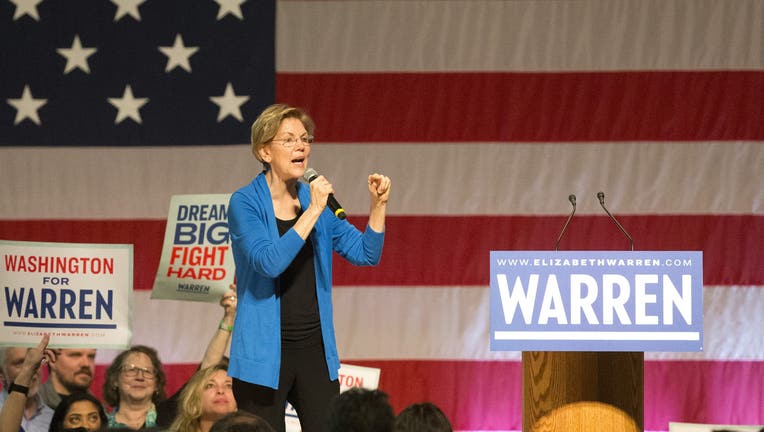 WASHINGTON - The future of Sen. Elizabeth Warren’s presidential campaign was in serious doubt after she was defeated in Tuesday’s Democratic primary in her home state of Massachusetts.

The disappointing finish in the state she represents, and a weak showing in other Super Tuesday states, marked a striking collapse for the onetime darling of progressives who was known for having a plan for nearly everything. After mediocre showings in the first four contests, where she never finished higher than third place, Tuesday’s results could speed her exit from the race for the Democratic nomination, where she was significantly trailing in the delegate count.

Warren appeared set on remaining in the race, at least for now. Speaking to supporters in Detroit ahead of next week’s Michigan primary, she introduced herself as "the woman who's going to beat Donald Trump." She encouraged supporters to tune out the results and vote for the person they believed would be the best president, saying: "Prediction has been a terrible business and the pundits have gotten it wrong over and over.”

“You don’t get what you don’t fight for. I am in this fight,” she added.

Super Tuesday: A state-by-state snapshot of what factored into voters' decisions

The balance of Super Tuesday's battlefield raised questions about whether the Democratic primary contest would stretch all the way to the July convention or be decided much sooner.

The Massachusetts senator's campaign had all the early markers of success — robust poll numbers, impressive fundraising and a national organization -- but she was squeezed out by Vermont Sen. Bernie Sanders, who had an immovable base of support among progressives she needed to win over. Ahead of Tuesday’s vote, Warren’s campaign said it was betting on a contested convention — though with a quickly consolidating field that was no sure bet, and she appeared set to enter that convention trailing significantly at least two candidates in the delegate count.

Her lagging performance threatened to force out from the race its last major female contender. Minnesota Sen. Amy Klobuchar dropped out Monday, joining Pete Buttigieg, the former mayor of South Bend, Indiana, to endorse the surging candidacy of Biden. It marked an unexpected twist in a party that had used the votes and energy of women to retake control of the House, primarily with female candidates, just two years ago.

RELATED: Bloomberg to reassess after disappointing Super Tuesday results, according to AP source

Warren's campaign began with enormous promise that she could carry that momentum into the presidential race. Last summer, she drew tens of thousands of supporters to Manhattan's Washington Square Park, a scene that was repeated in places like Washington state and Minnesota.

Warren, 70, appeared to hit her stride as she hammered the idea that more moderate Democratic candidates, including Biden, weren’t ambitious enough to roll back Trump's policies and were too reliant on political consultants and fickle polling.

But Warren was unable to consolidate the support of the Democratic Party’s most liberal wing against the race’s other top progressive, Sanders. Both support universal, government-sponsored health care, tuition-free public college and aggressive climate change fighting measures while forgoing big fundraisers in favor of small donations fueled by the internet.