NORTH PORT, Fla. - The Carlton Reserve was quiet Wednesday morning compared to past days, but North Port police insisted that although the search for Brian Laundrie has been scaled back in the area, it is still ongoing and remains focused on areas of water.

By the afternoon, crews had searched and cleared the Myakkahatchee Creek Environmental Park.

Meanwhile, the Laundrie family's attorney confirmed reports that the family had shopped for a new cell phone in the days after Brian returned from his trip. It wasn't immediately clear what promoted Steven Bertolino's comment but some observers have speculated the family bought a "burner phone."

"A phone was purchased and Brian left it at home the day he went for a hike in the preserve and the FBI now has that phone," Bertolino told FOX 13's Kimberly Kuizon.

When Gabby Petito’s parents and stepparents came together Tuesday and spoke for the first time since her remains were found in Wyoming, they said they have complete faith that the FBI will solve the case. But they, like many others, still want to know: Where is Brian – the sole person of interest in her death?

The search for Brian has slowed down at Carlton Reserve, the 25,000-acre swamp that had been the focus for an entire week. The Laundries' attorney has since confirmed the family camped at Fort De Soto between Sept. 6-7. That’s after Brian returned from the Grand Teton National Park in Wyoming – where Gabby’s remains were found – on Sept. 1, and before she was reported missing on Sept. 11.

New details in timeline of Brian Laundrie after return to Florida

New details, confirmed by the family’s attorney Tuesday, help flesh out Brian Laundrie’s timeline after his return to Florida but may not necessarily shed any new light on where he is right now.

Brian’s family told North Port detectives they last heard from him on Sept. 14. The attorney said, the suggestion that his parents either know where Brian is or helped him get away is just wrong.

At this point, it’s still unclear how Gaby died. A coroner said her manner of death was homicide, but the exact cause has yet to be determined. Authorities out west are still in possession of her remains as the investigation is ongoing.

North Port city officials are working on a permanent memorial for Gabby.

Just steps away from North Port City Hall and the police department, the community has gathered in the middle of the Center Front Green, where a giant tree sits. It has become a place to remember the 22-year-old.

"The gentleman who donated the tree wanted it to be the celebration. We light it every year for the holidays. Little did we know that it would be a gathering place for a memorial," North Port Mayor Jill Luke explained to FOX 13.

North Port Mayor Jill Luke has watched, as people from across Florida and the country have stopped to visit a growing memorial for Gabby Petito as the search for Brian Laundrie continues.

The memorial for Gabby grows every day. Mayor Luke said people from all across the state and the country have stopped to visit.

"They identify and come," she said. "Some simply didn’t know her, but their heart is broken over the pain they see from the tragedy, but there are others that have come and reflected over their own journey in life and have been receiving healing. I know of one young lady who was just torn at the tree and crying, she went home and told her family about an incident where she was assaulted. She had kept it silent for years."

The city is working on plans for a bench to be placed near the tree as a way to honor Gabby. 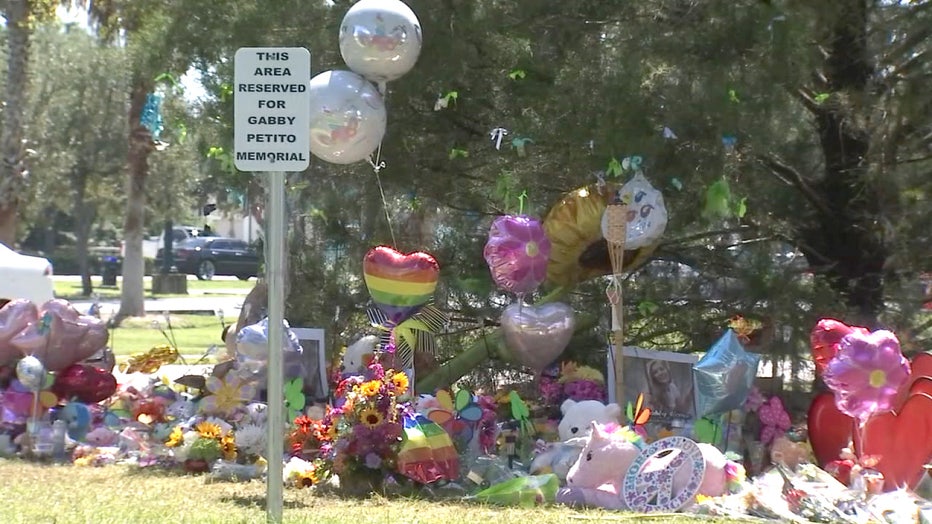 During their Tuesday press conference, Gabby's parents and stepparents revealed their matching tattoos. All got it on their right forearms.

"These were tattoos that Gabby designed herself," Petito’s stepfather Jim Schmidt said. "She was an artist."

The tattoos read "Let It Be" in what appears to be cursive writing.

Gabby Petito’s family gathered Tuesday to thank law enforcement for their efforts to find their missing loved one and showed off matching tattoos in her memory.

The family also implored the public and news media to put the same energy into helping find other missing people as they did with Gabby.

"The Laundries did not help us find Gabby, they sure are not going to help us find Brian," attorney Richard Stafford said. "For Brian, we’re asking you to turn yourself in to the FBI or the nearest law enforcement agency."

Joseph Petito thanked the news media and social media for spotlighting his daughter’s disappearance, but he said all missing persons deserved the same attention.

The search for Brian Laundrie continues

For a week, dozens of officers combed through the swampy Carlton Preserve near the family’s North Port home – the location where the family retrieved Brian’s car. But despite a reward and even the involvement of reality TV star Duane ‘Dog the Bounty Hunter’ Chapman, there’s been no sign of Brian.

Dr. Bryanna Fox, associate professor in the Department of Criminology at the University of South Florida and former FBI special agent, says even though it may seem the pace of the investigation has slowed, behind the scenes, a complex operation is still underway.

"When the FBI or local law enforcement are conducting investigations, keeping their cards close to their chest is integral to making sure the integrity of that investigation is protected," said Dr. Fox. "For every day we were out in the field doing something, we were back in the field writing up subpoenas, preparing affidavits, collecting digital evidence, collecting physical evidence that may have been already been in our custody that we are processing."

This investigation stretches across the country, from Florida to Wyoming. Dr. Fox said it’s vital to let investigators do their jobs.

"We wouldn’t want, after that person is apprehended, for them to not be held responsible because of an issue that was avoidable because people were injecting themselves into the case," she pointed out.

However, she says tips are still a key part of the investigation.

"If you see something you think may be related, please say something. At the same time, we need to make sure we are not injecting ourself into this case or compromising law enforcement’s ability to make sure they’re doing their job as best as possible," Dr. Fox said.

Anyone with information regarding Gabby's disappearance or Brian's whereabouts is asked to call the FBI national hotline at 1-800-225-5324 or submit tips to tips.fbi.gov.