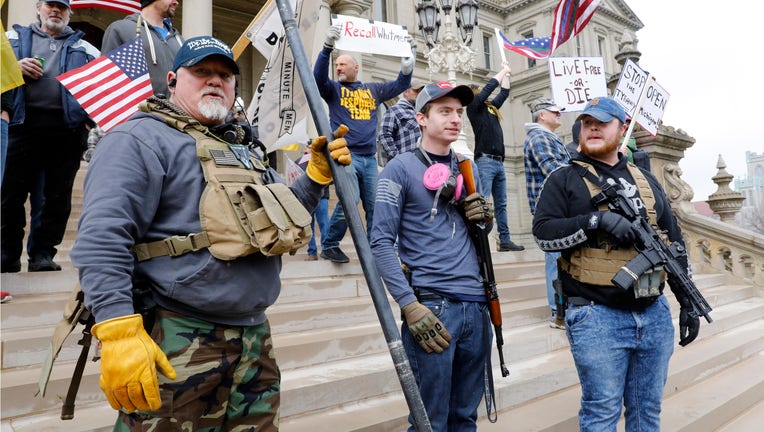 People take part in a protest for "Michiganders Against Excessive Quarantine" at the Michigan State Capitol in Lansing, Michigan on April 15, 2020. - The group is upset with Michigan Governor Gretchen Whitmer's(D-MI) expanded the states stay-at-home

(FOX 2) - President Donald Trump tweeted Friday that Michigan Gov. Gretchen Whitmer should "give a little" and "put out the fire" a day after hundreds of conservative demonstrators, some with assault weapons, protested at the state Capitol against stay-at-home restrictions she imposed to fight the coronavirus pandemic.

The Democratic governor, in a tweet, responded with a video of former First Lady Michelle Obama stating: "Our motto is: `When they go low we go high."'

She then addressed the tweet later Friday afternoon at her press conference. "The spirit of "make a deal" and the spirit of outrage that's happened from legislature about trying to negotiate sectors opening up - we're not in a political crisis where we should just negotiate and find some common ground here; we're in a public health crisis. We're in the midst of a global pandemic," she said. "The fact of the matter is we have to listen not to pollsters and not to people with political agendas, but listen to epidemiologists and public health care experts. Listen to our business leaders who are worried about making sure they've got all the PPE and protocols to keep all their employees safe."

Whitmer late Thursday issued directives both proclaiming that the COVID-19 emergency continues and declaring new states of emergency and disaster after the Republican-controlled Legislature refused her request for a 28-day extension. The declarations are the foundation of her stay-home order and other measures to curb the spread of the virus.

GOP lawmakers, who want more input on gradually restarting the economy, also voted to authorize a lawsuit challenging her authority and actions. Whitmer in the past week let some businesses reopen and announced that commercial and residential construction can resume next week.

"Even though we might disagree on some things I think we're unanimous in that we want to reengage this economy safely so we never have to be in the stay-home stay-safe order ever again. And so I'm going to stay focused on the facts and the data and doing the next right thing," Whitmer said Friday. 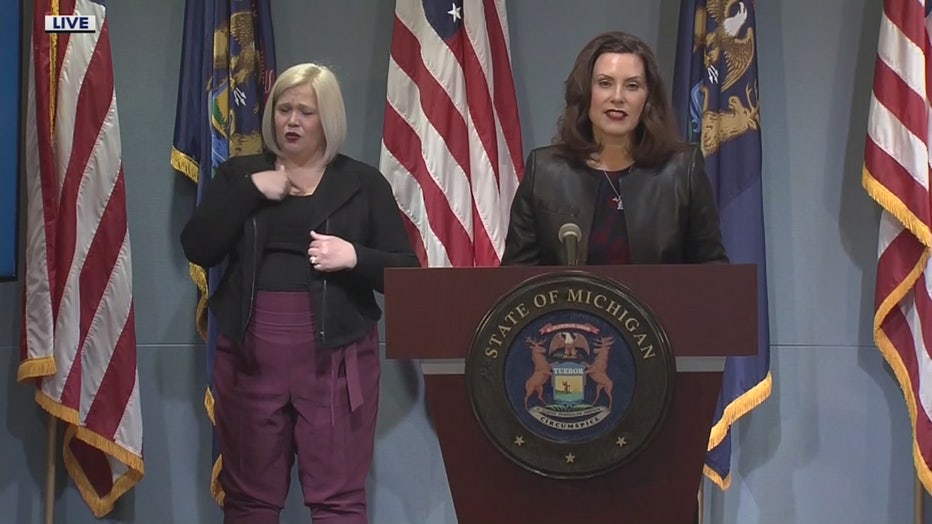 Meanwhile, earlier that morning Trump encouraged Whitmer to "make a deal" with protesters calling her to reopen the state, attempting to strike a balance between supporting demonstrators who expressed an affinity for him and minding the advice of his scientific experts.

"The Governor of Michigan should give a little, and put out the fire," Trump said. "These are very good people, but they are angry. They want their lives back again, safely! See them, talk to them, make a deal."

On Thursday hundreds of people congregated on the lawn of the capitol building brandishing signs that said "Shut down the lockdown" and "No work no freedom." Others wore the "Don't Tread On Me" flag as a cape. Others chanted, "Lock her up," a reference to the governor. Supporters of President Donald Trump were in the crowd.

"[Thursday's] scene at the capitol was disturbing, to be quite honest," Whitmer said. "Swastikas, confederate flags, nooses and automatic rifles do not represent who we are as Michiganders."

She thanked the Michigan State police officers who were at the capitol Thursday and the House and Senate sergeants for keeping people safe.

Republican state Senator and Majority Leader Mike Shirkey also addressed the protest Friday, saying the protesters "do not represent the Senate Republicans. At best, those so-called protestors are a bunch of jackasses."