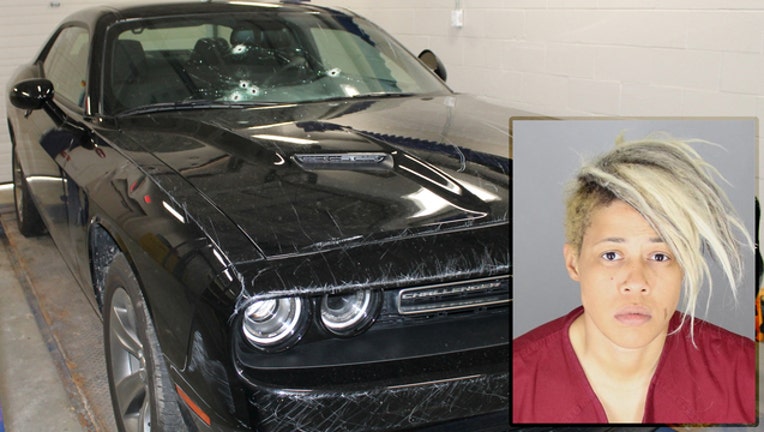 WATERFORD, Mich. (WJBK) - The woman accused of following a teen, leading Waterford police on a car chase, then striking an officer with her car has been was arraigned Friday on three charges.

Tiffany Edwards, 34, was charged with assault with intent to do great bodily harm less than murder (a 10-year felony), third-degree fleeing an officer via vehicle (a 5-year felony), and assaulting/resisting/obstructing (a 2-year felony.)

Police say a 17-year-old woman reported she was being followed turn-for-turn by a dark-colored Dodge Challenger after she left a CVS at Highland and Crescent Lake roads just after midnight Wednesday.

The suspect, Edwards, allegedly followed the teen home, and parked in a vacant lot next door.

The teen reported the incident to her parents, who say they witnessed Edwards leave her car and enter the family's yard, coming as close as their back deck.

Police arrived and found Edwards in her car in the vacant lot. She fled the scene and police pursued, until backing into a residence at Sunderland and Williams Lake Road. A second police car had joined the pursuit.

Weapon drawn, the second responding officer ordered the woman out of her car. She proceeded to accelerate and hit the officer, as the officer fired eight shots into her windshield.

Police say the suspect fled again, with the officer on the hood of her car. He was thrown to the ground when she made a turn onto Williams Lake Road.

The first responding officer managed to catch up, and it continued until she reached a dead end. She then attempted to flee on foot. She was found with a tracking dog near a business by Airport Road and N. Service Drive.

The officer struck by the car suffered non-life threatening injuries and has since been released from the hospital.

Police did not give a reason for the suspect's behavior, but will send a warrant request to the Oakland County Prosecutor's office once the investigation is complete.

Edwards was arraigned before 51st District Court Judge Todd Fox and received a $50,000 cash bond. Edwards is currently being held in Oakland County Jail. Her preliminary exam is scheduled for June 21.