CINCINNATI - The slumping Aristides Aquino needed a boost. So did the Cincinnati Reds after being routed in the series opener against Detroit.

Aquino, who was 2 for 30 since Aug. 19 and hitting just .181, blasted a three-run homer in a five-run third inning to lead the Reds to 7-4 win over the Tigers on Saturday night and stay put in the second NL wildcard slot.

"I was looking for a good pitch to hit right there and that pitch just hung right there, so I hit it well," said Aquino of the 82-mph Matthew Boyd slider he deposited in the left-field seats.

Cincinnati manager David Bell said Aquino's defensive prowess in the outfield has kept him in the lineup semi-regularly through his struggles, so it was good to see him hit the ball hard again. 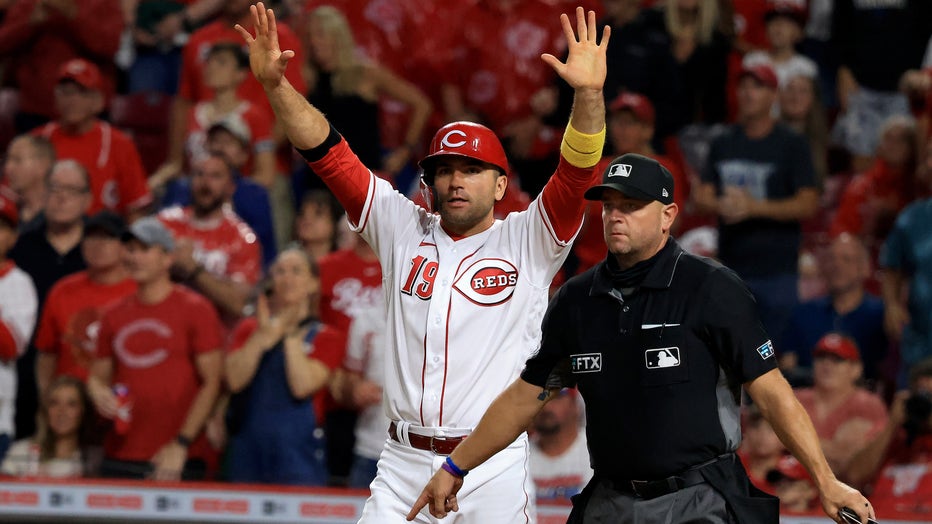 CINCINNATI, OHIO - SEPTEMBER 04: Joey Votto #19 of the Cincinnati Reds directs his teammates during the seventh inning in the game against the Detroit Tigers at Great American Ball Park on September 04, 2021 in Cincinnati, Ohio. (Photo by Justin Cast

"He has the potential, he has the ability to do exact what he did tonight," Bell said. "We've seen that before."

Tyler Naquin drove in two with a pinch-hit triple in the seventh inning for the Reds, who bounced back after being beaten by the Tigers 15-5 on Friday for their seventh loss in 10 games.

Eric Haase hit a three-run homer to put the Tigers up in the third, but the Reds answered with the big inning of their own, with Joey Votto and Eugenio Suárez also driving in runs.

A bases-loaded walk to Dustin Garneau in the Tigers fourth made it a one-run game. But Tyler Mahle (11-5) got out of it with no further damage

"An unbelievable play in a humongous spot," Mahle said.

Naquin, who pinch-hit for Aquino with two outs in the seventh, tripled over the first-base bag to drive in two and give Cincinnati some breathing room.

"The first four pitches of the game (were) out of the strike zone, and it looked like he was battling," Tigers manager A.J. Hinch said. "He was scrambling from that point forward. He pitched out of a little bit of damage when they had a couple base runners, then they got him for the big inning."

With his third-inning shot, Haase became the first Tiger to post a 20-homer season while playing at least 60 percent of his games at catcher since Mickey Tettleton in 1992. Detroit now has multiple players with 20 or more homers in a season for the first time since 2017. Current Reds right fielder Nick Castellanos was a member of the Tigers that season and hit 26.

PLEASE AND THANK YOU

Detroit right-hander Drew Carlton made his major-league debut in the seventh inning and with his first pitch got Delino DeShields to fly out to right. That ended the inning, and Carlton was done for the night. According to Elias Sports Bureau, he was the first Tigers pitcher since at least 2000 to throw just one pitch in his major league debut. The last pitcher to do that San Diego’s Buddy Baumann on July 16, 2016.

Reds OF Nick Senzel, who is rehabbing from knee surgery at the team's Arizona facility, may not return this season. "It didn’t sound like it was going to be any time real soon," Bell said.

Tigers right-hander Casey Mize (7-7, 3.59 ERA) will be on the mound to face Reds right-hander (7-14, 4.30) in the rubber game of the interleague series. Mize allowed five hits and three runs through six innings in a loss to Minnesota. Castillo gave up five hits and three runs while striking out eight in six innings in Monday's loss to the Cardinals.