DETROIT - Luis Arraez had three hits to raise his major league-leading average to .342, Carlos Correa homered and the Minnesota Twins scored six late runs to beat the Detroit Tigers 8-4 on Saturday night for just their fourth win in 12 games.

Detroit's Miguel Cabrera had a run-scoring single in a three-run eighth and with 1,839 RBIs passed Ted Williams on the career list and tied Al Simmons for 13th place.

Joe Ryan (7-3) gave up one run and four hits in 5 2/3 innings for the AL Central leaders, striking out seven and walking one. He is 2-0 in six starts since a June 14 loss at Seattle. 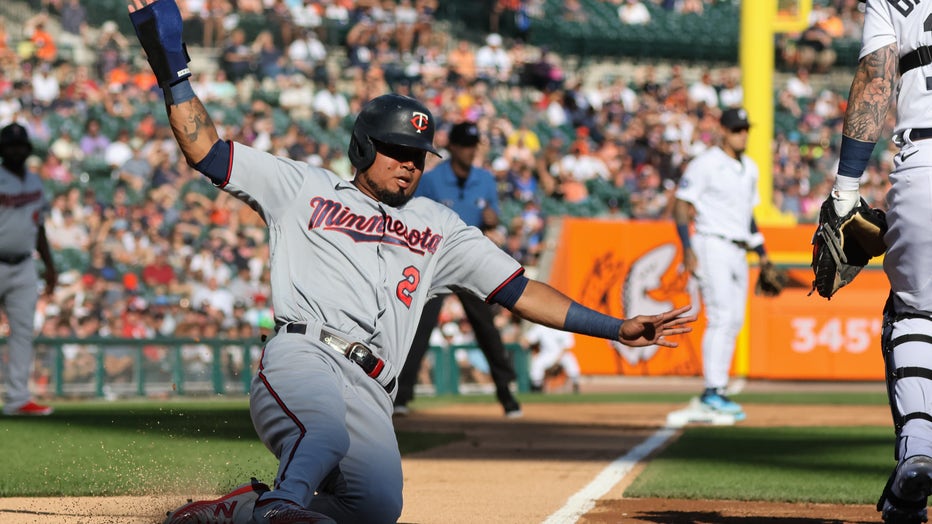 DETROIT, MI - JULY 23: Minnesota Twins first baseman Luis Arraez (2) slides into home plate to score a run during the first inning of a regular season Major League Baseball game between the Minnesota Twins and the Detroit Tigers on July 23, 2022 at C

Javier Báez's RBI single cut the deficit in the sixth, but the Twins opened a 5-1 in the seventh after loading the bases when Alex Kiriloff singled against the shift. José Miranda singled off third baseman Jeimar Candelario's glove and Candelario misplayed Kyle Garlick's grounder for an error.

Gio Urshela hit a sacrifice fly and Luis Arraez added a two-run single off Joe Jiménez. Correa was denied another homer by Akil Baddoo's leaping catch at the left-field wall.

Urshela followed with an RBI single, and Gary Sánchez hit into a run-scoring forceout.

The game was the opener of a rare two-game weekend series that resulted from the lockout-delayed start to the season. Friday’s scheduled game was moved to a May 31 doubleheader, allowing the Tigers to play a Thursday doubleheader against the Oakland Athletics to make up two April games.

Twins: LHP Caleb Thielbar, who leads Minnesota with 40 relief outings, was placed on the 15-day IL with a left hamstring strain, a move retroactive to Tuesday. RHP Yennier Canó was recalled from Triple-A St. Paul.

Tigers: RHP Will Vest was reinstated from the paternity list and optioned RHP Ángel De Jesus was optioned to Triple-A Toledo.