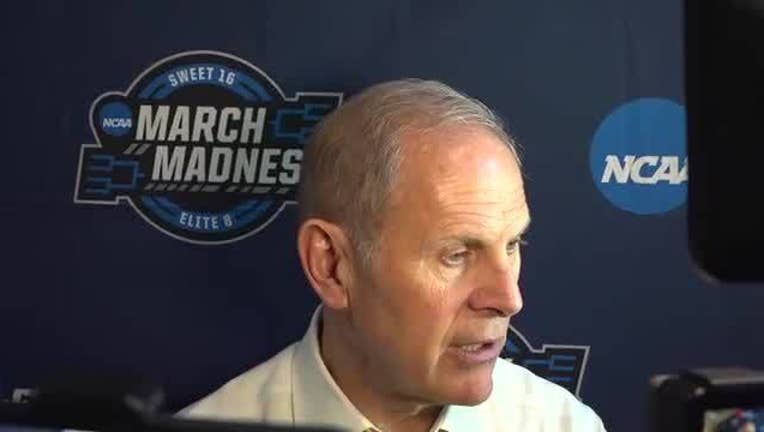 INDEPENDENCE, Ohio (AP) - High on a wall and across the courts from where John Beilein was sitting, the Cavaliers' basketball history stared the new coach in the face.

He wants to make it richer.

"Look at all those banners up there," Beilein said, pointing toward reminders of the 2016 NBA championship, Eastern Conference titles and division crowns won by the Cavs - most of them in the past decade. "It's been done before. Why can't it be done again?"

This basketball renaissance man is ready for his next recovery project.

Saying he won't use the word "rebuild," Beilein was introduced Tuesday by the Cavs, whose surprising choice of the 66-year-old was met with skepticism only by those who haven't crossed paths with him over his more than four decades as a coach.

Cleveland's expansive search ended last week with someone who has won at every level in college - most recently during a 12-year run at Michigan - and will now see if his team-first, family-oriented style can work in the pros.

"He's all the things you would want in a head coach," Cavs owner Dan Gilbert said.

Even before being escorted onto the podium by general manager Koby Altman, Beilein showed his eagerness to turn around a team whose run of four straight finals ended this season following the departure of LeBron James. The Cavs went 19-63 and parted with two coaches.

About an hour before the news conference, Beilein peeled off his suit coat, went onto the floor and rebounded for Cavs forward Larry Nance Jr., one of the team's core players. Moments later, he chatted with point guard Collin Sexton, who had just gotten off a plane from the Philippines and was soon practicing a jump shot that improved dramatically during his rookie season.

He was joined by his wife, Kathleen, who has been with him every step of the way of a coaching career that began at Newfane Central High School in New York. All four of their children were in attendance along with four grandchildren, including grandson Johnny, who recently revealed to his grandpa that the Golden State Warriors are his favorite team.

Beilein said coaching in the NBA was never on his bucket list. While he accomplished everything in college coaching, the exception being a Division I NCAA championship, Beilein says he would have had no regrets had he finished his career at Michigan.

But the chance to bring back the Cavs was too much to pass up. His courtship with Cleveland was a whirlwind. An initial meeting with Altman quickly escalated to Gilbert sitting in his kitchen to work out a five-year contract.

"Rebuild is not a word we're going to use here, I saw it more as a renaissance," he said. "Let's just change and let's see what we can through different trial and error. It was one (job) that was appealing to me. Every single time that we've decided to do this, some people would say with every job, and probably with this one, 'What are you crazy? Why are you doing that? And I say exactly that, opportunity and challenges go hand in hand."

Beilein credits much of his success to his ability to connect with young players. He's changed with the times, adjusted to latest trends. He does have some old-school ways, but he's also open to new ideas, supplementing his message with analytics.

"That's right," he said proudly, joking that Gilbert should handle the question about his reasons for taking the job.

Beilein said he's never worried about anything but the present.

"Coaches, we don't complain on paydays," he said. "That's part of this job. You have to get it done and that's part of it. I've been able to stay away from that and that's the only plan here: We're going to get this right and I'm going to coach as long as I can coach and I hope that's a long time."