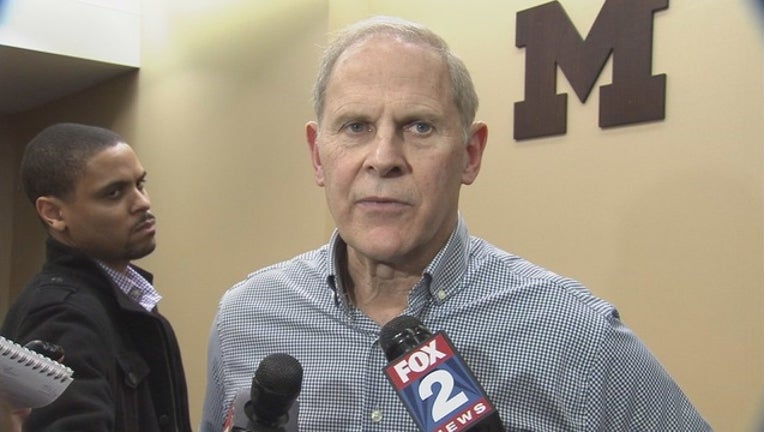 ANN ARBOR, Mich. (AP) - John Beilein is staying at Michigan after exploring the possibility of coaching the Detroit Pistons.

"I love the University of Michigan and I am excited about coaching our Men's Basketball Team next season and in the years to come!" Beilein tweeted Wednesday. "Let's go hang some more banners at "THE GREATEST UNIVERSITY IN THE WORLD.""

Beilein interviewed with the Pistons , a person with knowledge of the situation told The Associated Press last week on condition of anonymity because he was not authorized to speak publicly about the matter.

The 65-year-old Beilein has coached at Michigan for 11 seasons with a 248-143 record. He has led the Wolverines to two Final Fours, losing in the national title game this year and in 2013. Beilein has won a pair of Big Ten championships and two Big Ten Tournament titles.

"We are thrilled that John Beilein will be our coach now and into the future," Michigan athletic director Warde Manuel said in a statement. "We made it a priority to sit down shortly after our tremendous run in the Final Four to discuss and solidify his future at Michigan."

The Pistons have made the playoffs only once in nine years after advancing at least to the Eastern Conference finals six straight years, winning the 2004 NBA title and falling a victory short of repeating as champions in 2005. Detroit has been looking for a coach for a month since firing Stan Van Gundy, who was also its president of basketball operations.

Long considered one of college basketball's top offensive minds, Beilein is 799-461 in 39 seasons. His college coaching career began in 1978 at Erie Community College, and he went on to Nazareth and Le Moyne. Beilein, who is from Burt, New York, also made Division I stops at Canisius, Richmond and West Virginia before moving to Michigan.

When Beilein's program hit a bit of a rut, he adapted by bringing in new assistants to help shore up his team's weaknesses at the defensive end. Michigan was one of the top defensive teams in the country this past season, again falling just one game short of a national title.

"I have changed like the wind," Beilein said before this year's NCAA Tournament. "And, maybe that's why I'm still coaching."