Michigan State jumped out to a 22-8 lead behind nine points from Christie. A 10-0 run, opened and closed by Christie, early in the second half made it 44-28 and the Spartans led by double figures the rest of the way.

Marcus Bingham Jr. chipped in with 10 points and six blocks for Michigan State (2-1). Bingham and Brown each grabbed a team-high six rebounds as the Spartans outrebounded Butler 41-25. 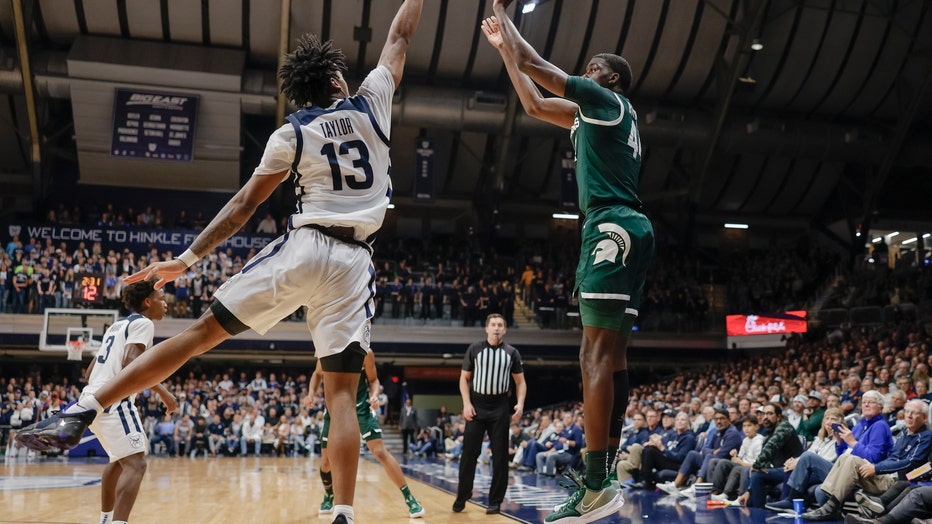 INDIANAPOLIS, IN - NOVEMBER 17: Jayden Taylor #13 of the Butler Bulldogs defends against the shot of Gabe Brown #44 of the Michigan State Spartans during the first half at Hinkle Fieldhouse on November 17, 2021 in Indianapolis, Indiana. (Photo by Mic

It was the first time Michigan State's Tom Izzo ever coached at Hinkle Fieldhouse.

Ty Groce had 15 points and eight rebounds, and Chuck Harris added 13 points for Butler (3-1). Groce and Harris combined to shoot 8 for 29 and the Bulldogs finished at 29.1% from the field.

Butler and Michigan State last met in the 2010 Final Four when Gordon Hayward led the Bulldogs to a 52-50 victory with 19 points and nine rebounds.