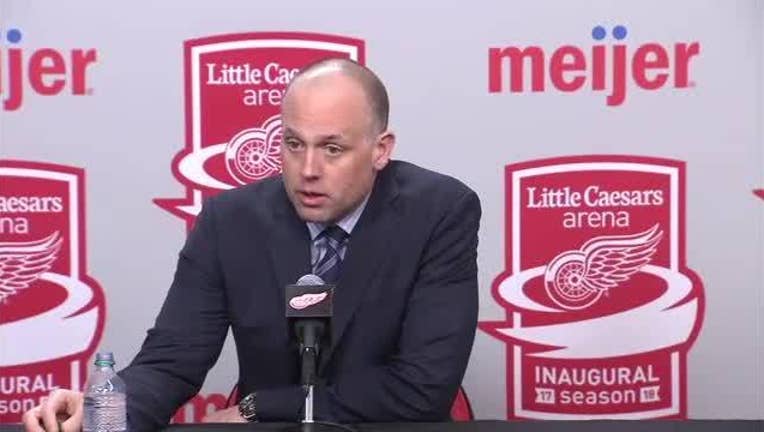 WASHINGTON (AP) - In his first season as a Stanley Cup champion, Alex Ovechkin is enjoying hockey as much as ever.

It showed again Tuesday night, when he scored his 21st hat trick and first this season to lift the Washington Capitals over the Detroit Red Wings 6-2.

The 33-year-old Ovechkin entered the night in a familiar spot as the NHL's goal leader. He has 25 following his hat trick, halfway to a potential eighth 50-goal season. His team has won three straight, and 10 out of 12.

"After last year, you just enjoy it," Ovechkin said about defending Washington's Stanley Cup title. "Of course, you don't want to too much enjoy it, but I try to be the same, over and over again. And it's fun."

Nicklas Backstrom had four assists to help the Metropolitan Division leaders score six or more goals for the fourth time this season. T.J. Oshie added a goal in his return from an 11-game layoff due to a concussion, and Travis Boyd and Brett Connolly also scored early.

Braden Holtby made 35 stops for Washington, which had scored 12 straight goals over a stretch of more than six periods before Detroit's Dylan Larkin and Gustav Nyquist broke through in the third.

"One thing we've wanted to learn this season is we've kind of gotten sloppy at times when we've gotten leads," Holtby said. "At times tonight we played really well. At times we kind of turned it into a chance for chance, and I think it's something we just want to keep continuing to build at."

Red Wings coach Jeff Blashill pulled goaltender Jonathan Bernier midway through the second period after he saved 10 of Washington's first 15 shots. Jimmy Howard came in to finish off Detroit's first road loss since a previous trip here on Nov. 23, a night after making a season-high 42 stops in a win over Los Angeles.

"I don't know if I've been in a 5-0 game when a goalie had as little chance as he had," Blashill said of Bernier. "I feel bad for him. But what he's got to do is put it behind him and move on."

Ovechkin has at least a point in 12 consecutive games (13 goals, six assists), the Capitals' best such streak this season.

He benefited from good fortune on his first goal to put Washington up 3-0 with 7:01 left in the first period, when his wayward slap shot redirected off defenseman Niklas Kronwall and past Bernier.

Ovechkin made it 4-0 just before the midway point of the second period when he took Carlson's feed and beat Bernier with a wrist shot to finish an odd-man rush. He completed his hat trick in the third to make it 6-1, taking Christian Djoos' feed and smashing a low shot that had enough power to squirm beneath Howard's right pad.

"It's a privilege to play with him out there," Oshie said of Ovechkin. "And you think maybe there's no other way that he can kind of amaze you and wow you, but that's another example tonight."

Detroit recalled D Brian Lashoff from AHL Grand Rapids on Tuesday, but he was scratched vs. Washington. ... Holtby came less than one period shy of his first consecutive shutouts since holding Columbus and Ottawa scoreless on Jan. 5 and Jan. 7 of 2017. .. Three-time Cy Young Award winning pitcher Max Scherzer, currently of the Washington Nationals and formerly of the Detroit Tigers, was in attendance.