Ovechkin reached 20 goals for the 15th consecutive season to start his career, a feat previously achieved by Marcel Dionne, Mike Gartner, Jaromir Jagr and Mats Sundin. The 34-year-old Ovechkin also had an assist.

T.J. Oshie had a goal and an assist, Tom Wilson also scored and Evgeny Kuznetsov had three assists for the Capitals. Ilya Samsonov stopped 25 shots.

Robby Fabbri and Luke Glendening scored for Detroit, which has been outscored 24-4 in its last five games. Jonathan Bernier made 29 saves.

The Capitals scored twice in the second period to erase a 1-0 deficit. Oshie tied it with a power-play goal 2:19 into the period, and Ovechkin’s first goal gave Washington the lead about seven minutes later. Ovechkin put a shot in off Bernier from the bottom of the left circle after swooping behind the net. 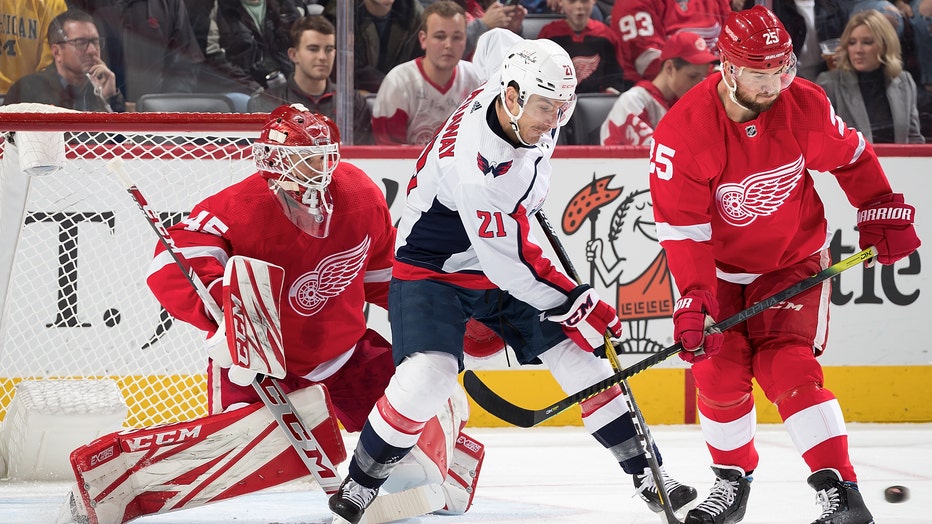 DETROIT, MI - NOVEMBER 30: Mike Green #25 of the Detroit Red Wings looks to block the shot in front of Garnet Hathaway #21 of the Washington Capitals and goaltender Jonathan Bernier #45 of the Wings during an NHL game at Little Caesars Arena on Novem

Wilson scored his 10th with 5:37 remaining before Glendening pulled Detroit back within one 9 seconds later. It was Glendening’s fourth goal.

Ovechkin scored into an empty net with 1:35 and 55 seconds left.

NOTES: Washington C Nicklas Backstrom, out with an upper-body injury, was scheduled to take part in Saturday’s morning skate but is not ready to return. ... Detroit acquired AHL G Eric Comrie from the Arizona Coyotes in exchange for minor league D Vili Saarijarvi. Calvin Pickard was recalled from AHL Grand Rapids and played in Friday’s 6-1 loss at Philadelphia after Jimmy Howard suffered a lower-body injury Thursday in a 6-0 loss to Toronto. Howard is on the injured list. ... The Red Wings also assigned D Jonathan Ericsson to Grand Rapids.