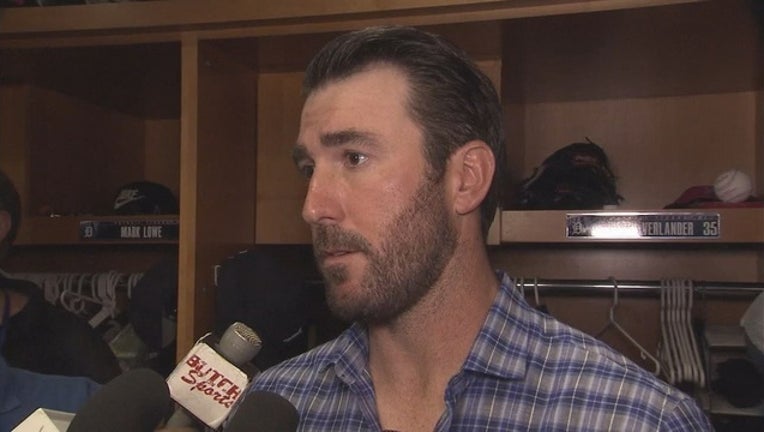 ANAHEIM, Calif. (AP) - Over the first 4 1/2 innings at Angel Stadium, Jhoulys Chacin and Justin Verlander retired all 27 batters they faced. They kept trading zeros deep into the eighth inning of a scintillating pitchers' duel.

After the Los Angeles Angels finally cracked Verlander, Chacin kept pushing all the way to a breakthrough victory for his new team.

Chacin threw a four-hitter, and Cliff Pennington's tiebreaking RBI single during a five-run eighth propelled the Angels to a 5-1 victory over the Detroit Tigers on Monday night.

With shadows on the field for an early holiday start at Angel Stadium, nobody could get a hit off Chacin (1-1) or Verlander (4-5) until C.J. Cron's single leading off the fifth for Los Angeles.

Chacin lost his own perfect game bid on Andrew Romine's two-out single in the sixth, but the veteran Venezuelan right-hander persevered all the way to his third career complete game in his fourth start for the Angels.

"It felt great, and I'm really happy," Chacin said. "I feel like my arm is just getting stronger, and hopefully it can stay like that the whole season."

Los Angeles acquired Chacin from Atlanta earlier this month to bolster their injury-battered rotation. In his fourth start on the West Coast, he struck out 10 while throwing the Angels' first complete game of the season.

"There's no doubt he was hitting his spots," Angels manager Mike Scioscia said. "He got a lot of called strikes and some ugly swings from some really good hitters. His command was terrific. I don't even think he threw 20 pitches (while) behind in the count. It was unbelievable."

Chacin's dominance was invaluable after the Angels' bullpen was taxed in a 13-inning loss to Houston on Sunday, their fourth defeat in five games. Facing Detroit for the first time, the veteran right-hander threw his first complete game since 2011.

He fell just shy of the second shutout of his career when J.D. Martinez doubled and scored on Victor Martinez's long fly in the ninth, but Los Angeles had already given him plenty of room for error after eight nail-biting innings.

Chacin's satisfaction was likely as large as the frustration felt by the Tigers, who wasted a gem from Verlander.

"When we don't do anything offensively, it seems like it's a lineup epidemic," Detroit manager Brad Ausmus said. "When you're in a 0-0 game, there's no room for error, as you saw."

Verlander, who threw eight scoreless innings last week against Philadelphia, gave up only one hit in the first seven innings while retiring the first 12 Angels he faced. He got no support from his teammates in Detroit's fourth loss in five games.

"It's tough for everybody here," Verlander said. "You never know with our lineup. We can put up runs in a hurry, so you just kind of keep waiting for the big hit. Just keep going out there and plugging along, and hoping that it happens."

Verlander sat down eight straight Angels shortly after Cron's hit, but the bottom of their order finally beat him. After Johnny Giavotella and Rafael Ortega opened the eighth with back-to-back singles, Pennington failed on two bunt attempts before confidently lining a single to left.

Gregorio Petit then grounded to short, but Romine's throw home was too late to get Ortega, and James McCann's subsequent throw to first skipped into right field, scoring Pennington.

Albert Pujols and Cron added RBI singles off Buck Farmer in the eighth. Pujols has 20 career RBIs on Memorial Day, the most among active big leaguers. He is batting .363 with 32 RBIs against Detroit in his career.

Tigers: Right-hander Jordan Zimmermann went through a pregame workout at Angel Stadium, and he'll throw a bullpen session Tuesday in hopes of returning later this week from a groin strain.

Angels: Closer Huston Street was activated from the disabled list before the game. He hadn't pitched since April 23 due to a strained oblique muscle.

Angels: Hector Santiago (3-3, 4.58 ERA) got ejected in the third inning of his last start in Texas.