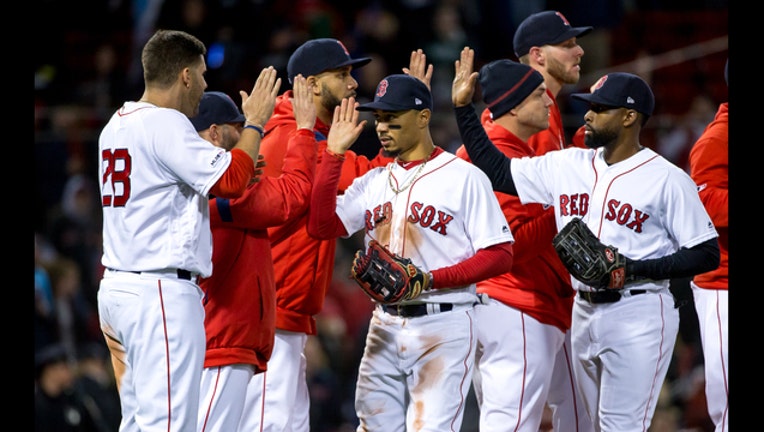 Porcello got his first win of the season and the Red Sox continued to climb back from a dreadful start with a 7-3 win over the Detroit Tigers on Thursday night.

"It's been a lot better as of late and we've got to continue to get better," said Porcello, who struck out five and pitched deep enough into the game to give Boston's weary relievers a little rest.

"We were digging our team a hole so bad each game that it was virtually impossible for our offense to get things going and do what they needed to do," Porcello said. "I think we all have a lot of room to get better."

It was the second straight night Boston's starter went six innings. The Red Sox also followed up their season-high 12 hits in an 11-4 rout Wednesday with 10 hits Thursday, seven of them for extra bases.

Michael Chavis hit a two-run homer, and Andrew Benintendi and Mookie Betts had two doubles apiece for the Red Sox, who have five wins in their last seven to improve to 11-15.

Porcello (1-3) struck out five and allowed three runs, six hits and two walks in six innings. It was the fifth start of the season for the 2016 AL Cy Young Award winner, who missed out on a victory in his last start because of a blown save.

"He kept us in the game. We just hadn't scored many runs behind him," Betts said. "Today was a day where we gave him some run support and he pitched great."

Nicholas Castellanos hit a two-run homer for the Tigers, who swept a doubleheader Tuesday but left their only visit to Boston this season with a four-game split.

Jordan Zimmermann (0-4) allowed five runs and five hits in three innings. He walked three and struck out two before coming out of the game with elbow discomfort before the bottom of the fourth.

"He was pitching with it, which was not good," Detroit manager Ron Gardenhire said. "We'll get him checked out once we get to Chicago."

Chavis hit his second homer in five big league games in the second inning. Rafael Devers hit a two-run double in the third for Boston.

Detroit got to Porcello in the third with three runs, two of them on Castellanos' first homer of the season on a liner just inside Pesky Pole to put the Tigers up 3-2.

The lead was short-lived. J.D. Martinez hit an RBI single to tie it, and Devers drove in two with a double. Boston tacked on two more runs in the fourth on back-to-back doubles by Benintendi and Betts with two outs against reliever Buck Farmer, who replaced Zimmermann.

Benintendi doubled again in the sixth, driving in Sandy León after he doubled to the right-field corner with one out. It was the sixth double of the game for the Red Sox, who had 22 hits while winning the final two games of the series.

Benintendi was 2 for 3 and Betts went 2 for 4. Betts said the pair is getting used to their new roles in the order with Benintendi hitting first and Betts following.

"It's cool to see Benny and Mookie making me look good," manager Alex Cora said. "That's what we're looking for. Both guys, regardless if it's Mookie leading off or Benny leading off, they can put pressure on. People know that with one swing right away, it can be one-nothing us or there's a man at second with no out."

"Frustrating," catcher John Hicks said after going 1 for 4 Thursday. "We played two really good games here and then the last two got away from us."

Tigers: INF Jordy Mercer (right quadriceps strain) was scheduled to begin a rehab assignment Thursday night with Class A Lakeland. ... RHP Casey Mize, the No. 1 overall pick in the 2018 draft, was promoted to Double-A Erie after going 2-0 with Lakeland, allowing just one earned run in 26 innings.

Red Sox: With rain in the forecast, Cora said the Red Sox would hold off on picking a starter for Friday's series opener against the Rays. RHP Charlie Morton (2-0, 3.38) is up for Tampa Bay.