Penn State’s four-year starter, who opted to return for his sixth and final collegiate season, threw four touchdown passes to lead the No. 11 Nittany Lions over Michigan State 35-16 in the regular-season finale on Saturday.

Afterward, the program’s longest-tenured quarterback made a victory lap with his teammates, high-fiving and hugging fans who watched him lift the Nittany Lions out of danger with two masterful, late scoring drives to swat down the comeback-minded Spartans. 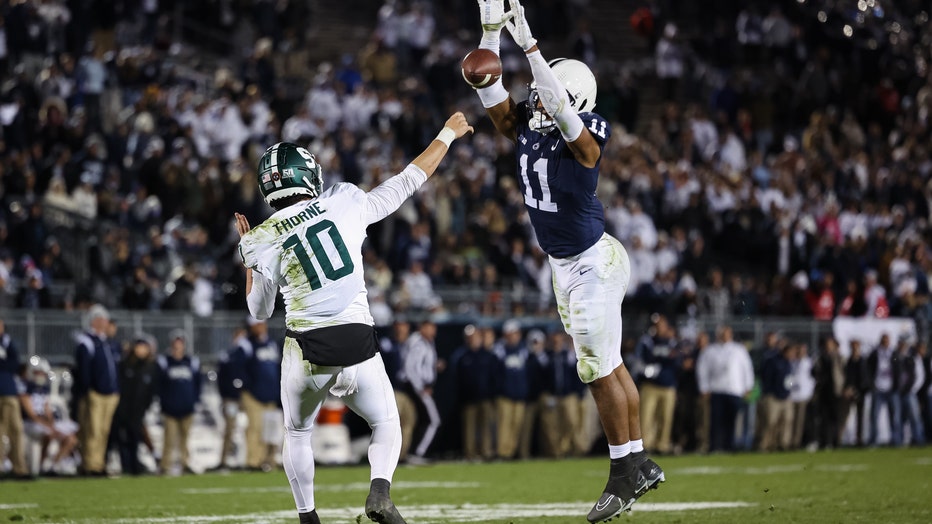 STATE COLLEGE, PA - NOVEMBER 26: Abdul Carter #11 of the Penn State Nittany Lions knocks down a pass attempt by Payton Thorne #10 of the Michigan State Spartans during the second half at Beaver Stadium on November 26, 2022 in State College, Pennsylva

"For me, it’s the culmination of everything this year has been," Clifford said. "It’s been little moments here and there that nobody even sees that I won’t even tell anybody because It’s special to me, it’s special to the guys that I’ve shared it with and it’s part of the journey."

Tight end Theo Johnson caught two touchdown passes, Tyler Warren and running back Nick Singleton each caught one, and KeAndre Lambert-Smith threw a touchdown pass and caught another for the Nittany Lions (10-2, 6-2 Big Ten, No. 11 CFP), who won 10 games for the fourth time under coach James Franklin.

Penn State evened the all-time series with the Spartans at 18-18-1, but needed a fourth-quarter push to do so.

The Spartans (5-7, 3-6) were down a handful of players due to injuries and suspensions;

Penn State held Michigan State to just eight rushing yards and was up 14-3 at halftime. But the Spartans cut Penn State’s lead to 21-16 with 10:52 to play after quarterback Payton Thorne led back-to-back 10- and 11-play touchdown drives in the third and fourth quarters.

Thorne threw to Maliq Carr who made a one-handed catch for a nine-yard score late in the third. The Spartans quarterback kept the ball himself for a two-yard touchdown on their next possession, though his two-point conversion pass failed.

But Penn State’s offense took control from there.

Clifford led an 11-play drive of his own to ice the game on senior day. He found Singleton in the flats and the rookie running back skipped through the Spartan defense for a 12-yard score. He also threw a 35-yard dart to Lambert-Smith between defenders with 3:56 to play as a finale.

"That was a huge drive in the game," Franklin said. "They had gotten momentum, were able to get it down to a one-score game, so being able to answer there was a big-time drive."

The teams traded punts until Singleton took over on Penn State’s third possession. The freshman carried five times for 54 yards to steer the offense into the red zone where Clifford threw over the middle to a wide open Johnson. The 11-yard touchdown pass capped an 11-play, 90-yard drive with 40 seconds left in the quarter.

The Nittany Lions got creative on their next possession.

They pulled up to midfield, where Clifford threw backward to Lambert-Smith along the sideline. The wideout then threw deep to an uncovered Johnson for a 48-yard touchdown that made it 14-0 with 11:22 left in the half.

The Spartans finally responded when Jack Stone kicked a 51-yard field goal to finish an 11-play drive over the last 1:27 before halftime.

Johnson laughed after the game as he thought about how he and Lambert-Smith practiced the wideout pass earlier in the week.

"That was the most open I’ve ever been," Johnson said. "Probably the easiest touchdown I’ll ever have."

Tucker said after the game that defensive back Malcolm Jones, the only player who had been suspended but not charged in the tunnel incident, has been reinstated.

Michigan State: This game was going to be tough for the Spartans no matter what, being down three offensive linemen, three defensive linemen, two corners, a tight end, a safety and a long snapper.

Eight other players had been suspended indefinitely after the fight in Ann Arbor, Michigan. Of the seven charged, defensive back Khary Crump facing a felony assault charge and the other six, including standout linebacker Jacoby Windmon, face misdemeanor assault charges. It’s an unceremonious end for a squad that won 11 games a season ago.

Penn State: The Nittany Lions have played with their ears pinned back since they let a fourth-quarter lead slip away against Ohio State on Oct. 29. In their final four games, opponents scored just five offensive touchdowns. The offense also is hitting on all cylinders with Allen and Singleton co-starring. They should be a formidable opponent for whoever they draw in their bowl game, which could come in a sunny location on New Years Day.