With Carson Wentz recovering from foot surgery, Ehlinger is competing with second-year quarterback Jacob Eason to possibly take the team's first snap in two weeks when the season opens.

To keep Eason healthy for Week 1, the Colts let 28-year-old Brett Hundley finish the game under center and he took full advantage. 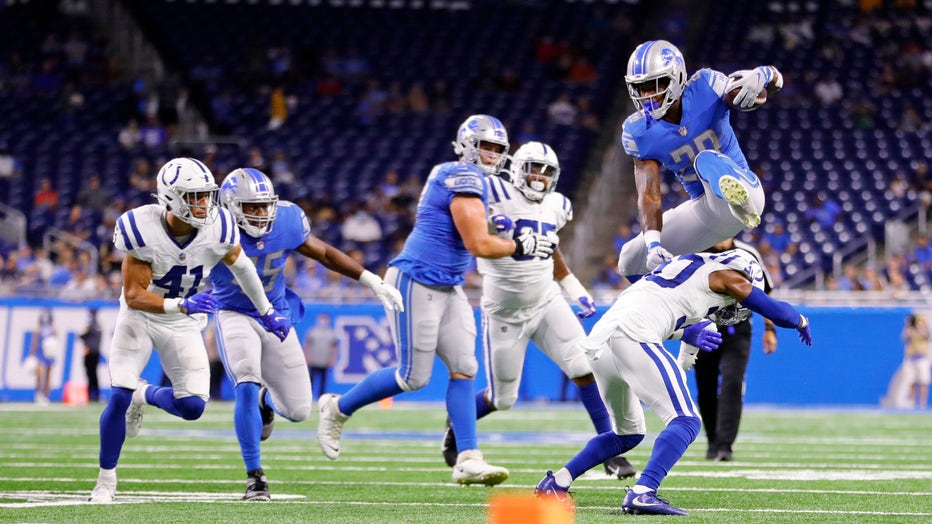 DETROIT, MICHIGAN - AUGUST 27: Jermar Jefferson #28 of the Detroit Lions runs for a first down during the second quarter of the game against the Indianapolis Colts at Ford Field on August 27, 2021 in Detroit, Michigan. (Photo by Leon Halip/Getty Imag

Hundley threw a 3-yard touchdown pass to Deon Jackson and the rookie running back rushed for a tying, 2-point conversion. A few snaps later, linebacker Curtis Bolton intercepted David Blough's pass to set up Rodrigo Blankenship's 42-yard field goal — his fourth of the game — that put Indy ahead 20-17.

Jackson converted a third down with a 42-yard touchdown run up the middle with 1:50 left, sealing a 3-0 preseason for the Colts.

"I’m encouraged — I am," Campbell said. "Do we still have work to do? Yeah. A lot of work to do, but we have time. The hardest thing is to have urgency and patience at the same time. I don’t know how you do that, but I’m working on it."

The Lions looked like they might win the preseason game when they led 14-6 late in the first quarter on Tim Boyle's 15-yard touchdown pass to Quintez Cephus and Godwin Igwebuike's 1-yard run for a score.

Detroit's defense, which was one of the worst in NFL history last season, failed to stop Indy's fourth-string quarterback to hold on for the win.

Both teams are banking on a veteran quarterback to bounce back this season and each was rested in the preseason finale.

Wentz was acquired from Philadelphia for a third-round draft pick and a 2022 conditional second-round selection. He could be ready for the opener after breaking his foot and having surgery earlier this month. Wentz returned to practice earlier this week.

Colts: Backup OT Sam Tevi was carted off with an injured left leg early in the third quarter, when Hundley's first pass was intercepted by Corn Elder. ... WR Dezmon Patmon, who caught the 60-yard pass from Ehlinger, left the game with a foot injury.

Lions: Boyle hurt his right thumb during the game and had it protected in a brace. "We may have to prepare for him to be out for a bit," Campbell said. ... OT Dan Skipper went off the field on a cart late in the first half with an injury to his lower left leg.

Reich said Fisher tested positive, but is asymptomatic and will be able to continue his recovering from a torn Achilles tendon.

Reich said Nelson was deemed a close contact because of his proximity to Fisher.

"He could return quickly," Reich said.

FACE IN THE CROWD

Melissa Gonzalez, who competed for the United States in the 400-meter hurdles earlier this month, drew an ovation when she was appeared on the videoboards. She is married to Detroit quarterback Blough, who cheered her on at the Tokyo Games from the Lions’ practice facility.