Detroit - Sidney Crosby and Evgeni Malkin needed only 21 seconds to take advantage of an overtime penalty.

Crosby scored a power-play goal 1:33 into overtime to lift the Pittsburgh Penguins over the Detroit Red Wings 2-1 Friday night. Crosby scored by redirecting a slap pass from Malkin past goalie Jimmy Howard. Pittsburgh was on the power play after Detroit's Luke Glendening took Jared McCann down away from the play and was called for interference. 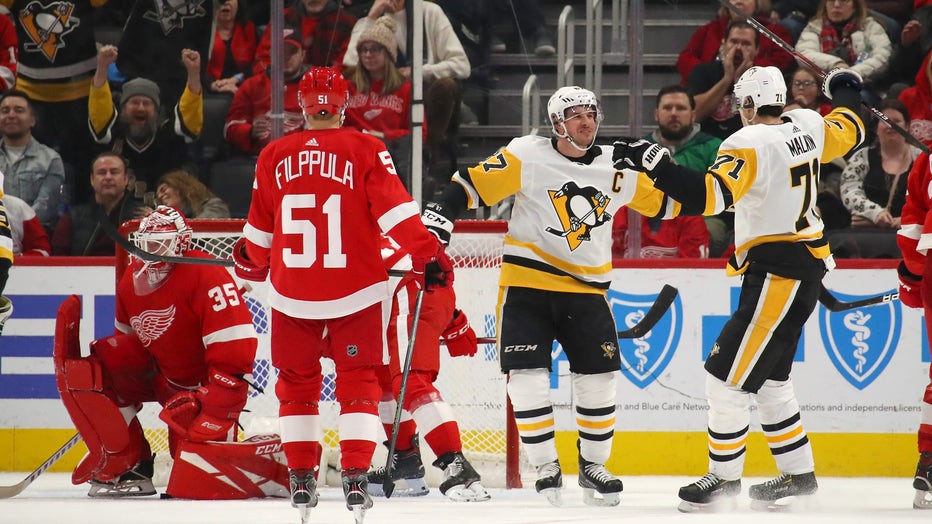 DETROIT, MICHIGAN - JANUARY 17: Sidney Crosby #87 of the Pittsburgh Penguins celebrates his game winning overtime goal with Evgeni Malkin #71 next to Jimmy Howard #35 of the Detroit Red Wings at Little Caesars Arena on January 17, 2020 in Detroit, Mi

“I don't think 4-on-3s are super, super dangerous lots of times, but when Crosby's around the net, it gets way more dangerous, because that's the one guy that you kind of at times leave to the goalie," Red Wings coach Jeff Blashill said. "You've got Malkin looking like he's going to shoot, so you've got to honor the shot, and there's just no way to get over there.”

It was Crosby's third goal in three games since returning from a 28-game absence because of a core muscle injury. Bryan Rust also scored for the Penguins in the third period after Filip Zadina put Detroit ahead in the second.

“It just didn't have a lot of flow," said Crosby, who has eight goals on the season. "Took us a bit to get into it, but the second and third, I thought we found our legs a bit and generated some really good chances.”

All three goals came with the man advantage.

Howard made 35 saves but remains winless since Oct. 29.

The Penguins rebounded from a 4-1 loss to Boston on Thursday night. They have not lost back-to-back games since late November, and Crosby has six points since returning.

“It's very impressive. I think it's hard for guys to come back off of injuries. Usually there's an adjustment process,” Penguins coach Mike Sullivan said. "Sid missed an extended amount of time, but once again, if you're asking me, does it surprise me? My answer would be no, because I watch his work ethic every day."

Crosby scored an overtime goal for the seventh straight season, tying him with Mats Sundin and Brendan Morrison for the longest streak since regular season OT was re-instituted in 1983-84, according to Stats Perform.

Zadina opened the scoring with a shot from the right circle that slid along the ice and past goalie Matt Murray, who was screened a bit in front by Detroit forward Givani Smith. Rust evened the score with 16:24 left in the third when he beat Howard with a wrist shot to the glove side.

It was the 20th goal of the season for Rust.

Howard was pulled after allowing three goals in his team's previous game, an 8-2 loss to the New York Islanders on Tuesday. He was sharper against the Penguins, and Detroit held its own defensively for much of the night.

Murray made 28 saves and has won four straight.

“We had tough travel last night, got in late on a back-to-back,” Murray said. “I thought the guys did a good job of just giving what we needed to do.”

NOTES: Howard has gone 13 starts without a win since beating Edmonton 3-1 in October. ... The last time Pittsburgh lost consecutive games was at Columbus and St. Louis on Nov. 29 and 30. ... Detroit's Dylan Larkin had a seven-game point streak snapped. ... Malkin assisted on both Pittsburgh goals.