DALLAS - Joe Pavelski scored his fourth goal of the season, Jake Oettinger stopped 20 shots in his first NHL start and the Dallas Stars beat the Detroit Red Wings 7-3 on Thursday night to finish undefeated in their season-opening four-game homestand.

Denis Gurianov had a goal and two assists while Ty Dellandrea had his first NHL goal and first assist — both coming in the final 5:08 when Dallas stretched out a one-goal lead. Seven Stars scored. 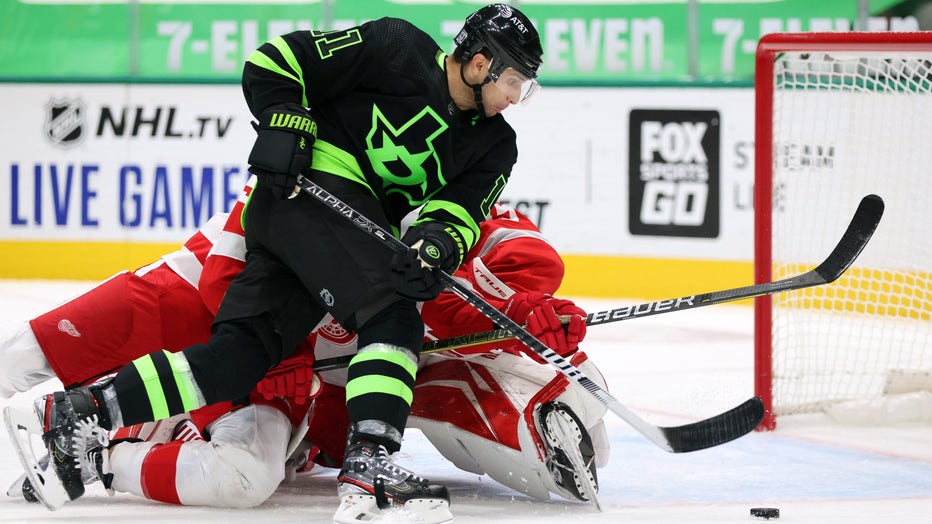 DALLAS, TEXAS - JANUARY 28: Andrew Cogliano #11 of the Dallas Stars scores a goal against Jonathan Bernier #45 of the Detroit Red Wings in the second period at American Airlines Center on January 28, 2021 in Dallas, Texas. (Photo by Ronald Martinez/G

Valtteri Filppula knocked in a rebound for his first goal for the Red Wings (2-5-1). Tyler Bertuzzi added a power-play goal in the third period, and Danny DeKeyser made it a one-goal game with 6:56 left before Dellandrea got his goal, with Dowling following with an empty-netter and Dellandrea assisting Klingberg.

Oettinger, who turned 22 last month, was the 26th overall pick in the first round by the Stars in the 2017 draft — they got Heiskanen with the third pick that year.

The goalie made his NHL debut in the playoffs last season, stopping all eight shots faced in two games after relieving Anton Khudobin. Oettinger was the backup through the postseason because of a knee injury to Ben Bishop, the veteran still out until at least late March while rehabbing from a second surgery.

Gurianov's unassisted goal in the second period was confirmed on a replay review after Red Wings forward Anthony Mantha slid through the crease, taking Bernier with him and knocking the net loose. The puck crossed the line just before the Red Wings did.

Pavelski is off to a fast start in the second of his three-season contract with the Stars, with four goals and five assists. In 67 regular-season games last year, the 36-year-old center had only 14 goals and didn't reach four goals and nine points until his 19th game The 14 overall goals matched his career low set in 46 games as rookie for San Jose in 2006-07. Pavelski then had 13 goals in 27 playoffs games for Dallas.

Marc Staal's eighth game with the Red Wings was the 900th of his NHL career. The first 892 games came the previous 13 seasons with the New York Rangers, who in September traded him to Detroit.

Both teams play back-to-back games Saturday and Sunday, the Red Wings at home against Florida, and the Stars on the road for the first time this season at Carolina. Dallas was initially supposed to open with four road games before those games were postponed because of COVID-19 protocols.