DETROIT - Phillip Danault scored 1:12 into overtime for his second goal of the game, and the Los Angeles Kings handed the Detroit Red Wings their first loss with a 5-4 victory on Monday night.

Danault's winning shot in front hit a defender's skate and bounced into the net.

Anze Kopitar had a goal and an assist, giving him 47 points in 42 games against Detroit. That's the second-most among active players, trailing only Chicago star Patrick Kane at 56 points. 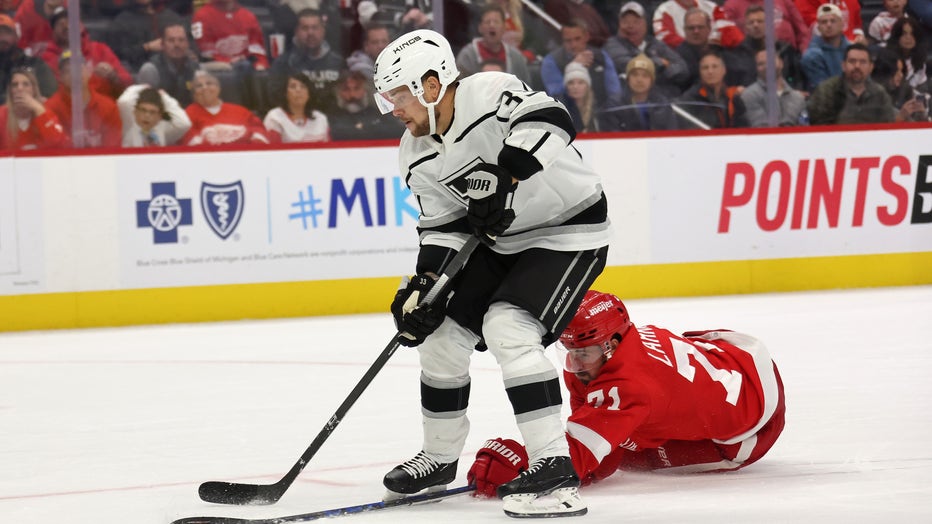 DETROIT, MICHIGAN - OCTOBER 17: Viktor Arvidsson #33 of the Los Angeles Kings gets the puck knocked off his stick from behind by Dylan Larkin #71 of the Detroit Red Wings as he tried to score on a empty net in the third period at Little Caesars Arena

Wings forward Oskar Sundqvist scored in the final minute of regulation to send the game into overtime. David Perron had two goals and an assist for Detroit (2-0-1), and Adam Erne added a goal. Ville Husso made 31 saves.

Kopitar dove toward a loose puck situated just behind Husso and knocked it in with 6:44 remaining in regulation. His first goal this season gave Los Angeles a 4-3 lead.

Erne scored on a 2-on-1 break 4:26 into the game. The Kings tied it 19 seconds later on Vilardi's third goal of the season.

Los Angeles grabbed the advantage at 14:40 when Kempe ripped a shot from the right circle over Husso's right shoulder.

Dominik Kubalik set up Perron's one-timer from the left circle midway through the second, tying it at 2.

The Kings regained the lead later in the period when Trevor Moore found Danault heading toward the net just after Detroit killed off a penalty.

Perron scored Detroit's first power-play goal this season with 8:46 left in regulation with another shot from the left circle.

Kings: At Nashville on Tuesday.

Red Wings: At Chicago on Friday.