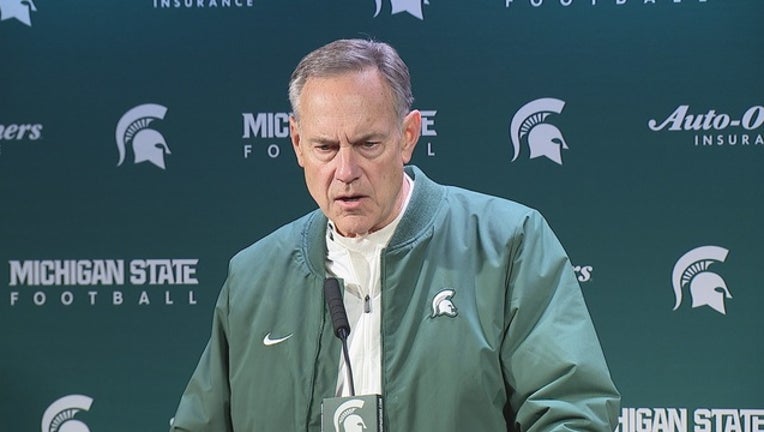 EAST LANSING, Mich. - Mark Dantonio and Michigan State have one more chance for a win during a tough midseason stretch that has raised questions about the state of the program.

"Coming off the Wisconsin game, we've got to plant our foot in the ground and drive forward. I think that's what you have to do," Dantonio said. "Disappointing in how we played up there, the outcome and everything that was going on with that. We've got to figure it out and reset and move forward, and I think we're capable of that."

That comment was about as close as Dantonio came to a rallying cry during his weekly news conference Tuesday. For the most part, the Michigan State coach's session with reporters felt routine even though the team is coming off an absolute drubbing.

The Spartans lost 38-0 to Wisconsin two weekends ago, and that came after a 34-10 defeat at the hands of Ohio State. The team has clearly slipped in recent seasons, and now it's becoming harder to envision a major turnaround this year.

Earlier this season, Dantonio called out his team publicly after a substandard offensive performance. He didn't do that Tuesday, perhaps realizing that such a move can only work so many times.

"I know everybody hates to hear me say it but I'm going to stay positive with our guys and believe in them," Dantonio said in response to a question about dropped passes. "I think that's the best thing that I can do."

Since winning the Big Ten in 2015, Michigan State is 15-16 in conference play. Dantonio shook up his offensive staff this past offseason, but he did so by changing roles instead of bringing in new people. The Spartans seemed to be making progress when they scored 71 points over two games against Northwestern and Indiana, but the losses to Ohio State and Wisconsin suggested that there's a big gap between Michigan State and the league's top teams.

"Young people have always been resilient - and they believe very strongly in themselves. I didn't sense any kind of - certainly there's disappointment, but people get up off the ground quick around here, and that's what you have to do," Dantonio said. "If you're going to succeed in the next step, then you'd better get your mind right and get back up."

The offensive struggles are nothing new for the Spartans, but even their normally stingy defense has had trouble. Michigan State has allowed at least 30 points in three straight games.

"We've just got to get back to who we are - a fast, physical defense," defensive lineman Kenny Willekes said. "Fly around, and have fun out there."

Last week, Michigan State confirmed three more players had entered the transfer portal, following a few others who had done so earlier in the season. The players in question weren't necessarily playing huge roles, but their decisions added to a sense of gloom.

"It's one of those things that I think is probably here to stay, and you have to deal with it as a head football coach and as a staff," Dantonio said. "You really have to look at recruiting and say, OK, you have a guy that's responsible for the portal. I think that today when I looked at it, there were 344 names in there. So that's a lot of people. Where are all those people going to go? I'm not quite sure.

"As I said earlier, do the best I can and take the high road in this capacity. I appreciate what those guys did for us when they were Spartans."

Dantonio said he will keep moving forward amid any attrition, and he clearly expects the players to do the same.

"You've got to first and foremost have that mentality that you've got to step forward and so that's what we've tried to do here," Dantonio said. "We've maintained a positive approach and we're trying to fix the things that we can fix and change the things we cannot."