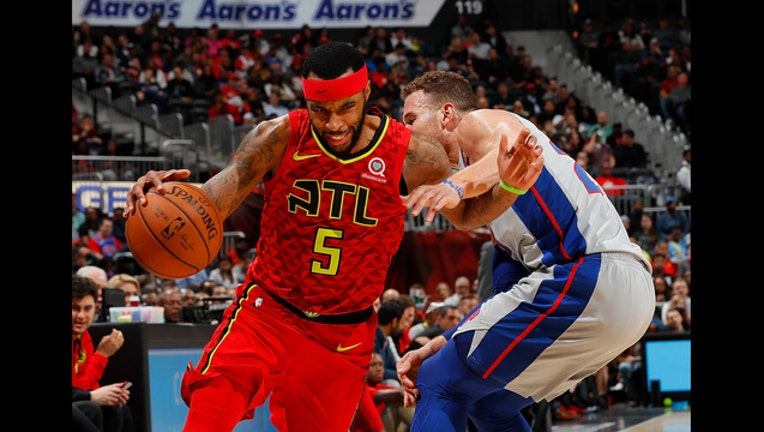 ATLANTA (AP) - Dewayne Dedmon made the most of only his second start in Atlanta's last 18 games, especially at the end.

Dedmon gave Atlanta the lead with a three-point play and then padded the margin with a 3-pointer, lifting the Hawks to a 118-115 win over Blake Griffin and the Pistons on Sunday.

Dedmon matched his career high with 20 points and had 13 rebounds in his matchup with Andre Drummond, who had 25 points and 15 rebounds for Detroit.

The Hawks haven't had a set starting center. Miles Plumlee has seen most of the starts in recent games, and rookie John Collins has four starts.

Dedmon said he was "trying to be aggressive ... just trying to change the game."

He said that's his approach "no matter where it is, starting or coming off bench."

Dedmon's three-point play gave Atlanta a 109-107 lead with 1:34 remaining. Following a missed jumper by Jameer Nelson, Dedmon sank a 3-pointer from the corner in front of the Pistons bench to push the lead to five points.

Dennis Schroder had 23 points for Atlanta, including six free throws in the final 20 seconds.

Griffin, who had 23 points, answered with a 3-pointer for Detroit. Schroder made two free throws for a 114-110 lead. Griffin's layup cut the Atlanta lead to two points before Schroder added two more free throws with 9.2 seconds remaining for a 116-112 advantage.

Anthony Tolliver missed a 3-pointer for Detroit before Schroder iced the win with two more free throws. Griffin added a 3 as the final buzzer sounded.

The Pistons blamed the loss on bad defense.

Drummond's big game was not enough to overcome the defensive breakdowns, including in the closing minutes.

Van Gundy assigned blame for the defensive problems on "our starters, other than Andre."

Pistons: Reggie Bullock had 20 points, two away from his career high. ... James Ennis and Nelson, obtained in trades with Memphis and Chicago, respectively, on Thursday, made their debuts late in the first period. Ennis had 14 points. Nelson had six points and five assists. ... Ish Smith had two points, seven assists and five turnovers. ... Bullock had only two points in the second half.

Hawks: Ilyasova had 19 points. ... After missing the last 18 games with a left groin strain/left abductor strain, DeAndre Bembry was in uniform but did not play. Bembry was arrested early Friday after he was clocked driving 128 mph on an Atlanta interstate. ... Rookie Tyler Dorsey, who had 10 points, saw more playing time off the bench than starting small forward Taurean Prince, who had two points and three turnovers while making only one of seven shots.

Griffin made 3 of 10 3-pointers and then second-guessed his shot selection.

Griffin appeared to be trying to throw the ball to official Michael Smith following a foul call in the second period, but his pass hit Schroder on the back of his head. Schroder, who had been standing close to Smith, objected and the two had a brief exchange before Griffin was called for a technical foul. Griffin's attempt to explain the pass didn't change the call.

Drummond was a difficult matchup for Atlanta, consistently drawing fouls near the basket. Drummond made 9 of 13 free throws and was the major reason Collins and Dedmon had foul problems. Collins fouled out with 3:25 remaining and Dedmon finished with four fouls.