CHICAGO - Max Domi stole the puck from Lucas Raymond and scored 2:16 into overtime, lifting Chicago to a 4-3 victory over the Detroit Red Wings on Friday night in the Blackhawks' home opener.

Andreas Athanasiou, Philipp Kurashev and Connor Murphy also scored for Chicago in its first game in six days. Petr Mrazek made 15 stops before departing with an unspecified injury, and Alex Stalock had 10 saves in the third period and overtime.

Dominik Kubalik had a goal and an assist for Detroit, which dropped its second straight game in overtime. Dylan Larkin and Pius Suter also scored, and Alex Nedeljkovic made 25 saves. 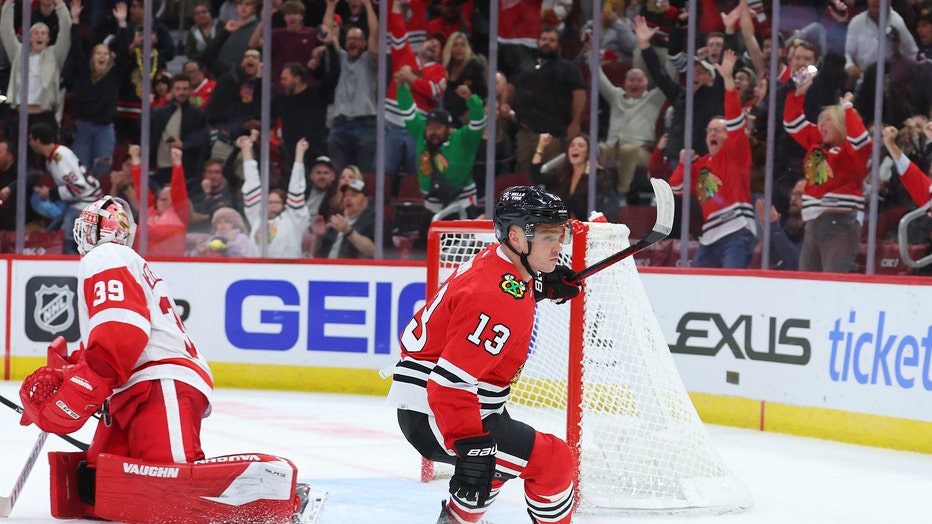 CHICAGO, ILLINOIS - OCTOBER 21: Max Domi #13 of the Chicago Blackhawks celebrates after scoring a game-winning goal in overtime past Alex Nedeljkovic #39 of the Detroit Red Wings at United Center on October 21, 2022 in Chicago, Illinois. (Photo by Mi

It was Kubalik’s first game against Chicago since the forward signed a $5 million, two-year contract with Detroit in July. Kubalik spent his first three NHL seasons with the Blackhawks, getting 62 goals and 54 assists in 202 games.

"The biggest thing about Dominik that I probably didn’t give him enough credit for is how well he skates," Red Wings coach Derek Lalonde said. "Obviously he can finish."

The 27-year-old Kubalik got his second goal with his new team when he tipped Olli Maatta's shot past Mrazek on the goaltender's glove side, making it 3-1 with 8:42 left in the second period.

Athanasiou converted a penalty shot 5:41 into the second for his first goal with his new team. It was the first penalty-shot goal for the Blackhawks since Jonathan Toews got one on March 11, 2019, against Arizona.

Chicago then tied it at 3 with two goals in the third. Kurashev beat Nedeljkovic with a backhand on a rebound at 3:46, and Murphy scored a short-handed goal off a faceoff at 10:06.

Toews and Patrick Kane each got a loud ovation when they were introduced before possibly their last home opener with Chicago. Each of the star forwards is in the last year of his contract and could be moved by the rebuilding Blackhawks at some point this season.

Kane got a good look with about four minutes left in the second, but he shot it off the post.

Detroit jumped in front with two goals 67 seconds apart in the first. Suter scored his first of the season when Robert Hagg's rebound went off his left skate and in, and Larkin added a power-play goal on a wrist shot from the high slot at 10:33.

Larkin departed with an upper-body injury with about seven minutes left in the first, but he returned for the start of the second.

Veteran defenseman Jake McCabe made his season debut for the Blackhawks, replacing Filip Roos in the lineup. The 29-year-old McCabe is coming back from