PHILADELPHIA - Sean Couturier and Scott Laughton each had a goal and an assist and the Philadelphia Flyers beat the Detroit Red Wings 6-1 on Friday for their third straight victory.

Kevin Hayes, Oskar Lindblom, Shayne Gostisbehere and James van Riemsdyk also scored and Jakub Voracek had three assists for Philadelphia. The Flyers haven’t lost in regulation during the regular season to Detroit since Jan. 25, 1997, going 16-0-1 over that stretch.

Robby Fabri scored for the slumping Red Wings. They have lost eight in a row and are an NHL-worst 7-18-3.

Hayes and Lindblom scored 30 seconds apart early in the third period, making it 5-1. Hayes’ goal was of highlight-reel variety, receiving a pass from Laughton through his legs before finishing with a backhander from close range 27 seconds into the third.

Couturier scored his eighth with 11.9 seconds left in the second to make it 3-1. After a pass from Niskanen, Couturier got in all alone on Calvin Pickard and followed up Pickard’s initial save. 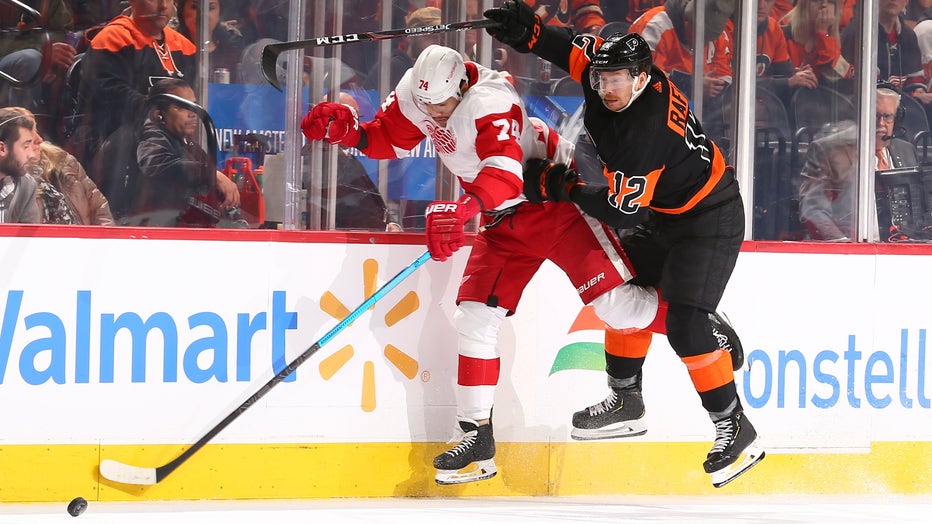 PHILADELPHIA, PA - NOVEMBER 29: Madison Bowey #74 of the Detroit Red Wings battles for the puck against Michael Raffl #12 of the Philadelphia Flyers in the second period at the Wells Fargo Center on November 29, 2019 in Philadelphia, Pennsylvania. (P

Pickard was called up from Grand Rapids of the AHL after Jimmy Howard injured his midsection in Wednesday’s 6-0 home loss to Toronto. Regular backup Jonathan Bernier was in uniform but has been battling flu-like symptoms. Pickard made 28 saves.

Gostisbhere, two seasons removed from a 65-point season, was a healthy scratch the last three games and entered Friday with just six points in 22 games. But he notched his second of the season on the power play with 57.1 seconds left in the first period on a backhander from the left of the crease.

Fabri tied it at 1 with 11:51 left in the first on a slap shot from the top of the left circle, ending a long drought for Detroit. The Red Wings hadn’t scored in 164 minutes, 37 seconds prior to Fabri’s fourth goal in eight games since joining the club in a Nov. 8 trade with St. Louis.

Notes: Detroit D Mike Green returned after missing four straight games with an upper body injury. ... The game was delated for several minutes in the first period to clean the ice of blood from Niskanen after he took a puck off the face. Niskanen returned wearing a full cage mask as a shield. He had a pair of assists. ... Philadelphia improved to 8-1-4 at home.