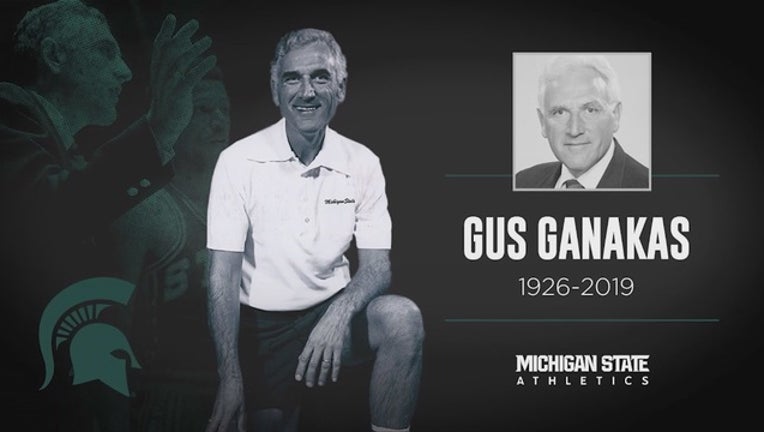 EAST LANSING, Mich. (AP) - Gus Ganakas, who was the coach of Michigan State's men's basketball team from 1969-76 and remained part of the athletic department until his retirement in 2000, has died. He was 92.

"Gus was one of the most selfless and positive people that I've ever been around," said Tom Izzo, the men's basketball program's current coach. "Our thoughts and prayers are with the entire Ganakas family as they grieve their loss."

Ganakas became an assistant coach at Michigan State in 1966. After taking over as head coach three years later, he went 89-84 in seven seasons. Jud Heathcote succeeded him and coached the Spartans to a national title in 1979, with Magic Johnson leading the way.

"You'll learn all you need to about Gus when you look at the way he handled being replaced as head coach," Izzo said in a statement. "Most of us would have wanted our replacement to fail, hoping it would make us look good. But that wasn't who Gus was. Instead, he made sure that the local high school superstar Earvin Johnson knew that Michigan State was still the right place for him to attend and that new coach Jud Heathcote was the right guy to play for. As they say, the rest is history."

Ganakas was an assistant athletic director from 1976-98 and an aide to Izzo from 1998-2000. He also spent over 30 years as one of the voices of Michigan State men's basketball, serving as a color commentator.

Born in Mount Morris, New York, Ganakas earned his bachelor's degree in physical education from Michigan State in 1949 and a master's degree in the same field in 1950. He went to Michigan State after serving in the U.S. Marine Corps during World War II.

Before becoming an assistant basketball coach, Ganakas was the coordinator for the Ralph Young Fund, known today as the Spartan Fund. In 2017, the Michigan State most valuable player award as voted on by the players was named in his honor.

"Gus has helped build the family atmosphere within Michigan State basketball," Izzo said. "The connection between our past and our present is the best of any program in the nation because of Gus. Former Spartans from all eras feel connected to the current team, and much of that credit goes to Gus."