Jarrod Dyson doubled and scored the go-ahead run in the fifth inning and the Royals bullpen preserved another lead, holding off the Detroit Tigers 3-2 Monday to complete a four-game sweep on the road for the first time since 1999.

The Royals, who haven't finished over .500 since winning the 2015 World Series, have won a season-high five straight and own the best record in the American League at 14-7. 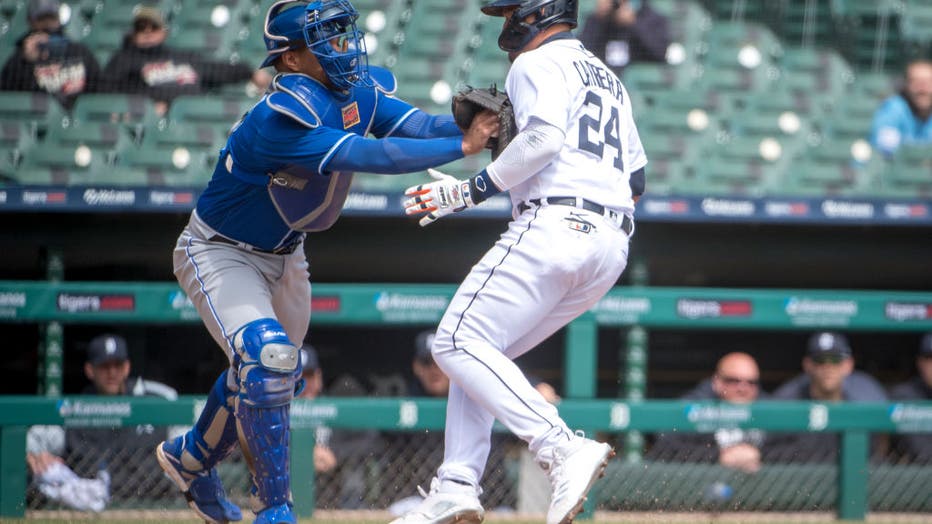 DETROIT, MICHIGAN - APRIL 26: Miguel Cabrera #24 of the Detroit Tigers is tagged out at home by Salvador Perez #13 of the Kansas City Royals during the bottom of the third inning at Comerica Park on April 26, 2021 in Detroit, Michigan. (Photo by Nic

"We won’t talk about it in those terms, I can tell you that," Tigers manager A.J. Hinch said.

"Brad was not feeling it early and he figured out how to grind through it and pitched out of trouble," Matheny said.

Scott Barlow and Greg Holland followed for the Royals, each throwing a scoreless inning. Josh Staumont pitched the ninth for his second save in as many chances, sealing the team's first four-game sweep against Detroit since 2005.

The Royals have won 58 straight games — dating to June 21, 2019 — when ahead after the seventh inning for the longest such streak in baseball.

Spencer Turnbull (1-1) gave up three runs on five hits and no walks while striking out five. Detroit relievers combined to throw three innings of scoreless relief, but its hitters failed to take advantage of chances to extend or win the game, leaving 11 runners on base.

"In a close game like that, you want to take advantage of any opportunity," Hinch said. "We had a lot more opportunities than previous games and that’s encouraging."

In the third inning, the Royals took a 2-0 lead on Carlos Santana's fifth homer of the season.

Miguel Cabrera's RBI in the third ended a 15-inning scoreless stretch for the Tigers and Grayson Greiner's single in the fourth made it 2-all.

"I’m not into silver linings, but I did like the at-bats better," Hinch said.

The last time Kansas City had a four-game sweep on the road was at the Metrodome, topping the Twins in May 1999.

Kansas City catcher Salvador Perez was taken out of the game after the top of the sixth inning with an injured right thumb after tagging Cabrera out on a play at the plate in the third.

"As he applied the tag, it pushed the thumb back a little bit," Matheny said. "It’s going to be a day-to-day thing."

Perez played in his 1,000th game, becoming the 13th Royal and sixth active catcher to reach the milestone.

Kansas City has matched its second-best record after 21 games. In franchise history, the 2003 Royals that started 17-4 are the only team to get off to begin better.

"The last few seasons, we’ve never gotten off to a good start," Keller said. "I truly believe with this team and the fight that we have, we’re really good and we're sneaking up on a lot of teams and we’re surprising a lot of people."

Tigers: Face the Chicago White Sox and RHP Lucas Giolito (1-1) for the first time this season, hoping RHP José Ureña (0-3) can earn his first win since 2018.