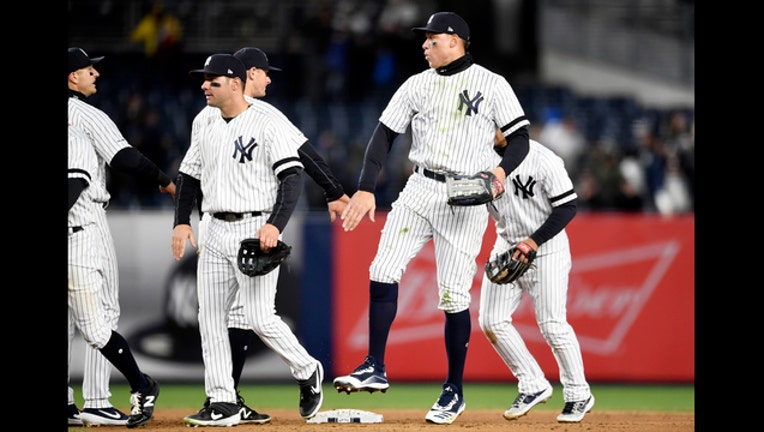 NEW YORK, NEW YORK - APRIL 01: Mike Tauchman #39 and Aaron Judge #99 of the New York Yankees celebrate after winning 3-1 in the game against the Detroit Tigers at Yankee Stadium on April 01, 2019. (Photo by Sarah Stier/Getty Images)

NEW YORK (AP) - Giancarlo Stanton and Miguel Andujar had already joined the Yankees' long injured list when Aaron Judge sprinted into right-center field and made a spectacular, sprawling grab on Niko Goodrum's hard-hit liner to preserve a two-run lead in the eighth inning.

Judge snapped the webbing around the ball as his gloved left hand hit the turf and he slid on his chest, picking up grass stains on both knees before popping up and throwing the ball to second to make sure both runners could not advance.

"That's one of those dangerous plays for an outfielder," New York manager Aaron Boone said Monday night after Judge preserved a 3-1 win over the punchless Detroit Tigers. "It's hard for them to sometimes get underneath that ball to make the play and not hurt themselves. I felt like I saw it pretty well and I felt like I knew he was fine, but definitely one of those that you kind of hold your breath on."

Domingo German (1-0) pitched one-hit ball over five innings to overcome five walks on a chilly night and win for the first time since last June. Gary Sanchez and Brett Gardner homered for the banged-up Yankees off Tyson Ross (0-1).

New York said before the game that outfielder Giancarlo Stanton strained his left biceps Sunday and third baseman Miguel Andujar injured his right shoulder. His torn labrum will be treated conservatively for a few weeks but could require surgery if it does not respond.

They joined a group of sidelined Yankees that includes pitchers Luis Severino, Dellin Betances, Jordan Montgomery and Ben Heller, shortstop Didi Gregorius and outfielder Jacoby Ellsbury; pitcher CC Sabathia is set to be added to the injured list Wednesday, after he completes a suspension for hitting a batter with a pitch last September.

After dropping to 1-2 with a pair of losses to Baltimore, New York led 3-1 when Adam Ottavino walked the first two batters in the eighth. Goodrum hit a sinking line drive and Judge decided to go for the catch rather than play the ball on a hop, knowing the topspin could have caused it to land in front of him and bounce by for a two-run extra-base hit.

"I told Gardy right before that play," he said of center fielder Brett Gardner, "that I was going to dive and make a play right there. ... Just watching swings throughout the game. ... I was just letting Gardy know, heads up there."

German has been plugged into the rotation like grout between tiles. Boone wasn't even sure Sunday whether the 26-year-old right-hander would start, or a relief pitcher as an opener would take the mound.

German induced 16 swings and misses among 79 pitches on a raw night with a 45-degree temperature at game time and a cold wind. He struck out seven and walked five, and the only run off him was unearned. He made 14 starts and seven relief appearances last year, when he entered the rotation after Montgomery tore an elbow ligament, and German's only previous big league wins came in starts against Tampa Bay and Seattle last June 14 and 19.

Chad Green, Zack Britton, Ottavino and Aroldis Chapman each pitched an inning to finish the two-hitter. Chapman needed just eight pitches, all fastballs, for his first save and his velocity was back to 97-98 mph after dipping to 95 mph in last week's opener. New York got back to .500 at 2-2 after consecutive losses to lowly Baltimore.

Detroit arrived after a four-game split at Toronto in which the Tigers scored six runs. Jordy Mercer had both hits for the Tigers, who are batting .140 with one home run. He singled in the fourth and doubled in the seventh.

"It was really cold out there," Tigers manager Ron Gardenhire said. "A tough night, but I thought we competed very well and we had our chance."

Ross gave up three runs - two earned - four hits and four walks in five innings. He was done in with a pair of pitches that missed high, with Sanchez hitting a 417-foot drive to center in the second to go deep for the second straight day and Gardner hitting his first of the year in the fifth.

"Sanchez, I threw a cutter that spun," Ross said. "A 3-2 to Gardner, I threw a fastball top of the zone and he did a good job staying on top of it."

New York scored its second run in the third when Greg Bird's one-hop, opposite-field single glanced off the glove of Christin Stewart and bounced behind the left fielder. Slow-footed Luke Voit sprinted home from first and slid home ahead of the relay throw.

Detroit scored in the fourth when German bounced a wild pitch with two on and Sanchez was charged with an error for the third straight day when his catchable throw sailed by the glove of second baseman Gleyber Torres.

Detroit flew to Albany, New York, on Sunday night to go through U.S. customs, then continued to Newark, New Jersey.

Mike Tauchman, acquired from Colorado on March 23, got his first start for New York, taking over for Stanton in left field. Tauchman went 0 for 3.

Detroit RHP Jordan Zimmermann (0-0) starts Tuesday. He was perfect for 6 2/3 innings against Toronto last Thursday before Teoscar Hernandez's single, the longest perfect-game bid in a season opener since Boston's Lefty Grove in 1940, according to the Elias Sports Bureau. Zimmermann allowed one hit in seven innings and did not get a decision. RHP Masahiro Tanaka (1-0) starts for the Yankees after beating Baltimore on opening day.