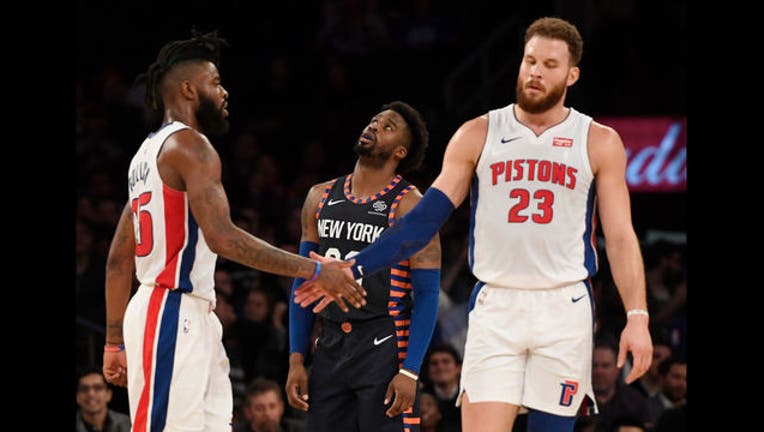 NEW YORK, NEW YORK - FEBRUARY 05: Wesley Matthews #23 of the New York Knicks reacts during the third quarter of the game against the Detroit Pistons at Madison Square Garden on February 05, 2019. (Photo by Sarah Stier/Getty Images)

NEW YORK (AP) - All the roster changes aren't helping the New York Knicks get any wins.

Blake Griffin scored 29 points and Andre Drummond finished with 17 points and 16 rebounds as the Detroit Pistons handed the Knicks their 14th straight loss, 105-92 on Tuesday night.

"The second night of a back-to-back, obviously coming off a big win (against Denver) and we got a lot of momentum, too," Griffin said. "It's important to come out and not take any team lightly and come out and just execute, let our execution take care of the game for us."

Reggie Bullock and Reggie Jackson each added 19 points for the Pistons.

Newcomers Dennis Smith Jr., DeAndre Jordan and Wesley Mathews, who were acquired from Dallas in the Kristaps Porzingis trade last Thursday, all started for the Knicks in their second game with the team.

"I want to see how it all looks together. These guys could wind up being a part of our future," Knicks coach David Fizdale said. "I'm trying to give them the early minutes now so that they can catch up and learn our stuff pretty fast."

Mitchell Robinson added 13 points and 10 rebounds, and Kevin Knox scored 11 points for the Knicks who haven't won since Jan. 4 against the Lakers in Los Angeles. Their last win at home was a 136-134 overtime victory against Milwaukee on Dec. 1.

Griffin scored 14 points in the first quarter as the Pistons, who never trailed, led by as many as 12.

The Knicks pulled to 43-42 on Allonzo Trier's layup with 8:07 left in the second quarter. However, Detroit scored the next six points and pushed its lead to 63-54 at halftime.

New York pulled to 70-67 on Smith's 3-pointer midway through the third, but the Knicks still trailed 78-71 heading into the fourth.

"We bounced back in the second half with a defensive mindset that held them to 17 points in the third quarter and 21 in the fourth," Pistons coach Dwane Casey said. "Every game is going to be an adventure, a challenge for us. We can't take anybody in this league for granted."

Damyean Dotson's 3 got the Knicks within three with 7:52 remaining. However, Detroit scored the next eight points and went on to take a game-high 14-point lead at 100-86 on Jackson's two free throws with just under two minutes remaining.

"You just got to look at the grand scheme of things," Smith said. "There's beauty in the struggle and ugliness in the success. You got to take it day-by-day"

Pistons: Jackson is the only Pistons player to appear in and start in each of the team's 53 games. ... The Pistons have beaten the Knicks five straight and lead the all-time series 207-172.

Knicks: The losing streak is their longest since 2014-15 when they dropped a team-record 16 straight and finished 17-65. ... Noah Vonleh is the only Knicks player to appear in all 53 of their games this season.

Knox, the Knicks' lottery pick, has started 26 games during his rookie campaign. New York has gone 2-24 in those games. Named NBA Eastern Conference Rookie of the Month in December, Knox has connected on just 32.8 percent of his shots (44 of 134) since Jan. 17.

The teams opened a home-and-home set with the next game Friday in Detroit. The Pistons have met the same team in back-to-back games twice so far this season, losing both to the Celtics (Oct. 27 and 30) and splitting with the Rockets (Nov. 21 and 23). The Knicks have played only one such series this season, losing to the Bucks on Dec. 25 and 27.

Knicks: At Detroit on Friday night.