ANN ARBOR, Mich. - Jim Harbaugh’s job is safe at Michigan whether his team finally beats Ohio State or he falls to 0-5 in what has become a one-sided series.

But a victory over Ohio State on Saturday at the Big House on FOX 2 would sure provide a boost for Harbaugh and college football’s winningest program - even if he won’t say it.

It would also be a surprising upset. 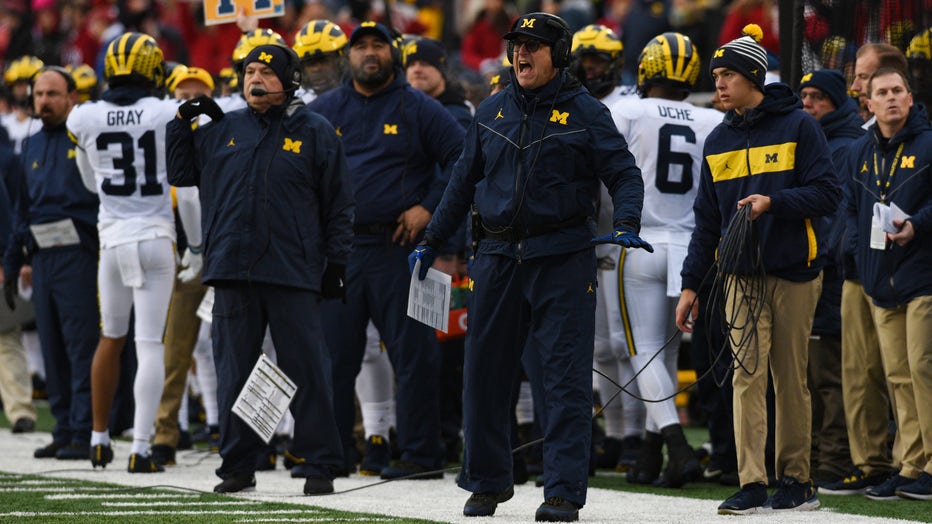 BLOOMINGTON, IN - NOVEMBER 23: Michigan head coach Jim Harbaugh during a college football game between the Michigan Wolverines and Indiana Hoosiers on November 23, 2019, at Memorial Stadium in Bloomington, IN.(Photo by James Black/Icon Sportswire via

After the Buckeyes poached a pair of Harbaugh’s coaches to work for first-year coach Ryan Day last winter, Harbaugh made a major move of his own that is starting to pan out.

Harbaugh hired former Alabama assistant Josh Gattis to be his offensive coordinator a year after Michigan didn’t have an assistant with that job. He has allowed Gattis to call plays in a no-huddle spread offense that is clicking well enough - finally - for the Wolverines to average nearly six touchdowns over the last four games.

If Harbaugh can help the Wolverines win a fifth straight game with their first victory over Ohio State since 2004, it might prove to be as pivotal moment for the program as it was 50 years ago when Bo Schembechler beat one of Woody Hayes’ best teams.

Harbaugh seemed at ease Monday at his weekly news conference. He didn’t guarantee a victory over the Buckeyes as a did as Schembechler’s quarterback in 1986, a boast he helped to back up with a 26-24 win at the Horseshoe, but did say a win would be very significant.

Harbaugh, who is 47-16 with the Wolverines, is in the fifth year of a seven-year contract with a compensation package that gives him more than $7 million per year. He returned in 2015 to the school where he was a star after going 44-19-1 with the 49ers, winning the 2012 NFC championship.

He was hailed as the coach who could restore glory at Michigan. Averaging nearly 10 wins a season without a victory over Ohio State has toned down the hype about what he could do at a school without a Big Ten title since 2004 or a national championship since 1997.

For the first time, Harbaugh won’t have to try to close the regular season with a win over Urban Meyer.

Meyer, who retired after last season, made the Michigan game a huge deal within the program and backed up his priority by dominating its rival. Like Meyer, Day has made it clear how important preparing to play and beat the Wolverines is to him.

“We live it every day, the Team Up North is something that we talk about every single day,” Day said Saturday after a 28-17 win over Penn State. “And the best way to respect a rivalry is to work it every day and we do.”

Day kicked the rivalry up a notch last winter, hiring assistants Greg Mattison and Al Washington away from the Wolverines on consecutive days.

Harbaugh dodged a question about facing his former assistants, and his players insisted they don’t have hard feelings about the coaches, both of whom were given big raises to join the Buckeyes.

Ohio State senior receiver K.J. Hill said from the moment he stepped on campus, the Wolverines have provided motivation.