WICHITA, Kan. - WICHITA, Kan. (AP) — Naz Hillmon had 17 points and 10 rebounds and Laila Phelia scored the go-ahead layup in the final minute for No. 3 Michigan, which beat No. 10 seed South Dakota 52-49 on Saturday night to reach the Elite Eight for the first time.

Michigan will play No. 1 seed Louisville on Monday with a trip to the Final Four at stake. Louisville defeated No. 4 seed Tennessee 76-64 earlier in the day.

South Dakota (29-6) was trying to become just the fifth double-digit seed to reach the Elite Eight, but fell short. Hannah Sjerven had 17 points and eight rebounds before fouling out, while Chloe Lamb, the Summit League Player of the Year who averaged 16 points per game, was held to just six points.

With the crowd overwhelmingly on its side, the Coyotes held the Wolverines without a field goal for 3:40 to start the game, and led for much of the first half. 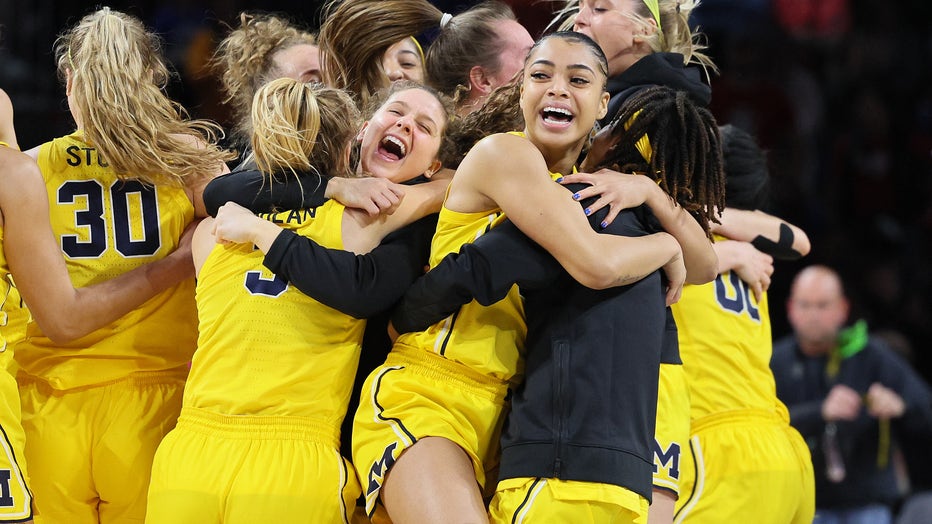 WICHITA, KANSAS - MARCH 26:The Michigan Wolverines celebrate after their 52-49 win against the South Dakota Coyotes in the Sweet 16 round of the NCAA Women's Basketball Tournament at Intrust Bank Arena on March 26, 2022 in Wichita, Kansas. (Photo by

Back-to-back 3-pointers by Grace Larkins put the Coyotes ahead 25-23 in the second quarter, and they led 26-24 at the break thanks to 11 points from Sjerven. Phelia, who had averaged just under nine points per game for the season, scored 12 in the first half to keep Michigan in the game.

Michigan took a 39-38 lead into the fourth quarter, with Hillmon scoring nine points in the third.

A mid-range jumper by Lamb rattled in to tie the game at 48 with 48.5 seconds remaining.

Phelia made a layup with 22 seconds remaining, and Brown later made two free throws to put the Wolverines up by four.

South Dakota's Maddie Krull made the first of two free throws to cut Michigan's lead to 52-49 with 7.5 seconds left. But she missed the second free throw, and there was a scramble for the ball before it went out of bounds. It wasn't immediately clear who the ball last touched, but South Dakota got it after the referees' review.

The Coyotes couldn't get a clean look, with Kyah Watson missing a 3 as time expired.

South Dakota: Lamb, Sjerven and Liv Korngable are super-seniors who came back to make a run. They did that, nearly propelling the Coyotes to the Elite Eight for the first time. The other two starters are freshmen. With that foundation and the support the Coyotes received along the way, the program appears to be in good hands.

Michigan: The Wolverines got off to a rough start in what was essentially a road environment and scraped out a win despite Hillmon going scoreless in the first quarter.