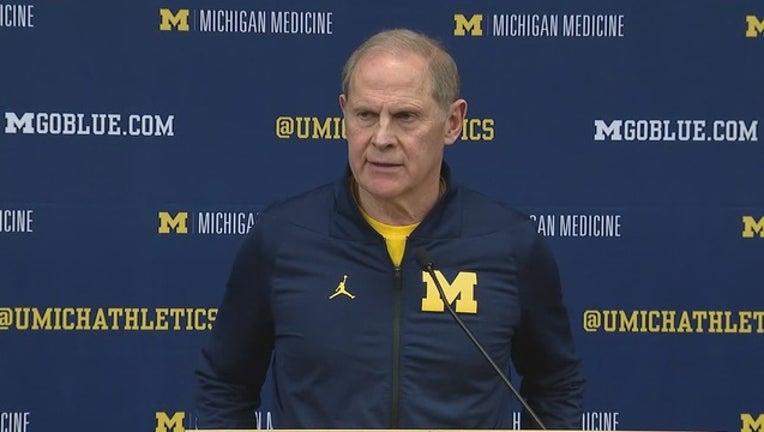 ANAHEIM, Calif. (AP) - From the palm trees outside to the big men inside, the Western portion of the Sweet 16 looks strikingly familiar.

Michigan's the only team that would like for it to end the same as last year.

The Wolverines, along with Gonzaga and Florida State, are returning to Southern California - this time in Orange County instead of Los Angeles - for a near repeat of the 2018 West regional semifinals.

The Bulldogs and Seminoles are set for a Sweet 16 rematch Thursday; Florida State won last year's game 75-60. Michigan plays the only newcomer to this year's West bracket, Texas Tech. The Red Raiders were one win away from the Final Four last year, but they played in the East. (Last year's fourth team in the West, by the way: Texas A&M)

What else has changed?

Well, while the roster might look very similar for the fourth-seeded Seminoles (29-7) - they bring seven of the 10 players back from last year's rotation - they come into this weekend bonded by tragedy. Mike Cofer, the former NFL linebacker and the father of FSU forward Phil Cofer, died last week after a long bout with a rare organ disease.

"When you're dealing with things like these, you never know exactly what's the right thing to do," coach Leonard Hamilton said.

The Gonzaga team that Florida State faces will have a more imposing look than last year.

Brandon Clarke has joined Rui Hachimura to give the top-seeded Bulldogs (32-3) two NBA-quality big men in the frontcourt. Last year, forward Killian Tillie went down with a hip injury during practice for the regional semifinal. This year, he's ready to go.

"I feel like this team is kind of built better to play teams that are more physical and with bigger size than we were last year," Clarke said.

Then again, Florida State is a lanky, athletic team - its leading scorer and second-leading rebounder, Mfiondu Kabengele, comes off the bench - that's used to facing pro talent. The Seminoles go against Duke and North Carolina once or twice each season in the Atlantic Coast Conference.

"We share the ball and we hold each other accountable from an effort standpoint," Hamilton said. "And that's the best way we feel we can compete in the conference where you have what you call a lot of 'blue bloods.'"

BET THE UNDER: Second-seeded Michigan (30-6) gave up the second-fewest points in Division I this season. Third-seeded Texas Tech (28-6) gave up the third-fewest. Texas Tech leads the nation in defensive efficiency (giving up 85.5 points for every 100 possessions). Michigan is ranked second (86 per 100). Get the picture? The over-under on this game is 126, meaning the first team to 65 will probably win.

WIZARD OF WASHINGTON: With the instant name recognition that comes with 21 straight trips to the NCAA Tournament and five straight trips to the Sweet 16, Gonzaga has become the West Coast's premier power in college hoops. And so, its coach, Mark Few, is this generation's John Wooden, Hamilton insists.

But Few isn't stepping in it. His response when presented with the comparison: "That might be the greatest exaggeration of all time."

WALL OF FAME: Some coaches put pictures of Vince Lombardi up on their wall. For others, it's Wooden. Texas Tech coach Chris Beard insists that if he did that sort of thing, the likeness of Michigan's John Beilein would be hanging in his office. Like Beilein, Beard knows a thing or two about working his way up the ranks. Both coaches spent ample time in community college, junior college and small NCAA schools before making it to the big time.

"I'm proud of my background in small college basketball," Beard said, "and Coach (Beilein) is somebody we all look up to in coaching because of his experience and success at different levels."

Beilein on coaching in the small schools vs. coaching at Michigan: "The biggest difference is, you get to lose when nobody cares."

STAT OF THE YEAR: Clarke leads the nation in blocks and shoots 69.9 percent from the floor. Run the numbers, and he's got more blocks (110) than missed shots (105) this year.