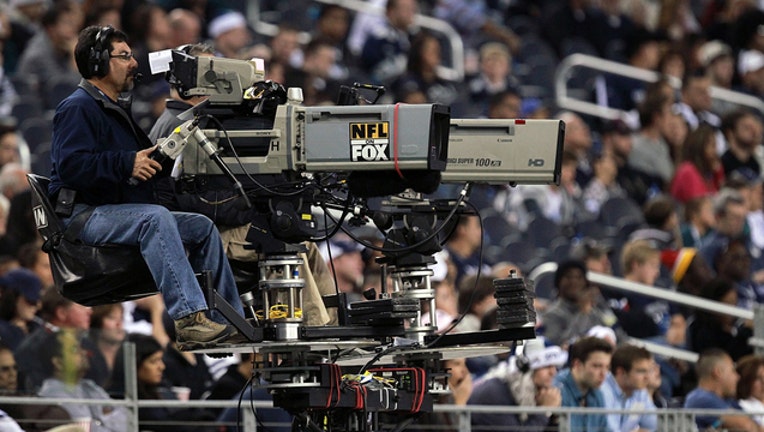 A camera operator for NFL on Fox at Cowboys Stadium on December 24, 2011 in Arlington, Texas. (Photo by Ronald Martinez/Getty Images)

(AP) - Terry Bradshaw thought his career as a football analyst was over in 1993 when CBS lost the NFL rights to Fox. But instead of going back to cattle ranching, he has had a front-row seat to the biggest sports broadcasting startup of the past quarter-century.

"It seems like an eternity. We all have occasionally talked about where we started. We've had all of these innovations that has transformed broadcasting on television," Bradshaw said.

It was Bradshaw who helped usher in Fox's coverage of the NFL in 1994 riding a horse around Los Angeles before arriving at the Fox set in Hollywood. That entrance helped set the tone that still drives the network's coverage and has included eight Super Bowls.

"Terry is what Fox attitude is all about," said Joe Buck, who has gone from one of the announcers for regional games to the voice of Fox's major properties. "They played that during the preseason seminar this year and I got choked up. It was a beautiful TV moment."

David Hill, who built Fox Sports and came up with many of its innovations, still considers Bradshaw his most important hire.

"He is the core of what Fox Sports is — he's funny, self-deprecating, but gets the job done," Hill said.

That core was put in motion 25 years ago this month when Fox won the rights to broadcast NFL games for $1.6 billion over four years. Besides its personalities, the network has given us the scorebox, audio that brings viewers closer to the game, the one-hour pregame show, and a big production feel for sporting events.

The fact that Hill was able to build a sports division from scratch in eight months remains incredible considering most networks now take two to three years to build.

"It was so intense that it stays with you. Thinking back, though, we never had a chance to second guess anything because every day was important," he said.

Many of the announcers and production personnel that started with Fox in 1994 are still there as the network is in its 25th season of broadcasting the NFL. Bart Simpson is still going strong on Sunday night's, but Fox has become a grown-up network.

"We've grown from the rebellious new kid on the block and are now looked at as a responsible producer of major sports. We're now the establishment," said Richie Zyontz, the lead producer for Fox's top NFL game as well as coordinating producer for the network's NASCAR coverage.

The NFL's decision to go with Fox continues to reverberate on a number of levels, not only with football but in the way sports rights costs are perceived among network executives. Among the things we have learned:

Fox's credo of "same game, new attitude" really applied to Hill. The affable Australian, who had built sports networks in England and Australia, was tasked with building Fox Sports in eight months.

Hill offered a fresh set of eyes when it came to evaluating pro football on television, and the first opinion he had is there wasn't enough fun or entertainment on Sunday broadcasts.

Hill's vision of Fox's philosophy took root with the pregame show. Not only was it an hour, but it was done in Los Angeles instead of New York. He had a simple formula for his pregame crew: a host, former offensive player, former defensive player and coach.

"David understood that he wanted the viewer entertained. We cover the news but we tend to do things a little more jovial," Bradshaw said.

Hill, who now runs his own production company after leaving Fox in 2015, liked Howie Long after seeing one of his interviews, but wasn't sold after an audition. It was so vanilla that Hill told Long to come back the next day with a different attitude. Long was more relaxed in the second audition and was hired.

Bradshaw and Long have been the backbone of Fox's pregame show despite their diverse personalities.

"Terry and I couldn't be more different, but we have caught lightning in a bottle. It just works," Long said.

Hill also suggested having a comedian do predictions and having a weather report as a segment. The Los Angeles setting also gave the show a different vibe, which is what he wanted all along.

"All the cameramen for the pregame had worked on sitcoms during the week. They all wanted to work on football," he said. "The camaraderie of everyone flowed throughout the entire unit."

The pregame show was a hit from the beginning and also showed that viewers had an appetite to consume as much football content as possible.

"I remember opening weekend when I got home I had a couple college buddies that were raving about the pregame show and how great and fun it was with everyone," said Troy Aikman, who was Cowboys quarterback in 1994 before joining the network seven years later. "It was refreshing, new and unique, and that set the tone for the network."

"I was sitting in the room during a seminar and looking at Summerall, Madden, Dick Stockton and Matt Millen while listening to David Hill talk, and I couldn't believe I was in the same room," Buck said. "I had been around my dad (Hall of Fame broadcaster Jack Buck) and knew what the standard was and how it had been done, and now I was hearing how different things were going to be. It was intimidating and exciting."

Production-wise, Fox ushered in the era of the constant time and scorebox along with audio that brought viewers closer to the action. The scorebox may look like a simple graphic, but at the time it was a technical marvel. Instead of having a camera fixated on a clock, a black box was embedded in each scoreboard so that the time and other data could be transmitted to Los Angeles and production trucks at the stadium.

"There was a guy named Richard Flanigan who had to go to each stadium with a ladder and screwdriver and put the black box in each scoreboard. But he had to build a black box for each scoreboard because they were all different," said Eric Shanks, a broadcast associate in 1994 and now Fox Sports' executive producer and CEO. "The attitude from David was the bigger, the louder, the better. We were doing things with graphics and sound effects that only used to exist in big production movies."

When the NFL entered television negotiations in 1993, many predicted it would be lucky to get near the $3.6 billion received from ABC, CBS, NBC, TNT and ESPN for four years in 1990.

Fox's bid of $1.58 billion, along with increases from ABC, NBC, TNT and ESPN, increased the rights fees to $4.4 billion — and longtime NFL broadcast partner CBS lost the NFC rights to Fox.

The contracts also ended up benefiting the players. The salary cap started in 1994 and many predicted with decreased rights fees it would be $32 million per team. However, the surprise influx of cash pushed it to $34 million.

The NFL received roughly $5.525 billion this season for television rights, including $1.760 billion from Fox for Sunday and Thursday games. The salary cap for this season is $177.2 million per team.

Most networks lose money on sports rights deals, but you rarely hear executives discuss that because the loss of the NFL can be catastrophic to the bottom line. CBS experienced that in 1993 when it lost the NFC games to Fox and NBC learned those lessons four years later when CBS outbid it for rights to the AFC.

Not only does it decimate sports divisions, but it impacts promotion of prime-time programming.

"Four years later the negative impact was so severe that CBS went to the NFL and said. 'name your price and we'll pay whatever to get a package,' " said Neal Pilson, the former president of CBS Sports who now runs his own sports television consulting company. "We lost affiliates, ratings, the male audience and a lot of sports sponsorships. But when CBS got the NFL back (in 1997), everything picked up again."