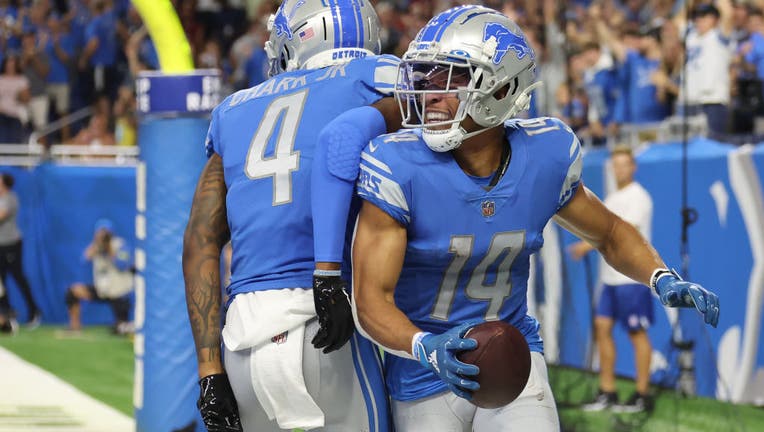 DETROIT (FOX 2) - After the first two weeks of the NFL season, there are three teams who have scored more points than every other team: The Buffalo Bills, the Kansas City Chiefs, and the Detroit Lions.

The offense, behind the legs of D’Andre Swift and the hands of Amon-Ra St. Brown, has scored 71 points, tied for Kansas City for second-most in the NFL, just one point behind the Bills.

The Lions are explosive. Swift and company are leading the league in yards-per-carry at 7.2. The Saints are second at 6.4. And second-year head coach Dan Campbell said the offense, which ran the ball 24 times for 191 yards in the 36-27 victory over the Washington Commanders, was the key.

St. Brown is tied for second in the league with three touchdowns, behind only Stefon Diggs who scored three on Monday night. On Sunday alone, St. Brown had 116 yards and two touchdowns and, dating back to last year, has caught a touchdown in six straight games - the third player in league history to do so at the age of 22 or young. The other two are Randy Moss and Rob Gronkowski.

His streak of six straight games with eight or more receptions and a touchdown is a league record.

Campbell credits Swift and St. Brown for carrying the water on offense.

"Those two guys are pretty dynamic players for us."

But it's not all good news. The Lions played well in the first half last week but faltered in the second, allowing a touchdown just five plays into the third quarter.

The defense has allowed an astounding 32.5 pointers per game after two weeks, the second most in the NFL. This despite No. 2 pick in the NFL Draft Aidan Hutchinson having three sacks in the first half.

Detroit will look to its offense again to score against the stingy Minnesota defense this Sunday. The Vikings have allowed just 15.5 points per game, the 6th fewest in the NFL. But the offense has scored the 8th fewest points in the league - something that could benefit both the offense and defense for Detroit this weekend.

It will be the first road test of the season for the Lions after opening with back-to-back home games to start the season.

How to watch: In Detroit, you can watch the entire game on FOX 2. If you're outside the Detroit area, you can catch it on all FOX throughout Michigan; You can stream it on the NFL app and NFL Network. NFL rules prohibit FOX 2 from streaming the game so, as much as we'd LOVE to stream the games here, we can't. Sorry.

Coverage for the game will start at 10:00 a.m. on FOX 2 with Lions Gameday Live! Dan Miller, Jennifer Hammond, and our other contributors will be live at U.S. Bank Stadium for a preview of the game.

You can watch the pregame and on the player here: