Detroit Lions defensive end Aidan Hutchinson said he was playing Sunday for a 5-year-old boy from his hometown of Plymouth who just began a battle with leukemia.

The rookie Lion said he's dedicated the game to a 5-year-old boy who just got a devastating diagnosis.

"I think this game was dedicated to, right here actually, Hudson. I had him on my wrist tape. He’s a kid who just got diagnosed with leukemia. He’s actually from my hometown. So, I just had him on my wrist. I think a lot of that was I was playing for him," Hutchinson said. "I just play football. That’s all I do. There’s a lot more people with a lot worse things going on in the world so I’m just trying to make an impact. That’s all."

Hudson was diagnosed with the blood cancer two weeks ago. 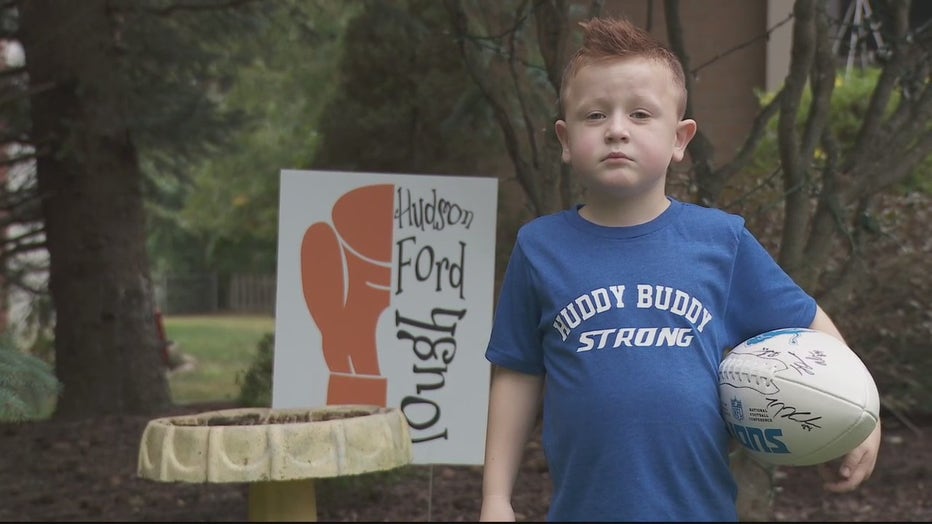 "It means more than I think anyone could realize," his mother Emily Gazsi said of Hutchinson's decision to have her son's name on his wrist.

What makes it even more special is that the family is diehard Lions fans.

The Gazsis were connected to Hutchinson through a family-friend.

"Thank you for helping my family and me," Hudson said.

"It’s taken a toll on all of us in the sense of we feel very spread thin. I guess would probably be the best way to describe it, but I can’t emphasize enough how much support we have had and how blessed and thankful we are," she said.

Emily Gazsi has a message for other families.

"My biggest advice or what I want people to know is if something isn’t right with your child, advocate for them. We had two urgent care visits. We thought Hudson just had a sprained ankle and his fever was kind of a fluke," she said. "If you think there’s something wrong, push for a blood draw, push for a finger poke."

The family said it plans to help some proceeds from a GoFundMe and T-shirt sales to help other pediatric cancer patients.