"We’re just staying patient," Seider said. "We’re a little bit up and down, but we just trust our system in the end will definitely work out, and I think you saw a little bit today."

Emil Bemstrom scored for Columbus, and Joonas Korpisalo had 31 saves. 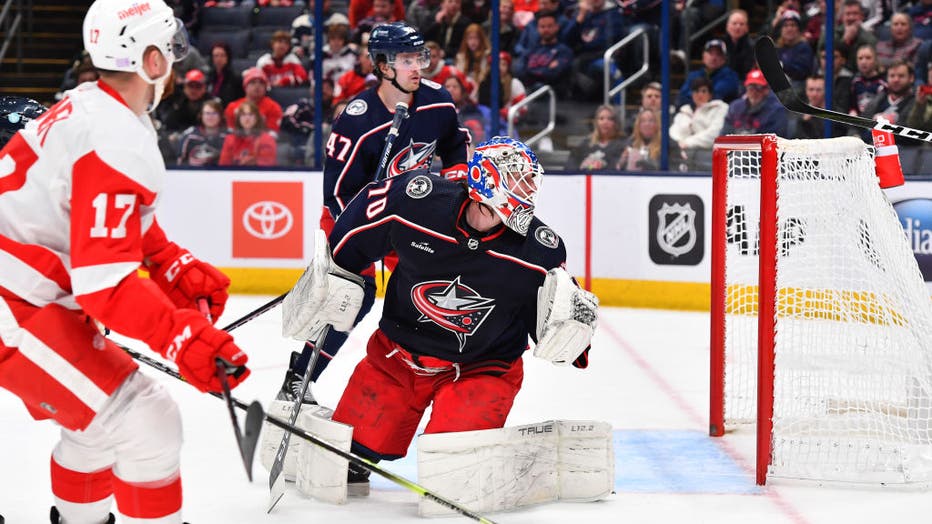 COLUMBUS, OHIO - NOVEMBER 19: Filip Hronek #17 of the Detroit Red Wings scores a goal during the second period of a game against the Columbus Blue Jackets at Nationwide Arena on November 19, 2022 in Columbus, Ohio. (Photo by Ben Jackson/NHLI via Gett

Larkin scored at 9:58 of the first on a Red Wings power-play before Bemstrom pulled Columbus even 43 seconds into the second.

It was all Red Wings after that.

Hronek made it 2-1 burying a Columbus turnover coughed up in front of Korpisalo and Chiarot added a goal with a shot from the blueline at 10:45.

Hronek gave Detroit a three-goal lead with his second of the period with just under 3 minutes remaining.

"He’s keeping his game simple," Red Wings coach Derek Lalonde said. "What I like, he got beat on the first goal against, something he hasn’t done all year, a 1-on-1 play, and he took it personal and got his game going."

Kubalik then put the Red Wings up 5-1 with a one-timer 32 seconds into a power player at 5:21 of the third period before Bertuzzi capped the scoring at 9:04.

"We were fine for a period and a bit," Blue Jackets coach Brad Larsen said. "We started to force things that weren’t there, and it can go bad real quick. We’ve got to clean that up."

Raymond and Seider both played in their 100th NHL game and made the most of the moment, contributing five assists between them — three for Seider and two for Raymond.

Columbus’ Jack Roslovic missed the game with illness and was replaced by Brendan Gaunce. The Blue Jackets recalled defenseman Billy Sweezey from Cleveland of the AHL.

"They did exactly what they wanted to do this building tonight." — Blue Jackets’ Erik Gudbranson on the Red Wings.