CLEVELAND - Cal Quantrill kept Miguel Cabrera in the ballpark as he nears 500 home runs and shut down the rest of Detroit's lineup for seven innings, leading the Cleveland Indians to a 6-1 victory over the Tigers on Friday night.

Quantrill (3-2) struck out a career-high 10 and gave up four singles. He retired 15 in a row after allowing a pair of back-to-back hits in the first inning.

Blake Parker gave up a run to the Tigers in the ninth before Emmanuel Clase came on with the bases loaded and struck out two for his 15th save.

Bobby Bradley hit a two-run double off Matt Manning (2-5) as the Indians prevented the improved Tigers from jumping them into second place in the AL Central. 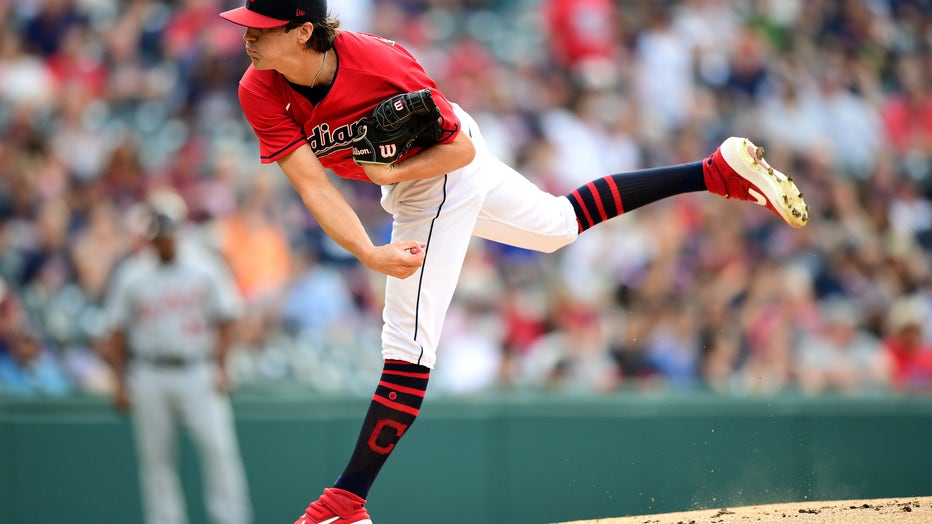 CLEVELAND, OHIO - AUGUST 06: Cal Quantrill #47 of the Cleveland Indians pitches in the first inning during their game against the Detroit Tigers at Progressive Field on August 06, 2021 in Cleveland, Ohio. (Photo by Emilee Chinn/Getty Images)

Cabrera went 1 for 3 with a walk and remained at 498 career homers, two shy of becoming the 28th player to reach the hallowed milestone. Cabrera has homered 50 times against the Indians — his most against any team.

The Indians also got runs in the inning on Myles Straw’s RBI single and Amed Rosario’s forceout.

Bradley injured his left knee at some point and was replaced in the fifth inning. The team said his status will be updated later.

Cleveland added two more runs in the fourth when the Indians won a managerial video challenge overturning a catch by Tigers right fielder Victor Reyes that was initially ruled an inning-ending double play.

Indians third baseman Ernie Clement made a nice play behind Quantrill in the third, snagging Derek Hill's grounder behind the bag and making a long, off-balance throw across the diamond to Bradley, who helped with a stretch.

Shane Bieber's smile said it all.

Cleveland's ace was pleased with a throwing session in the outfield before the game, a sign of progress during a slower-than-expected recovery from a shoulder strain.

The AL's defending Cy Young winner threw comfortably from 90 feet before unleashing a couple after moving up to 60 feet. Bieber was encouraged by the session and remains hopeful he'll pitch again this season.

"I’m sure you can tell that I’m excited and want to come back as soon as possible," he said.

Shortly before the first pitch, the Indians placed catcher Roberto Pérez on the 10-day injured list with right shoulder inflammation.

Wilson Ramos was brought up from Triple-A Columbus. He signed a minor league contract with with Cleveland in July. The 33-year-old began the season with Detroit before being released in June.

Tigers: LHP Matthew Boyd (left arm discomfort) is scheduled to throw live batting practice this weekend in Lakeland, Florida. As long as there are no setbacks, he'll likely go on a two-start rehab assignment in the minors. ... INF/OF Niko Goodrum (bruised calf) will play this weekend at Triple-A Toledo before joining the Tigers next week in Baltimore.

Indians: RHP Aaron Civale (sprained finger) had a "good" bullpen session Thursday as he eyes a return this season. Civale's workout included breaks to replicate actual innings. He's been out since June 22, when he was 10-2.

Detroit's Tyler Alexander (1-1, 4.77) starts the second game of the series Saturday against Indians rookie Eli Morgan (1-3, 6.75), who struck out nine in six innings against Toronto in his previous start.