Josh Hart had 14 points and 13 rebounds, and Nickeil Alexander-Walker also scored 14 for the Pelicans, who've showed signs of improvement in recent weeks while awaiting star forward Zion Williamson's return from an offseason foot fracture. Since starting 1-12, New Orleans has won seven of 15 games.

Trey Lyles scored 18 on 7-of-8 shooting and rookie Cade Cunningham added 16 points for Detroit, which missed 19 of 24 shots in the third quarter while being outscored 29-12. 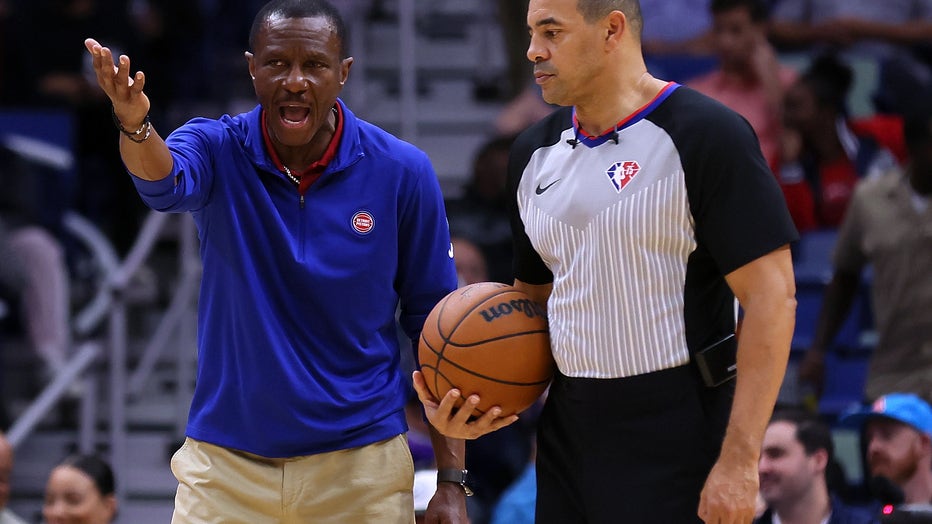 NEW ORLEANS, LOUISIANA - DECEMBER 10: Head coach Dwane Casey of the Detroit Pistons talks to an official during the second half against the New Orleans Pelicans at the Smoothie King Center on December 10, 2021 in New Orleans, Louisiana. NOTE TO USER:

With both clubs struggling early this season, the Pistons opened the game seemingly sensing that their stop in the Big Easy represented a good chance to end their prolonged skid.

Cunningham scored 11 of his points in the first half and Detroit led by as many as 15 points in the second quarter when Hamidou Diallo's soaring dunk, set up by Cory Joseph's no-look bounce pass, made it 43-28.

But Ingram scored 11 of his 24 first-half points in the final 4:38 of the second quarter, including his 3 while being fouled by Saddiq Bey for a 4-point play. Soon after, Ingram hit two more free throws to briefly put New Orleans in front before Stewart's 16-foot pull-up put the Pistons ahead 55-54 at halftime.

New Orleans then stormed out of the game to start the third, opening with a 10-0 run that included 3s by Devonte' Graham and rookie Herbert Jones. The Pelicans' lead ballooned to 18 points when Alexander-Walker made a 3 and layup in succession.

Pelicans: Jones scored 10 points for New Orleans while Graham and Garrett Temple each scored nine on three 3-pointers apiece. ... Pelicans coach Willie Green said he expects to give more playing time to guard Tomas Satoransky in the wake of Kira Lewis Jr.'s major knee injury. "He’s earned it. He’s been playing better," Green said of Satoransky. "He’s a guy that’s done it for a number of years. He’s proven, but everybody has to step up." Lewis, a 2020 first-round draft choice, tore an ACL during Wednesday night's loss to Denver. ... Valanciunas accidentally elbowed official Bill Kennedy in the face while going up for a jump ball, knocking Kennedy to the floor.